In a direct attack on freedom of the press, the editor of the news site the Grayzone, Max Blumenthal, was arrested by police on October 25 on a fabricated charge related to events that took place at the Venezuelan embassy in Washington DC last May.

As reported by the Grayzone, “A team of DC police officers appeared at Blumenthal’s door at just after 9 a.m., demanding entry and threatening to break his door down. A number of officers had taken positions on the side of his home as though they were prepared for a SWAT-style raid.”

Blumenthal was then “hauled into a police van and ultimately taken to DC central jail, where he was held for two days in various cells and cages. He was shackled by his hands and ankles for over five hours in one such cage along with other inmates. His request for a phone call was denied by DC police and corrections officers, effectively denying him access to the outside world,” the report said. 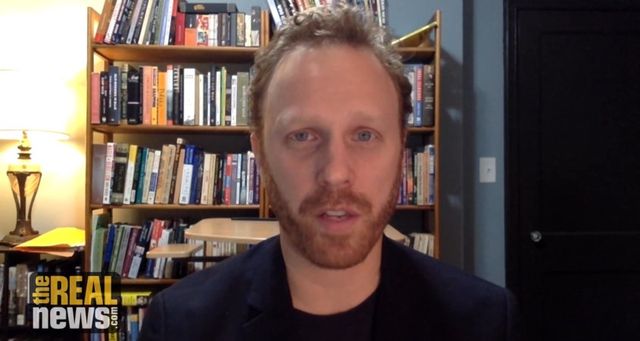 The Grayzone editor was eventually informed that he was accused of “simple assault” by a Venezuelan opposition member. In response Blumenthal said, “This charge is a 100 percent false, fabricated, bogus, untrue, and malicious lie. It is clearly part of a campaign of political persecution designed to silence me and the the Grayzone for our factual journalism exposing the deceptions, corruption and violence of the far-right Venezuelan opposition.”

The Grayzone also reported that the arrest warrant was five months old and it had been “originally rejected” by authorities. As Blumenthal explained, the charge was revived without notice. “If the government had at least told me I had a warrant I could have voluntarily surrendered and appeared at my own arraignment. I have nothing to fear because I’m completely innocent of this bogus charge.

“Instead, the federal government essentially enlisted the DC police to SWAT me, ensuring that I would be subjected to an early morning raid and then languish in prison for days without even the ability to call an attorney.”

As reported at the time on the World Socialist Web Site , a group of protesters occupied the Venezuelan embassy in Washington DC in April and May, during and in the aftermath of the abortive coup of self-proclaimed “interim president” Juan Guaidó. The protesters, who called themselves the Embassy Protection Collective, held a continuous vigil at the embassy in order to protect it from illegal seizure by US supporters of the failed coup conspirators.

The protesters had the support of the elected government of Nicolás Maduro and were invited to help keep the building open around the clock. At the peak of the affair, approximately 50 protesters were occupying and living inside the embassy.

In response to the occupation, a rival encampment of extreme right-wing supporters of Guaido’s US sponsors organized a de facto siege of the embassy in an effort to prevent people, food and supplies from making their way into the building.

As reported on the World Socialist Web Site, on May 16 hundreds of armed men in battle fatigues and helmets from the US Secret Service, DC Metropolitan Police and the State Department’s Diplomatic Security Service used battering rams to storm the embassy and evict the protesters.

Blumenthal was the target of a bogus charge and jailing against his rights because of his activity as a journalist. Throughout the occupation of the embassy, the Grayzone documented both the activity of the right-wing mobs that were assaulting and hurling racist invectives at the peaceful protesters.

The Grayzone reporter Anya Parampil and contributing writer Alex Rubenstein were inside the building and embedded with the protesters throughout the occupation. Max Blumenthal was also active on site in supporting the protest and extensively reporting on the events outside the embassy.

Among the reports filed by Blumenthal were coverage of the right-wing activists breaking into and vandalizing the embassy and their destruction of the embassy’s security system, while authorities stood by and did nothing. A critical aspect of the Grayzone’s reporting was the exposure of the coup regime’s “ambassador” to the US, Carlos Vecchio, and his corrupt relationship with the American oil industry along with his role as ringleader for the right-wing mobs attacking the protesters.

It is clear that the latest assault on Max Blumenthal is a continuation of the same overwhelming police force that is aimed at intimidating anyone who opposes the criminality of US imperialism and its extreme right-wing henchmen.

The Grayzone report explains that the false charge of “simple assault” originated during an event on May 8, when Blumenthal participated in an effort to deliver food and supplies to the peace activists inside the embassy. “The charge was manufactured by a Venezuelan opposition member who was among those laying siege to the embassy in a sustained bid to starve out the activists inside,” the report stated.

Blumenthal said, “I was not party to any violent actions around the Venezuelan embassy. This ginned-up claim of simple assault is simply false.”

Blumenthal was arrested a few hours after the Grayzone published an article on how the United States Agency for International Development (USAID) was funding the salaries of Guaidó’s team as they lobbied the American government.

As Blumenthal explained in response, “I am firmly convinced that this case is part of a wider campaign of political persecution using the legal system to shut down our factual investigative journalism about the coup against Venezuela and the wider policy of economic warfare and regime change waged by the Trump administration.”

Author, blogger and journalist Max Blumenthal founded the Grayzone in 2015 as an independent news website dedicated to original investigative journalism and “analysis on politics and empire.” He has written extensively on and criticized US foreign policy in the Middle East including the US regime change war in Syria. He is also among several independent journalists who have expressed “healthy skepticism” of Democratic Party claims of Russian interference in the 2016 US elections.

The assault on the Grayzone and Max Blumenthal is a serious attack on democratic rights organized by the US State Department and military-intelligence. It demonstrates that the illegal frame-up and persecution of Julian Assange for exposing to the world the crimes of US imperialism and the corruption of the American global capitalist enterprises is part of a political strategy by the ruling elites to silence any criticism or anyone who wishes to publish the truth.