Margaret Grace Richardson, a long-standing Greens member and Registered Nurse (RN) from Alice Springs in Australia, sent the following letter to Greens leader Richard Di Natale voicing her outrage at Assange’s treatment and the failure of Greens parliamentarians to fight his ongoing torture and extradition to the US.

I am writing to you to express my deep concerns for Julian Assange—Australian journalist and publisher. 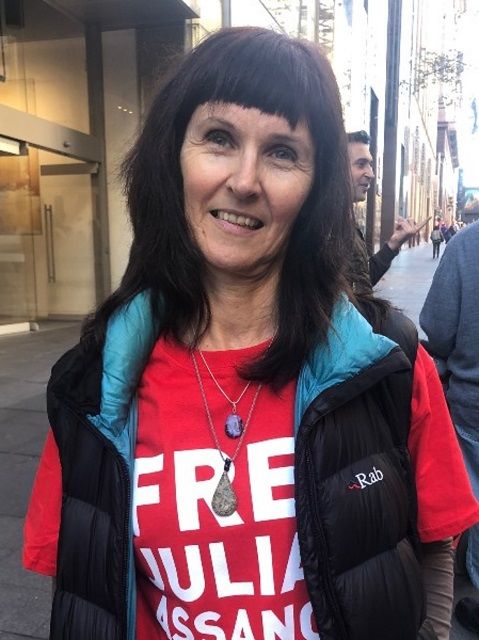 I am a Greens member, originally from the UK. I have been actively involved in Greens politics and voted Green since age 18. I have volunteered my time at every election since 1996 (pre, during & post-election). As a passionate activist for Greens issues, I have also been involved in many grassroots campaigns. I am an active, very committed advocate of Green policies and values.

I urgently wish to raise some important issues, and ask some pertinent questions of the Greens, in regards to Julian Assange. Currently Assange is incarcerated in the UK maximum security Belmarsh prison, (constructed for murderers and terrorists) held as a political prisoner, for the crime of being a journalist, and for exposing horrific WAR CRIMES.

I am disgusted and appalled about the harsh and cruel treatment that he is receiving there. His most basic rights have been eliminated. I am very concerned about his declining state of health. He is in solitary confinement up to 23 hours a day. He has only recently been allowed access to his computer, to form his defence, for God’s sake! He cannot speak to other prisoners. All he can do is sit and ruminate over the punishment that the USA Government— his persecutors—will dish out to him, should his extradition be allowed to go ahead.

This is “barbaric torture” (Nils Melzer UN rapporteur on torture, May 2019) and I am outraged that this is happening to him. Assange is being subjected to horrific human rights abuse. This is completely unacceptable to me.

Following a recent visit to see Julian, his brother Gabriel made a very emotional and heartbreaking speech at a rally, and, choking back tears, said that when visiting Julian “he hugged his brother, fearing it might be one of the last times he would see Julian alive.” Gabriel could see in his brother and hear in his voice, “Julian’s desperateness.”

All who visit Assange are alarmed by his decreasing level of health. Pamela Anderson reported, after seeing him in Belmarsh in May, that he had lost approximately another 15KG from his already thin frame. Anderson reports to be very concerned about his health. John Shipton (Julian’s father) fears he might die in prison, as do Assange’s lawyers.

John Pilger said. “We must not forget Julian, or we will lose him.” All visitors leave with grave concerns re his deteriorating physical and psychological health. He is not receiving justice, and ACTION must be taken soon. I too very much fear for his life. I agree with John Pilger, John Shipton, and Assange’s lawyers, and I share their concerns.

On various dates, during Assange’s asylum and subsequently his imprisonment, the Greens have made statements in his defence, but ultimately you have postured on his human rights being violated, and not intervened. These intermittent public statements, on their own, are certainly not enough. Assange is an Australian journalist and citizen and in danger. The gravity of this is increasing daily.

The recent NSW Greens motion in August 2019 condemned the Coalition’s failure to defend Assange. This has been met with silence at a Federal and State level. The motion called for Assange to be brought home and finish his sentence here. What crime has he committed?

He has committed NO crime. Assange’s legal team recently asked for parliamentarians to speak out in the defence of Assange. This has also been met with silence by the Greens. Why are you not avidly pursuing the requests of Assange’s lawyers?

Assange is being held as a political prisoner. That is undeniable now, and still no action from the Greens. You could be putting pressure on the Coalition to pardon him. Ultimately, you have abandoned Assange.

Democratic principles are seriously under attack. If Assange is extradited, this will change the democratic world forever. It will set a precedent, whereby journalists can be extradited to another country, if that country does not like what they say. This is a warning to other journalists and ANYONE who wants to oppose imperialism and war. We must have freedom of speech, otherwise there is no democracy.

Are the Greens defenders of democratic rights and free speech? If so, running a Greens public campaign would demonstrate that. We cannot sit back and allow Assange’s utterly inhumane treatment to continue, and I demand that the Greens party act now, put a stop to this human rights crime and slow assassination of Assange and take IMMEDIATE ACTION.

I am at a loss to know why the Greens are not holding a public enquiry, intervening and telling the government he must be pardoned. Why are you not asking the government to tell the UK to give an assurance against Assange’s extradition, using the USA/Australia “special relationship?”

I know I am not the only Greens member who is outraged, disappointed and angry by the lack of action by the Greens. I suspect there are thousands. There has been a swell of concern amongst Assange’s growing supporters since the court hearing on October 21. The blatant lack of process, demonstrated by Magistrate Baraitser, was reported upon by Craig Murray. He witnessed all the proceedings. Assange, one of the greatest men and minds of our time, could barely say or recall his own name, due to the level of psychological torture he is undergoing. The hearing should not have been permitted to go ahead, as Assange was incapable of following proceedings. Plans for the extradition hearing, to be moved to Belmarsh, amount to a “secret hearing.”

I do not want to hear any more statements that serve to placate the Greens voters. I want IMMEDIATE action, and the commencement of a very forthright and public campaign to:

2. Have his human rights reinstated—immediately.

I am reaching out to my political party to take action, before it is too late. I demand to know what action Richard Di Natale, Adam Bandt & Peter Whish-Wilson are actually carrying out, as part of the group of 11 cross benchers, to end this grotesque injustice towards an entirely innocent man.

If you fail to do this, I will view you as being another party that is part of the war machine, supportive of imperialism and elitists’ rule, and complicit in the slow assassination of Assange.

I look forward to your response.