Don Cherry, the former Boston Bruins coach and long-time intermission commentator on the iconic “Hockey Night in Canada” television broadcast, was fired Monday after delivering the latest in a decades-long string of right-wing, xenophobic rants on his Saturday night “Coach’s Corner” segment.

Cherry, who has built a reputation as an unapologetic booster of the Canadian military and the police, concluded his Saturday appearance with a tribute to Canada’s military veterans and war dead in the run-up to Monday’s nationwide Nov. 11 Remembrance Day ceremonies. Glorifying Canadian militarism and imperialist adventures has been part and parcel of radio and television sports and news broadcasts for over a century. But this time Cherry went too far, even for the Sportsnet and CBC executives who have coddled him and acquiesced to his poisonous outbursts for years.

Concluding his segment, Cherry complained that people in Mississauga and downtown Toronto (huge population centers with majority immigrant population) don’t wear poppies for Remembrance Day, unlike people in small town Canada. He then continued, “You people, you that come here, whatever it is, you love our way of life, you love our milk and honey, at least you can pay a couple of bucks for a poppy or something like that. These guys (soldiers) paid for your way of life that you enjoy in Canada, these guys paid the biggest price.” Ron Mclean, his co-host, nodded in approval and gave a quick thumbs-up. 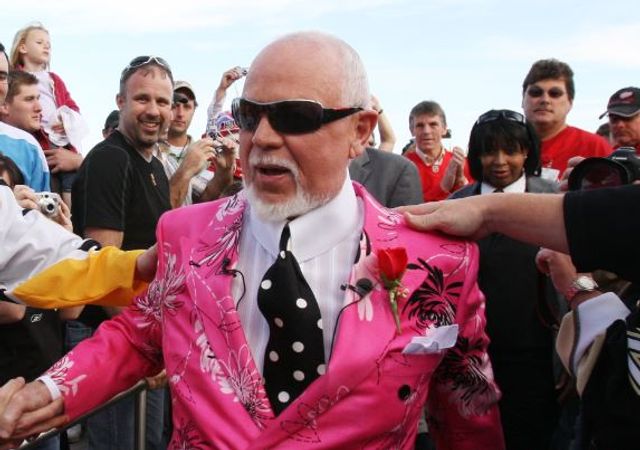 In the ensuing 24 hours, Sportsnet and CBC switchboards and social media feeds “lit up” with calls for Cherry’s firing. So many callers filed complaints with the regulatory Canadian Broadcasting Standards Council that the agency was technically overloaded and had to shut down its complaints section.

On Sunday, Ron Mclean made an abject apology for his “silence” during the broadcast and, at least temporarily, saved his job. As for Cherry, he subsequently stated that he had refused to accept Sportsnet’s conditions for continuing on the show, including a televised apology, and was therefore fired. After claiming to various news outlets that he might have “misspoke” but would nonetheless not issue an apology, Cherry appeared Tuesday on the far-right Fox News Tucker Carlson talk show in the US to claim that, in any event, the “silent majority,” including the police and military, agreed with him.

In all the controversy, which has been featured prominently by every Canadian news service, many have wondered, “What took the network executives so long to fire Cherry”? His right-wing outbursts are nothing new to viewers of “Hockey Night in Canada.” During the 38 years that the now 85 year-old Cherry headlined “Coach’s Corner” he routinely spewed vitriol against immigrants, “pinkos,” French Canadians, “foreigners,” peace activists, hockey players who don’t fight, gays, “lazy” native peoples and “yapping” women. In interviews, he has proudly characterized himself as “extreme right-wing,” and as a supporter of US President Donald Trump.

For most of those 38 years, the state-owned CBC network (and then Sportsnet, which is owned by Rogers Communications) reaped fat profits from their “Hockey Night in Canada” broadcasts, while shamelessly promoting the multi-millionaire Cherry as an authentic voice of “the common man” and even a “national icon.”

In recent years, however, Rogers Communications—which in 2014 took over CBC’s National Hockey League (NHL) broadcast rights—has been losing money on its $5.2 billion 12-year NHL deal. If Cherry was suddenly dispensable, it was clearly because the network executives calculated that, with the growing diversity of Canada’s population, he was becoming a ratings liability.

But there is more to this story than money. That Cherry’s downfall was bound up with Remembrance Day, rather than merely one of his “run-of-the-mill” rants targeting a minority demographic, was not happenstance.

The ruling elite is seeking to boost militarism and an aggressive Canadian nationalism, and views Remembrance Day as an important means of promoting a Canadian martial tradition. In its Nov. 11 editorial, “The poppy, new Canadians, and what Don Cherry should have said,” the Globe and Mail celebrated a “renaissance” in the observance of Remembrance Day “in the past couple of decades.”

The Globe editorial suggested this “renaissance” was due to some popular groundswell. Nothing could be further from the truth.

If, as the Globe claims, Remembrance Day has become “the country’s most meaningful civic occasion,” it is because the political establishment, the corporate media and big business have made it a focal point of their efforts to revive militarism. The celebration of Canada’s martial past—former Conservative Prime Minister Stephen Harper repeatedly proclaimed Canada “a warrior nation”—has served as a means of ideologically preparing and buttressing Canada's participation in a long and growing list of US wars, regime-change operations and aggressive military deployments. It has also been aimed at overcoming popular opposition to spending tens of billions on equipping the military with new fleets of battleships and war planes, and other high-tech weapon-systems.

An important element in the ruling class’s efforts to rally public support for Canadian imperialist rearmament and aggression is to promote the military as a “progressive,” ethnically and gender “diverse” institution, incarnating both the “diversity” and “unity” of the nation.

Cherry’s ignorant anti-immigrant tirade cut across this objective, all the more so given his long, well-known public identification with and promotion of the military, including numerous appearances with veterans.

The importance the Defence Department attaches to “diversifying” Canadian Armed Forces’ recruitment was highlighted in a report it issued last summer. The report said there was a pressing need to greatly increase the percentage of women, visible minorities, indigenous peoples and members of the LGBTQ community in the Canadian military: “In today’s complex security environment a diverse military is viewed as a strategic advantage.”

Nowhere in the media’s extensive coverage of Cherry’s latest anti-immigrant rant and the ensuing fallout has there been even a peep about a growing anti-war constituency, not only amongst the youth but amongst immigrant and refugee communities who have already seen their share of the horrors of war.

Instead, photographs have been produced showing Canadian immigrants wearing poppies. World War One and World War Two military casualty numbers, not just for Canada, but now throughout the British Empire/Commonwealth, have suddenly appeared on news sites. When, shortly after ceremonies concluded at the Toronto war dead Cenotaph on Monday, anti-war graffiti was sprayed on a monument, the national press went into an apoplectic frenzy, with nary a word about the growing threat of wars around the world that had motivated the vandalism.

There is certainly a justifiable desire among many working people to reflect upon and remember the victims of the imperialist world wars of the 20th century, not to mention more recent conflicts. But this stands in stark contrast to the reactionary goals and traditions of Remembrance Day—a commemoration initiated and perpetuated by the political elite and military top brass as a means of promoting militarism and patriotic flag-waving and justifying Canada’s imperialist foreign policy.

The reality is that the two world wars served as the means for the Canadian ruling class to ruthlessly pursue its interests, along with their allies, against their rivals and at the expense of working people who died by the tens of millions. War, the Canadian militarists insist, gives Canada “a seat at the table” when resources, markets and spheres of influence are divided up amongst the imperialist powers.

Remembrance Day—which pointedly commemorates only the Canadian war-dead and those of their allies—whitewashes and glorifies this militarist and imperialist tradition. The red poppy, used as a symbol to remember the dead, was inspired by the poem In Flanders Fields, written in 1915 by Canadian army officer John McCrae. It is an explicitly pro-war work, which culminates in a rousing call to arms and demands that Canadians “take up our quarrel with the foe.”

In the midst of all this militarist propaganda, workers and young people should recall that the events that ended World War I were not primarily battlefield victories, but first the October 1917 socialist revolution in Russia and then the workers’ uprising that overthrew the German Kaiser in November 1918. The Canadian ruling class, which during the war had imposed conscription, set up internment camps for “enemy aliens” (i.e., immigrant workers from Germany and Austria-Hungary) and ruthlessly suppressed dissent, was so terrified of the example of revolutionary Russia that it joined Britain, France, the US and other imperialist powers in invading the new workers’ state.

Many Canadian workers and youth are undoubtedly happy to see the back of the bigoted blowhard Cherry. That there is widespread opposition to his derogatory attacks on minorities is to be welcomed. But working people should beware of the establishment’s attempt to cast this as a “feel good story.” In jettisoning Cherry, the ruling class is pursuing its own predatory interests—the modernization and “diversifying” of Canada’s martial tradition and the Canadian Armed Forces, so as to promote the armed forces as a “national institution” and legitimize imperialist aggression.