Angry demonstrations have erupted across Australia following the death of 19-year-old indigenous man Kumanjayi Walker, who was shot and killed by police on Saturday night in Yuendumu in the Northern Territory (NT). The poverty-stricken community of about 1,000 people is about 300 kilometres northwest of Alice Springs. 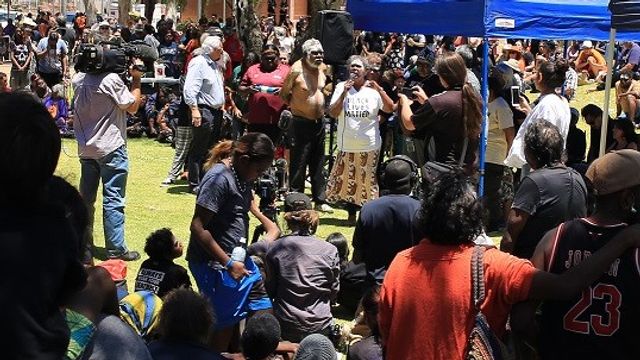 Part of the November 14 protest in Alice Springs

Walker was shot about 15 minutes after two police officers entered the home of the young man’s relative without a warrant at 7 p.m. over alleged breaches of a suspended sentence. They claim that Walker was “armed with a weapon” and “lunged” at an officer. This is disputed by witnesses and the young man’s family. Police fired three times at Walker, who died two hours later in the police station without receiving critical emergency care.

The police officers were wearing body cameras but authorities have yet to release any information about the alleged “weapon,” other than to say that it was “edged.” No other details about the incident, which has been officially declared a death in custody, have been made public.

According to reports, around 200 people—including Walker’s family—quickly gathered outside the police station after the shooting. Protestors asked for two family members to be allowed in the station. The police refused this request.

Community elder Eddie Robertson told the Australian Broadcasting Corporation (ABC): “When we heard what happened, the police were already on their way to the police station and they locked themselves in there.… They wouldn’t come out, they just looked at us from the window.”

On Sunday, Kumanjayi Walker’s cousin, Samara Fernandez Brown, told the media that the family “went to sleep on Saturday night thinking that he might still be alive because that’s what they [the police] told us. They said he was getting medical assistance… The whole time he was dead, just sitting there at the police station.”

Walker was not given any emergency treatment because the seriously under-funded local health clinic was shut on Saturday night. Authorities claim that medical staff had been withdrawn from Yuendumu because of a “series of break-ins.”

The health workers, who were staying about an hour’s drive away, were not directed to return until 7:30 p.m., and only arrived at the Yuendumu police station at about 8:30. Initial plans to despatch the Royal Flying Doctor Service, at around 7:42 p.m., were abandoned at 9:00 p.m. because Walker had already died.

The police did not issue a press release confirming Walker’s death until 6:53 a.m. the next morning—after police reinforcements had arrived in Yuendumu and almost 10 hours after he died.

On Wednesday, 28-year-old Constable Zachary Rolfe, a former member of the Army who had served in Afghanistan, was charged with one count of murder, after protests and solidarity rallies across Australia during the past four days.

Up to 1,000 people held a protest march and rallied in Alice Springs yesterday, demanding justice for Walker and his family. It followed demonstrations earlier this week in Yuendumu, Lajamanu, Tennant Creek, Pukatja, Alice Springs and in Darwin, the NT capital. Solidarity rallies were also held in major Australian cities, including Melbourne, Sydney, Adelaide, Perth, and the national capital Canberra.

Rolfe, who is suspended on full pay, was granted bail in an out-of-session court hearing and will reappear in an Alice Springs court on December 19.

Along with a coroner’s inquest into Walker’s death, there will be an Independent Commission Against Corruption inquiry, an internal police investigation and a police professional standards investigation. Previous investigations into deaths in police custody have ended as whitewashes and done nothing to end the ongoing police harassment of Aboriginal communities, and young people in particular.

The Northern Territory Labor government and federal government officials have attempted to dissipate the mass anger over the murder. They have feigned concern and offered empty platitudes to the Walker family, whilst publicly backing the police.

NT Labor government Chief Minister Michael Gunner declared on Wednesday that the police “who serve us day in, night out, keeping us safe … will be hurting and will need our support.”

Ken Wyatt, the Morrison government’s federal minister for indigenous Australians, flew into Alice Springs yesterday and told the media that “now was not the time for blame.” He met with several Yuendumu residents and brushed aside their calls for police not to be armed in remote indigenous communities, declaring that policing methods were determined by the NT government.

Alice Springs councillor Jacinta Price, a member of the Country Liberal Party, which is part the federal government Liberal-National Coalition, defended the police and said that the Walker family would be “working” with them.

In a live video posted on social media, Price, who is indigenous, denounced non-indigenous protesters, claiming that they were “interfering,” “hijacking” and “causing division” in the community.

“You are kardiya [white], this is not your family, and you need to go away .. I’m sick of protesters in my community. Sick of protesters using Aboriginal people and our circumstances for their own political means,” she declared.

Several indigenous leaders have hailed the murder charge against police officer Rolfe and embraced the official attempts to quell the mounting anger. Others are attempting to present the killing as a purely racial question, ignoring the widespread police brutality against workers of all backgrounds, and fostering illusions in the official investigations.

Irrespective of the outcome of these investigations, or the police trial, nothing will change for the overwhelming majority of Aboriginal people, the most oppressed section of the Australian working class and the victims of decades of state repression and government neglect and vicious social spending cuts.

The endemic unemployment and lack of the most basic social facilities, including access to proper health, education and proper drinking water, which blights Yuendumu, are typical of remote indigenous communities across Australia.

Indigenous Australians are the most incarcerated people in the world, accounting for only 3.3 percent of Australia’s population, but 27 percent of the total number of prison inmates, 22 percent of deaths in prison and 19 percent of those killed in police custody.

These repressive measures were first introduced by the Howard Liberal-National Coalition government in 2007, and rebadged as “Stronger Futures in the Northern Territory” by the Gillard Labor government in 2012. They have been maintained by subsequent governments.

While the Hawke Labor government’s 1987–91 “Royal Commission into Aboriginal Deaths in Custody” was supposed to end the killings, the fatalities continue. There have been over 420 recorded Aboriginal deaths in custody in the past 18 years. Not a single police officer has been successfully prosecuted over these deaths.

In 2002, senior constable Robert Whittington shot and killed Robert Jongmin in Wadeye, Northern Territory. Whittington was charged with murder but never found guilty or convicted of any criminal wrongdoing. He remains a sergeant in the NT police.

Less than eight weeks ago, on September 16, Joyce Clarke, a 29-year-old Yamatji woman, died after being shot at a home in Geraldton by Western Australian (WA) police. Local indigenous leaders attending her funeral, which was to be held today, told ABC media this morning that armed police were constantly patrolling the community and harassing youth.

Clarke’s death was the third fatal police shooting in WA in the past 12 months. In September 2018 two Aboriginal teenage boys drowned following a police pursuit in Perth.

The violent police attacks are not confined to the Aboriginal population. All sections of the working class, irrespective of their ethnic backgrounds or mental health, are being targeted by police. The police killing of 40-year-old schizophrenic Todd McKenzie in August, despite desperate pleas from his family, is just one recent example of the escalating brutal police assaults on working-class communities.