Madrid steps up repression in Catalonia after PSOE-Podemos government accord

Escalating repression against Catalan nationalist politicians and activists in recent weeks is rapidly exposing the “pre-accord” between the Spanish Socialist Party (PSOE) and Podemos to form a coalition government, widely promoted as an attempt to build a “progressive left” government.

In their accord, signed by Podemos General Secretary Pablo Iglesias and acting Spanish Prime Minister Pedro Sanchez of the PSOE, the two parties pledged to “make a priority of guaranteeing social peace in Catalonia and the normalization of political life.” The accord also commits Podemos to social austerity, estimated at around €10 billion according to the demands of the European Union, to obtain “fiscal justice and balanced budgets.”

As the WSWS has warned, pledges by the PSOE and Podemos to impose “social peace” in Catalonia mean intensifying repression in Catalonia as part of the broader campaign of the ruling class to build an authoritarian regime. 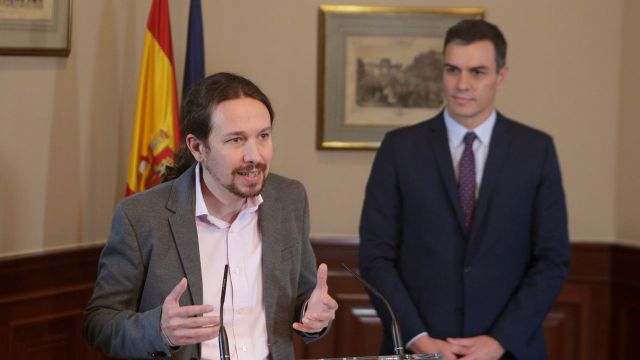 Last week, regional Catalan regional premier Quim Torra, faced charges of “disobedience” for not complying with an order by the Central Electoral Commission to remove a banner from the balcony of the Catalan government palace in support of imprisoned Catalan leaders. Torra admitted he disobeyed the order, arguing that the electoral board “had no right to issue such an order,” adding that “complying with an illegal order was impossible.”

The trial has been fast-tracked, in an attempt to bar Torra from office. In Torra’s words, “I challenged the [Central Electoral] Commission’s letters. Those challenges are in progress in the Supreme Court. It surprises me that we’re holding this trial without the other procedure having finished. But sometimes justice works very quickly and others, not at all.”

Torra only answered questions though his lawyer, to say he would not respond to the public prosecution service or fascist Vox party, which has brought its own private charges separately. Torra said that he would not answer a “Francoite party.” The judge interjected to defend Vox, denouncing “displays of offensive or disqualifying words to the parties” in the courtroom, and snapping: “I will not allow such disqualifications.” Vox is on record for supporting Francisco Franco’s 1936 fascist coup, his actions during the 1936-1939 Civil War, and the 1939-1978 Francoite regime.

Madrid is trying to remove the regional premier from office. This would make Torra the third premier to be barred from holding public office, after his two predecessors Artur Mas and Carles Puigdemont. Torra would, however, be the first to be banned from public office while still in power.

The case will in all probability end up in the Supreme Court, the same court which sentenced nine Catalan activists and politicians to between 9 to 13 years in prison over fraudulent “sedition” charges. The high court will therefore have in practice the ability to decide on the electoral calendar in Catalonia , as the removal of Torra would spark immediate elections. This would be the second time an election is held in Catalonia without being called by the regional premier, as legally stipulated.

The charges against Torra represent a further push by the ruling class to repudiate the democratic concessions made after the death of General Francisco Franco in 1975. During the Transition to parliamentary rule, the Madrid establishment agreed to make substantial concessions to the regional bourgeoisies to ensure their loyalty to the state machine. The Catalan nationalists were allowed to have a level of self-government, and Catalan language was allowed to be broadly and publicly used. In exchange, the Catalan bourgeoisie agreed that it would not seek separation and would support Madrid’s drive to enter the European Union, adopt the euro currency, join NATO and impose massive restructuring programmes which devastated the working class.

A decade after the 2008 Wall Street crash, this post-Transition regime is disintegrating, as the ruling elite turns back toward the authoritarian policies of the Francoite regime from which the Transition emerged. The PSOE and Podemos are playing a fundamental role in legitimising and actively supporting this process and opening the doors to fascist Vox, now the third party in parliament.

Last week, the leader of the Catalan section of the PSOE, the Socialist Party of Catalonia (PSC) led by Miquel Iceta, announced that they would present a proposal for a new linguistic policy for education in Catalonia, which includes language immersion in Catalan. Designed in the 1980s, after four decades Franco’s ban on the Catalan language, and made official policy since 1992, the system is based on the primacy of Catalan.

The policy’s stated aims were to avoid segregating children in accordance to the language they used at home, and to increase Catalan usage. It was regarded as the only system that could guarantee that Catalan children learn both Catalan and Spanish proficiently. Numerous studies showed that Catalan children having the exact same level of written and oral comprehension and writing competencies in Spanish than the average of the other Spanish-speaking regions.

Within Catalonia, the system enjoyed broad support among the population when it was designed, significantly among the Spanish-speaking working-class neighbourhoods composed of migrants from other regions of Spain. It was widely seen as a system which ensured equality in education. Over the years, a minority opposition emerged as it became clearer that the Catalan nationalists aimed to use it to support Catalan nationalism.

The fact that the PSC, which for decades has supported the immersion system and was key to providing it a level of legitimacy within mainly Spanish speaking working-class areas in Catalonia, is now revising this policy, is significant. It shows that the social democrats, backed by Podemos, are actively supporting the campaign of the far-right forces targeting Catalan institutions and the language as part of a broader policy of repression in Catalonia.

Over two years after the outbreak of the Catalan crisis, as the WSWS warned, the anti-Catalan campaign has proved to be an attempt by the ruling class to shift politics to the right to counter mounting social anger at inequality after a decade of EU austerity. The campaign is, in the final analysis, aimed at building a police-state regime whose main target is the rising militancy in the working class.

However, opposition cannot be mounted under the grip of the ruling parties like the PSOE and Podemos, who are supporting the campaign, or the Catalan nationalists, who are themselves deeply connected to the PSOE and working politically with it.

The Republican Left of Catalonia (ERC), a Catalan separatist party, has the power with its 13 seats in the Spanish parliament to provide the PSOE-Podemos coalition with a parliamentary majority and thus put it in power. The ERC is therefore in talks with the PSOE. The demand they are currently advancing as a precondition to support the PSOE is a nebulous proposal for the “creation of a negotiation table between Spanish and Catalan governments without conditions or vetoes.”

The PSOE has frequently reiterated that they will not contemplate any proposal for changes that are “outside the Spanish Constitution,” as a way of justifying the continued repressive policy in the region. Today, ERC is consulting its members as to what position it should take in the parliament.

The 2017 Catalan independence referendum in Spain