Fifteen months after the worst toxic chemical fire in Melbourne in three decades, the health implications for the firefighters sent to extinguish it are ongoing.

For 16 days, more than 750 Metropolitan Fire Brigade (MFB) firefighters, up to 200 at a time on 8- to 12-hour shifts, fought the fire that erupted on August 30, 2018 in West Footscray, a working class suburb. While fighting the fire they were exposed to an unknown cocktail of chemicals. 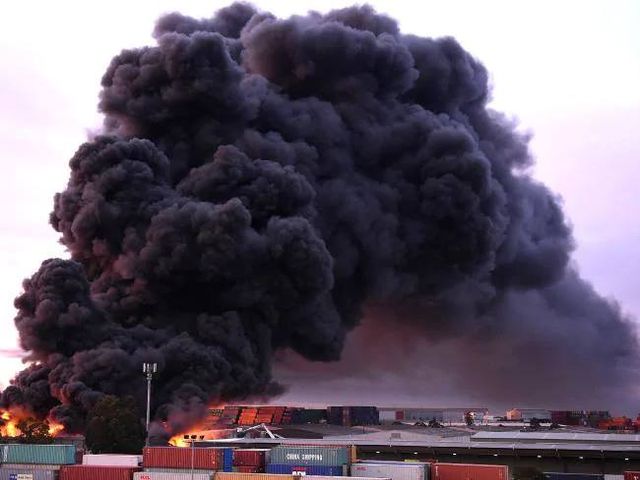 The fire in West Footscray in August 2018

Firefighters were told they were attending a pallet factory fire. What they confronted was described by a report in the Melbourne Age as “a toxic bomb the size of a football oval concealed inside a suburban warehouse.” It had set the adjacent Stony Creek ablaze as well.

Some of those present described their situation to the Age. One senior officer said: “I’ve been a firefighter for 43 years and that was the worst chemical fire I have ever been to.” Afterward, his tear ducts became infected, causing weeping for two weeks. The condition returned after six months.

Another firefighter said: “I could feel my skin burning under my helmet, breathing apparatus and gloves. When I took my gear off later, the fumes had given me like a sunburn.” Nearly five hours of blasting the fire with water made no difference to its ferocity. 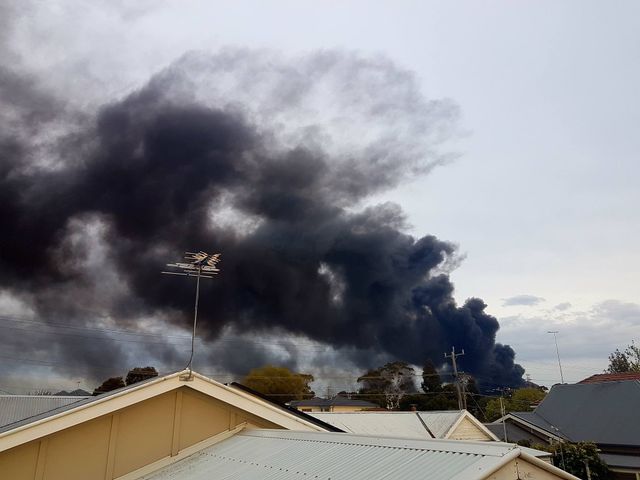 Smoke over the suburb of Footscray

Leading Firefighter Jason Dale said: “It felt like it was burning you: flames and explosions 40 to 50 metres into the sky; 44 gallon (166.5 litre) drums exploding like missiles, like meteors, over the top of us.”

When Dale returned to the station after his shift, “I had a smell on me, a metallic sort of smell, and it was in my mouth as well. I was brushing my teeth constantly to try to just have some normality.” In the aftermath of the fire, “I just vomited without warning, with no nausea… Just vomited—on five occasions.” He suffered “light-headedness, passing out, hitting the ground and not knowing where I was happened on numerous occasions.”

Even MFB communications officers a kilometre away reported a similar taste. Some had spontaneous nosebleeds in the weeks that followed.

Another firefighter said: “There were no safe zones, no cold zones on that job.” A support station inadvertently served contaminated food and drink to firefighters. Exhausted crew slept in trucks that were later declared too hazardous to enter.

Leading Firefighter Kat Dunnell said: “There are probably 20 to 30 firefighters who are still very sick and still living with their symptoms. You don’t know what you’ve been exposed to and you don’t know what effects it will have down the track. That does play on your mind. There’s an unknown and that fire was very unknown.”

Jeremijenko told the workers that two factors prevented firm diagnoses after such an incident. Firstly, tests can detect toxins only shortly after exposure, but most firefighters did not develop symptoms immediately. Secondly, it remains disputed what chemicals were inside the barrels that exploded in the West Footscray fire.

In June 2018, the local Maribyrnong Council and the MFB had inspected the premises for fire safety deficiencies, which included a lack of fire plans. According to the UFU submission to a Victorian parliamentary committee inquiry this year, the MFB asked Maribyrnong Council to enforce the state’s Building Act, but this did not happen. The council and the state government’s Environment Protection Agency (EPA) performed another inspection on August 9, just three weeks before the fire.

The UFU submission concluded: “As it stands, our members are being forced to attend fires that amount to a premeditated ambush. Such ambushes increase the risk of injury, illness and potential death of first responders due to the complete lack of warning or placarding to alert them to what they have to confront in the firefight that they have been deployed to… Essentially firefighters are being deployed blindly.”

This is a widespread problem in working-class areas. Between July 2018 and March 2019, WorkSafe, a state government dangerous goods regulator, said it carried out 2,000 inspections for “notifiable dangerous goods” and issued 497 compliance notices—mostly in Melbourne’s northern and western suburbs and Dandenong.

This October, over a year after the fire, the EPA and WorkSafe announced the discovery of up to 10 million litres of chemicals in barrels buried in the rubble of the West Footscray site. Up to 15 million cubic metres of contaminated soil and building debris has to be remediated.

UFU vice president Mike Tisbury told Australian Broadcasting Corporation Radio: “We’ve just been handed a list of chemicals from the EPA on 4 November. We’d like to have had the list a lot earlier. A lot of our firefighters have pretty significant health effects. Medical specialists have to know what they’ve been exposed to. It’s outrageous that we had to threaten legal action.”

Months of delays in assessing the West Footscray site passed, supposedly because the EPA and WorkSafe attempted to force a clean-up by a former tenant of the site, who has been linked to a dozen other illicit chemical stockpiles.

Above all, responsibility lies with the state Labor government of Premier Daniel Andrews. It just went into damage control following toxic fires at two northern Melbourne locations—SKM in Coolaroo in July 2017 and at Bradbury Industrial Services at nearby Campbellfield in April 2019—as well as the West Footscray fire.

This year the government has outlayed a token extra $15 million to the EPA, $29.5 million to clear a toxic stockpile at Lara and $34.9 million over three years to fix the associated water and recycling crisis. This is a miniscule response. The Lara stockpile alone could cost up to $100 million to clear.

In January, Victorian Attorney-General Jill Hennessy admitted that the Labor government had allowed the disposal of dangerous goods to be “self regulated.” In other words, the government has allowed waste disposal companies to dump toxic goods in residential areas with no regulation.

At a town hall meeting called by the Maribyrnong Council on the night of the West Footscray fire, angry residents demanded to know which regulatory agencies signed off on the toxic products going into the warehouse. Avoiding such questions, Labor Deputy Mayor Sarah Carter said people should not be alarmist and blame industry.

One resident replied: “We’re not against industry, we’re against the government and council that fail to regulate industry. Labor, Liberals and the Greens are in the pockets of the developers and big business.”

At the height of the fire, 10,000 litres of toxic chemicals and firefighting liquid spewed into Stony Creek per minute. This wiped out all wildlife and even bacteria for the entirety of the creek down to the mouth of the Yarra River.

One local resident, Clare Sheppard, a member of Friends of Stony Creek, told the parliamentary inquiry that she had to cease conducting weekly surveys of the impact of the creek’s chemical contamination because she became short of breath and developed nose bleeds that would last for days.

The Labor government has taken no coordinated action to determine whether residents have suffered long-term health damage. Its response underscores its preoccupation with protecting the profits of business and cutting public spending to satisfy the financial markets.

Likewise, while the UFU has publicised the damage to firefighters, it has organised no industrial action to demand that toxic chemical site registers are known to workers or to ensure the devastating health impacts on its members are not repeated.

Firefighters and all workers and their families, and residents, need to form rank-and-file committees, completely independent of Labor and the trade unions, to ensure that health and safety is the first priority in fighting fires, the disposal of toxic chemicals and the remediation of sites.