US President Trump has stepped up his trade war measures, lashing out at Brazil, Argentina and France, and has indicated he is in no hurry to conclude a “phase one” trade deal with China, making the imposition of new tariffs on $156 billion of Chinese consumer goods on December 15 a near certainty.

Comments by Trump in London yesterday, where he was asked by a reporter whether he expected a deal with China to be concluded this year, sent stock markets falling, with the Dow dropping 457 points during the course of the trading day, finishing down 280 points.

Responding to the question, Trump said: “I don’t have a deadline. I like the idea of waiting until after the election [in November 2020] for the China deal.” 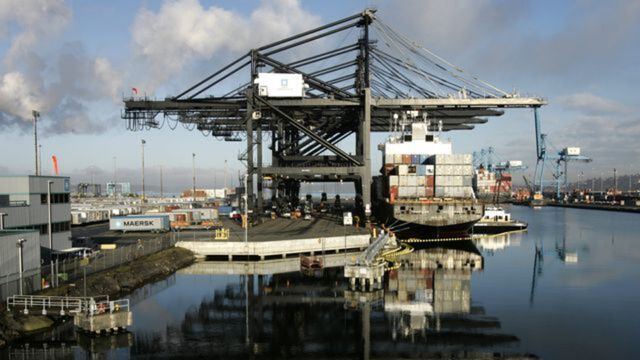 A container ship from Horizon Lines Inc. is unloaded at the Port of Tacoma Wednesday, Feb. 13, 2008, in Tacoma, Wash. (AP Photo/Ted S. Warren)

Speaking on the business channel CNBC following Trump’s comments, Commerce Secretary Wilbur Ross said the US would go ahead with its plan to impose tariffs on a range of imported consumer goods from China if no agreement were reached by the middle of this month.

On Monday, in a surprise tweet, Trump said he was reversing the exemption previously granted to Argentina and Brazil from tariffs imposed on steel and aluminium imports in 2018, citing a “massive devaluation” in their currencies which had hurt American farmers.

The move is directly related to the trade war against China. Exports of Brazilian soybeans to China have increased over the past year as China has cut back on purchases from the US. According to the US Department of Agriculture, Brazil supplied 77 percent of China’s soybean imports in the nine months to the end of May, up from about 40 percent previously.

Trump claimed the fall in the Brazilian and Argentine currencies had been “presided over” by their governments. In fact, it is a result of their weakening economies. But Trump took the opportunity to again call on the Fed to lower the value of the US dollar, raising the prospect of a currency war.

“The Fed should lower rates [there is almost no inflation] and loosen, making us competitive with other nations and manufacturing will SOAR! Dollar is very strong relative to others,” he tweeted.

The reference to manufacturing points to another consideration in Trump’s trade war escalation. As the Financial Times noted in an article earlier this week, “torpor” has descended on US manufacturing this year.

It said industrial activity had “stagnated across the US economy,” particularly in “several rust-belt states” that could determine Trump’s re-election bid next year, “in a worrying sign for the White House and its trade policies.”

Continuing industrial stagnation was also the message from data issued by the Institute for Supply Management on Monday, which showed that the purchasing managers’ index fell to 48.1 in November, down from 48.3, with readings below 50 indicating a contraction.

Commenting on the result, a Bloomberg report noted: “The figures show the manufacturing sector, while no longer in free fall, lacks upward momentum in an environment of corporate investment cutbacks, subdued global demand and a still-simmering US-China trade war.”

The move against Brazil and Argentina was immediately followed by an escalation of trade war measures against Europe, with the decision to impose an immediate 100 percent tariffs on up to $2.4 billion worth of French goods.

It was taken in response to a 3 percent digital services tax imposed by France on the revenue obtained by Google and other US digital companies from activities such as targeted advertising or running a digital marketplace.

In August, in response to a threat by the Trump administration to impose tariffs in retaliation for the tax, French and US officials reached an agreement that France would reimburse American companies if they ended up paying more tax than under a proposal being negotiated by the Organisation for Economic Co-operation and Development (OECD).

But that agreement appears to have been overturned as other European countries consider imposing national taxes along the lines of those levied by France.

A statement issued by US Trade Representative Robert Lighthizer made clear the retaliation may go well beyond France. He said the decision “sends a clear signal that the United States will take action against digital tax regimes that discriminate or otherwise impose undue burdens on US companies.

“The USTR is focused on countering the growing protectionism of EU [European Union] member states which unfairly targets US companies, whether through digital services taxes or other efforts that target US digital services companies.”

The office of the USTR is also considering widening the scope of a series of punitive tariffs, already imposed by the Trump administration on goods from the UK, France, Spain and Germany in response to a ruling by the World Trade Organisation earlier this year that subsidies to the aircraft manufacturer Airbus were illegal under WTO trade rules.

The imposition of tariffs against France received bipartisan support in the US. A joint statement issued by Charles Grassley, a Republican, and Ron Wyden, a Democrat, leading members of the Senate Finance Committee, said the French tax was “unreasonable, protectionist and discriminatory.”

In a news conference yesterday Trump made clear that under his “America first” agenda other countries should not be able to tax US firms on profits made from their international operations.

He questioned whether the US was still committed to the agreement reached at the G7 summit in August under which the tax would stay in place for two years until the decision of the OECD on a global minimum tax.

France’s junior finance minister Agnes Pannier-Runacher said France would not back down on the tax and had to be “pugnacious” in defending it.

The issue goes beyond France because all European countries are seeking to develop mechanisms to counter the efforts by the major digital companies to avoid taxes through transfer pricing and other forms of manipulation.

The UK may also become involved. In a statement issued on Tuesday, Prime Minister Boris Johnson said he would push ahead with a 2 percent tax on the revenues of digital services companies in Britain—a proposal which been criticised as “discriminatory” by US Treasury Secretary Steven Mnuchin.

Defending the UK proposal as Trump was preparing to land in London for the NATO leaders meeting, Johnson said “we need to look at the operations of the big digital companies and the huge revenues they make in the UK and the amount of tax they pay.”

No doubt Johnson made the comments with his eyes firmly fixed on the British election campaign in order to counter criticisms that he is a “poodle” of Trump in conditions where, according to an opinion poll released yesterday, one-third of the British population see the US as among the top five countries regarded as a danger to world peace and stability.

But electoral considerations aside, the escalation of the trade war by the US indicates that its targets are not only its chief “strategic rival,” China, but “friends” and “allies” alike.