Thousands of teachers strike in Croatia

Thousands of teachers have been on strike in Croatia for over a month. They are demanding increased wages and improved working conditions in schools and colleges, as well as better facilities for schools. The teachers’ strike is the biggest labor dispute in Croatia since the emergence of the state following the breakup of Yugoslavia almost 30 years ago.

According to the teachers’ union, 90 percent of publicly employed teachers are currently taking part in the strike. Last week around 20,000 teachers protested in the capital city of Zagreb, and their representatives have announced they intend to continue the strike until the government meets their demands. Initially, the strike was limited to a few days and focused on selected cities and towns. When the government failed to respond, however, teachers extended their protest to the entire country on November 19.

The Croatian prime minister, Andrej Plenkovic, from the right-wing HDZ (Croatian Democratic Union), declared that he was prepared to negotiate, but no agreement has yet been reached. Last Friday, the unions rejected a government offer to increase salaries by 10 percent in four stages beginning next year. 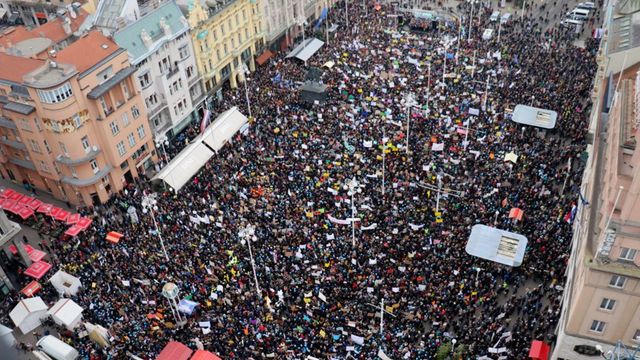 A total of 68,000 are employed in the education service and 240,000 in the entire public sector. Average wages for teachers are about 1,200 euros per month, and it is virtually impossible to provide for a family on such a salary. The cost of living in Croatia has become comparable to that of Germany after the country joined the EU, and this is why the strike is receiving broad public support. The rally last Friday was attended by many other public employees. Parents of students are also supporting the teachers’ demands, because their children are suffering from the miserable conditions prevailing in the schools.

It is the education sector which has suffered most from the series of spending cuts introduced in the past years and decades. Teachers are even worse off than other public sector employees. Successive governments in Croatia have implemented the same neoliberal policies aimed at dismantling social services and public services and institutions.

In the run-up to the entry of Croatia into the European Union in the summer of 2013, the EU laid down a series of demands in line with the austerity program it had pursued following the global economic crisis of 2008. The result was the almost complete destruction of social networks, and deindustrialization and privatisation on a grand scale.

The trade unions played a central role in this development. The country’s major unions have worked together with the government to impose cuts to services and jobs, and have nipped every protest in the bud. These organisations maintain close ties to the various right-wing and pro-capitalist parties in Croatia, and have only now called a strike following massive pressure from teachers.

Fresh talks between the government and the trade unions took place last weekend, aimed at ending the strike quickly. The unions are working together with the extreme right-wing government, which is hostile to the teachers. The HDZ was founded in 1989. It pursued an extreme nationalist course under its leader at that time, Franjo Tudjman, which plunged the former Yugoslavia into a bloody civil war. Despite all the party’s protestations that the HDZ has become a mainstream conservative party, this spirit of nationalism continues to prevail.

The government is carrying out a particularly brutal policy against refugees. Currently, about 8,000 refugees are stranded in Bosnia because Croatia either prevents them from entering its territory or illegally forces them over its border with Bosnia. According to the Border Violence Monitoring Network (BVMN), Croatian police and border guards have repeatedly used firearms against refugees. In mid-November, a police officer in Croatia shot and severely wounded one refugee.

According to the German news magazine Der Spiegel, the worst conditions in the country prevail “in the improvised tent camp Vucjak, which is located on a former rubbish dump near Bihac. Hundreds of people have been stranded there in crowded tents without electricity and hygienic facilities since July. Their only food is supplied by the Red Cross and private activists.”

Despite this intolerable situation, all of the country’s political parties and candidates participating in the presidential election due on December 22 are putting forward right-wing policies. Croatia’s acting president, Kolinda Grabar-Kitarović from the HDZ, is standing for a second term. Other candidates include former the social democratic prime minister Zoran Milanović and a prominent folk musician, Miroslav Škoro. The former HDZ politician has the support of ultra-right forces, and all of the candidates for the presidency are discussing the use of the military at the border.

The strike by Croatian teachers is not an isolated incident. Strikes and protests against intolerable living and working conditions imposed by a corrupt, reactionary ruling class are taking place with increasing regularity in Eastern Europe and the Balkans, most recently in Serbia, Albania, Kosovo and Montenegro. In neighbouring Slovenia, postal workers went on strike in November. According to the postal union, almost all of the country’s post offices were affected by the strike. Employees are demanding a pay rise of 10 percent and the hiring of 300 new employees. Currently Slovenian post offices employ around 6,300 workers.

At the beginning of October, about 600 workers at the Djuro Djaković industrial enterprise went on strike in Croatia after failing to receive their wages for the month of September. The company produces freight cars, tanks and other military equipment and has been in financial difficulties for some time. The government is currently negotiating with US and EU companies about possible new investors. Workers at the company are demanding the payment of outstanding wages and the resignation of the management.