Explosive conflicts over trade and military policy between Washington and its main European allies erupted this week at the NATO summit in London. Intended to mark 70 years since NATO’s foundation in 1949, after the United States had emerged from World War II as the dominant imperialist power, the summit instead descended into mutual recriminations and threats to impose billions of dollars in trade war tariffs between Donald Trump and French President Emmanuel Macron.

A new stage has been reached in the collapse of international institutions that long governed the affairs of world capitalism. Three years ago, divisions inside NATO surged as Britain voted to exit the European Union (EU), Berlin and Paris launched attempts to build an independent EU army, and Trump began to threaten Europe with trade war. Today, it is clear that NATO has no perspective to reduce, let alone overcome, these intractable internal divisions. It is instead escalating policies that pose an acute danger of world war.

Before the summit, the press was dominated by controversy over French President Emmanuel Macron’s interview in Britain’s Economist magazine, in which he declared NATO was “brain-dead” and called US policy on Russia the product of “hysteria.” Macron fueled the controversy, after a crisis meeting with NATO Secretary General Jens Stoltenberg Friday in Paris, by stating that NATO should not make enemies of Russia and China. Instead, Macron proposed to wage a “war on terror”—the pretext for France’s neocolonial war in Mali and its police-state repression at home. 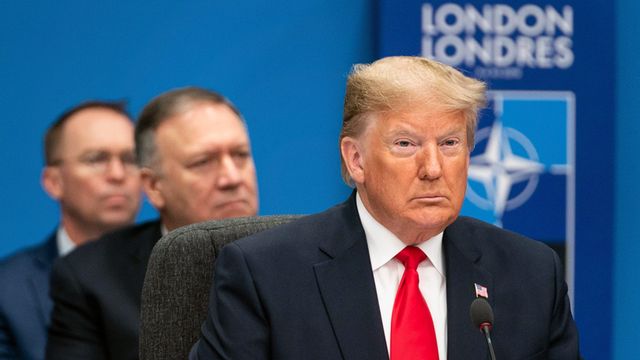 When Trump arrived in London, he launched a noisy tirade against his ostensible French ally, dismissing Macron’s remarks as “nasty” and “very insulting.” He then tried to whip NATO into line around a policy of military escalation targeting Russia.

On the eve of today’s French public sector strike, Trump also related Macron’s statement on NATO to “yellow vest” protests against the French president’s deeply unpopular austerity agenda. He said: “You look at what’s happening with the yellow vests... They’ve had a very rough year, and you just can’t go around making statements like that about NATO.”

This intensifies not only the danger of war, but also the crisis inside NATO itself. Underlying this crisis are objective, historically rooted conflicts between the imperialist powers that twice in the 20th century erupted into world war between them. Indeed, Macron’s Economist interview summarized widely held objections in European ruling circles to America’s constant resort to war to offset its growing economic weakness in the decades since the 1991 dissolution of the Soviet Union deprived NATO of its original common enemy.

Macron made clear that, as when Berlin and Paris opposed the unilateral US-led invasion of oil-rich Iraq in 2003, he sees US policies as a threat to European economic and military interests. He called Middle East policy an “enormous problem for NATO,” after the defeat of NATO proxy forces in Syria and Turkey’s invasion of the country to attack US-backed Kurdish militias.

Above all, he called for closer ties to Moscow: “If we want to build peace in Europe and rebuild European strategic autonomy, we must reconsider our position towards Russia.” Macron stressed that a key concern of his outreach to Russia was the imminent danger of global war, and that he aimed to “build relations to prevent the world from going up in a conflagration.” The French president traced NATO’s bankruptcy not to this or that tactical error, however, but to policies pursued over decades. Though an avowed opponent of socialism, he attacked the pro-capitalist propagandists’ “End of History” argument that the Kremlin’s dissolution of the Soviet Union spelled the final defeat of socialism and the triumph of liberal capitalist democracy. He admitted to the Economist that this false conception set the stage for unpopular NATO wars across the Middle East.

Macron said: “There was a pervasive conception that developed in the 1990s and 2000s around the idea of the End of History, an endless expansion of democracy, that the Western camp had won and would universalize itself. It was the history we were living until the 2000s, when a series of crises showed that it was not true... Sometimes we committed mistakes by trying to impose our values and change regimes without getting popular support. It is what we saw in Iraq and Libya, and maybe what was planned for Syria, but it failed. It is an element of the Western approach, I would say in generic terms, that has been an error since the beginning of this century.”

Whatever his differences with Macron, Trump recently made a similar point on America’s wars in the Middle East. He tweeted: “The United States has spent EIGHT TRILLION DOLLARS fighting and policing in the Middle East. Thousands of our Great Soldiers have died or been badly wounded. Millions of people have died on the other side. GOING INTO THE MIDDLE EAST IS THE WORST DECISION EVER MADE… IN THE HISTORY OF OUR COUNTRY! We went to war under a false & now disproven premise, WEAPONS OF MASS DESTRUCTION.”

NATO’s decision yesterday to nonetheless escalate militarist policies constitutes a warning to the working class. The basic contradictions of capitalism identified by the great Marxists of the 20th century, above all between world economy and the nation-state system, are explosively asserting themselves. Caught up in crises for which they have no solution, aware of their own political bankruptcy and criminality, and fearing growing opposition from below, the imperialist ruling classes are headed, eyes closed, towards a military catastrophe of horrific dimensions.

The key question facing workers and youth is the building of an international antiwar movement in the working class. Two years ago, analyzing the growing conflicts inside NATO after Brexit and Trump’s election, the WSWS wrote: “The force that will emerge as the alternative to the collapse of bourgeois politics is the international working class. It is being driven into action by intolerable conditions of life, mass unemployment, and social misery after decades of austerity and war.”

Two years later, this analysis has been vindicated by a resurgence of the class struggle. Today, France will erupt in the largest strike wave of Macron’s presidency.

Over the past year, hundreds of thousands of workers in the United States, Europe, Latin America, and Asia have gone on strike as part of a broad, international upsurge of political protest against social inequality and military-police repression. There have been mass strikes or antigovernment protests in Iraq, Lebanon, Algeria, Sudan, India, Sri Lanka, Bolivia, Chile, Catalonia in Spain and Puerto Rico.

This upsurge of class struggle forms the social base for opposing the war drive of the ruling elites. The necessary response to the imperialist war danger is to unify these growing struggles of the working class through the construction of a united, international socialist antiwar movement.