The way forward for the mass strike in France

On Thursday, over a million public-sector workers and youth went on strike and marched in protests against French President Emmanuel Macron’s pension cuts. Strikes by rail employees, teachers and other workers continued on Friday, bringing most public transportation to a standstill and closing many schools.

These events mark a new stage in the international resurgence of the class struggle. Once again, in the heart of Europe, the fundamental class lines in society are being drawn, and the working class is demonstrating its enormous social power and revolutionary potential. The frightened response of the international bourgeoisie was indicated by the headline of the New York Times’ report on Thursday’s mass strike: “A Day of Revolution in France, Targeting Macron.” 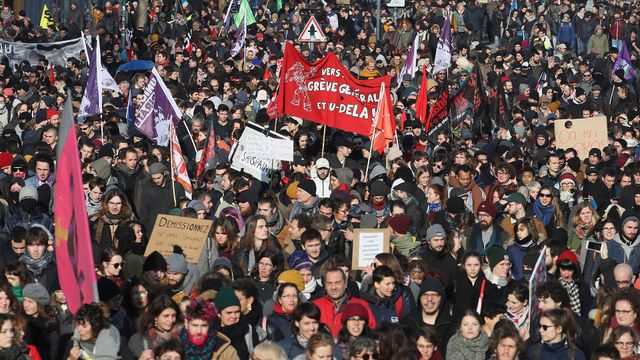 The fundamental issue in France—as in the mass strikes and protests in Chile, Bolivia, Ecuador, Lebanon and Iraq and the strikes by US and Mexican autoworkers and British rail workers—is the malignant level of social inequality produced by capitalism.

This eruption of class struggle has exposed all attempts to deny the revolutionary role of the working class and elevate race and gender above class as the basic division in society. As the initial movement in France has once again demonstrated, when workers move into struggle, they do so as a class.

This new stage of struggle raises critical political issues before the working class, most centrally, the need to build a new socialist leadership.

More than a year after the outbreak of mass “yellow vest” protests, none of the protesters’ main demands have been realized: for equality, better living standards and an end to social misery, police repression and war. Growing layers of workers are concluding that it is time to put an end to the domination of the financial aristocracy.

The ruling elite’s response can be summed up as: So much for democracy! On Thursday, Macron sent armored cars, water cannon and thousands of heavily-armed riot police to attack strikers marching in cities across France. A government operating without any popular support is mobilizing paramilitary police to crush protests against policies opposed by 70 percent of the population.

In France, as in every country, the capitalist state is a thinly veiled dictatorship of the financial elite.

The development of a strategy for the working class in this struggle requires a correct identification of its fundamental character and dynamic. Workers in France are fighting not only Macron, but global capitalism, sunk in its deepest economic and political crisis since the 1930s and facing an expanding upsurge of the class struggle.

The way forward is a fight to bring down the Macron government, drawing ever broader layers of workers and youth into struggle.

How is this to be done? A revolutionary political alternative must be established. Workers cannot limit themselves, as proposed by Stalinist General Confederation of Labor (CGT) union leader Philippe Martinez, to mounting periodic strikes demanding that Macron withdraw his pension plan, hoping that the president of the rich will negotiate new policies with the CGT. This will lead only to defeat.

It has been a half century since the last significant social concessions made to the French working class, as the CGT sold out the revolutionary opportunity posed by the French general strike of 1968 in exchange for the wage increases of the Grenelle Accords. Today, however, the economic and political crisis of capitalism is far deeper. There will be no reformist outcome of the class struggle.

Macron’s Republic on the March (LRM) party has repeatedly made clear that it will not back down.

After violent conflicts over military policy erupted at this week’s NATO summit in London, LRM is determined—in order to reinforce European defense and French economic competitiveness—to keep funneling hundreds of billions to the army and the super-rich. Allowing Macron to remain in power, even if he did pull back on his pension cuts, would only give him time to prepare the next stage of the social counterrevolution.

The CGT’s presentation of its strategy, echoed by petty-bourgeois groups like the New Anticapitalist Party (NPA) and Jean-Luc Mélenchon’s Unsubmissive France (LFI), is fraudulent.

The CGT did not decide this week to lead a struggle to defend pensions. In the course of a year of “yellow vest” protests, which the unions isolated and denounced as neo-fascist, the CGT discussed Macron’s planned pensions cuts with his government, knowing full well that they were massively unpopular. The CGT called for a strike only last month, in the midst of wildcat strikes on the National Railways and protests in hospitals and schools, fearing that the opposition could escape its control.

The CGT is collaborating with the state in an effort to exhaust and disorient workers and devise a sell-out. The ruling class is well aware of the CGT’s role. As riot police assaulted strikers in Paris, Lyon and other cities on Thursday, Prime Minister Edouard Philippe said, “Strikes and protests have unfolded as planned.” He took the opportunity to “pay respect to the unions for their organizational success.”

The way forward is to take the struggle out of the hands of the unions. The Parti de l’égalité socialiste (PES—Socialist Equality Party), the French section of the International Committee of the Fourth International (ICFI), calls for the formation of committees of action, independent of the trade unions and their political allies. In such bodies, workers and youth can plan out and vote freely on strikes, protests and other actions. They can appeal to their international class brothers and sisters for support in a revolutionary struggle against Macron and the financial aristocracy.

Against the diktat of the global financial markets and the escalating European military build-up, this appeal to the international working class is a burning necessity, as the ICFI explained in its 2018 statement on the “yellow vest” movement:

The explosive character of the events in France testifies to the enormous social contradictions that have accumulated over nearly three decades since the dissolution of the Soviet Union in 1991, and particularly over the decade since the crash of 2008. Intense hatred of capitalism and the conditions it has created in France and around the world—the staggering level of social inequality, the endless accumulation of wealth within a small percentage of the population, the ever-greater levels of poverty and suffering—is bursting onto the surface of political life… What is driving developments in France are not essentially national, but global conditions.

This assessment has been vindicated. This year has seen a global eruption of mass protests and class struggles. They have shattered postmodernist theories of middle-class “left populists” drawn from the post-1968 student movement, whose line is epitomized by André Gorz’s 1980 book, Farewell to the Working Class. In his 2014 book The Era of the People, Mélenchon declared that it was necessary to “get beyond” socialism. He said the left was “dead” and “the people takes the place that the ‘revolutionary working class’ occupied in the politics of the left.”

These discredited forces are turning decisively towards the right. This week, as masses of workers marched, Mélenchon reacted by promoting neo-fascist Marine Le Pen’s empty statement of support for the strike, calling it “progress” in a “humanist” direction.

The resurgence of mass strikes and protests around the world is showing again that the decisive revolutionary force in capitalist society is the working class, and that the revolutionary struggle for socialism is on the historical agenda.

The PES advocates the building of workers’ committees of action to mobilize the full industrial power of the working class, place the factories and workplaces under the democratic control of the workers, and expropriate the wealth of the financial aristocracy. This must be linked with a political strategy of forging the international unity of the working class to take state power and reorganize economic life on the basis of social need, not private profit.