Speaking via a live video stream from Moscow to The Right Livelihood Awards in Stockholm, Sweden on Thursday, Edward Snowden spoke strongly against the imprisonment and persecution of WikiLeaks founder-publisher Julian Assange and whistleblower Chelsea Manning.

Julian Assange is being held without charge by UK authorities in London’s Belmarsh prison, awaiting an extradition hearing at the request of the US government which has charged him with 17 counts of violating the Espionage Act. Assange’s health has deteriorated dramatically during his imprisonment in Belmarsh, which followed his arbitrary detention by UK authorities in the Ecuadorian embassy in London, where he was granted political asylum in 2012.

Chelsea Manning has been in prison at the Tisdale Federal Detention Center in Alexandria, Virginia since March on contempt charges for refusing to testify against Assange before a grand jury. Manning had already served seven years in federal prison for leaking to WikiLeaks the documents known as the “Iraq War Logs”, the “Afghan War Diary” and “Cablegate” that exposed the war crimes and diplomatic intrigues of US imperialism. 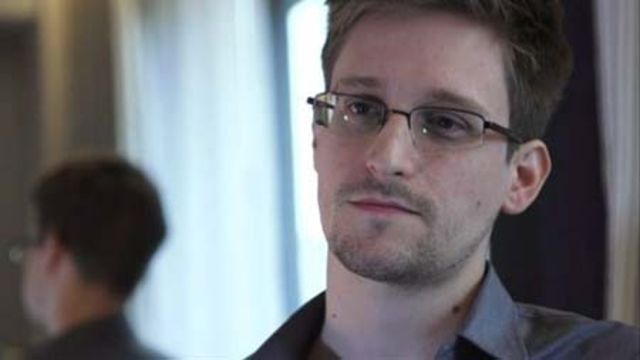 Edward Snowden was interviewed by Amy Goodman of Democracy Now before more than 1,000 attendees at the 40th anniversary of the awards program known as the “Alternative Nobel Prize.” The international awards were created in 1980 to “honour and support those offering practical and exemplary answers to the most urgent challenges facing us today.”

When Snowden received The Right Livelihood Award, it was presented to him “for his courage and skill in revealing the unprecedented extent of state surveillance violating basic democratic processes and constitutional rights.” In May 2013, Snowden sacrificed a lucrative job as an IT contractor for the National Security Agency (NSA) by disclosing to the public that the US government was violating basic democratic rights by storing all electronic communications.

Snowden then provided to the Guardian and the Washington Post a large trove of classified security and intelligence documents that proved the US government and its partners in the Five Eyes Intelligence Alliance were engaged, with the collaboration of telecommunications corporations, in a vast program of global surveillance.

Fully aware that he would be hunted down by the US state for his revelations, Snowden arranged to meet and provide the top-secret documents to journalists Laura Poitras and Glenn Greenwald in Hong Kong. From there, he sought asylum in Ecuador via Russian and Cuban airspace, but his passport was revoked by the US government and his international travel halted in Moscow after he was charged with two counts of violating the Espionage Act of 1917. Edward Snowden remains in Russia to this day under a grant of political asylum.

Amy Goodman began her interview with Snowden by asking him about how it was that he took the decision in 2013 to expose the US government’s global mass surveillance program to the public.

Snowden explained: “This was a new system that saw everything that you did and did not care or bear any regard whatsoever to the difference between those suspected of crimes and those who had done nothing wrong.

“This is a system, the first system in history, that bore witness to everything. Every border you crossed, every purchase you make, every call you dial, every cell phone tower you pass, friends you keep, article you write, site you visit and subject line you type was now in the hands of a system whose reach is unlimited but whose safeguards were not. And I felt, despite what the law said, that this was something that the public ought to know.”

Snowden’s statement elicited sustained applause from the Stockholm audience. Goodman followed up by asking him about what the US government has charged him with that forced his asylum in Moscow.

Snowden said he faces “persecution rather than prosecution” and that the likely sentence he faces in the US for telling the truth is “that I would die in prison.” He continued: “It’s not about me. It doesn’t matter what happens to me. I’ve done my part. I’ve said my piece. I could be the best person on earth, I could be the worst person in history and it’s not going to make a difference to your tomorrow. But what will is if people can tell the truth to the public about the most material facts and programs and policies that affect our lives every day.”

Again, this statement was met with enthusiastic applause. Lastly, Goodman asked Snowden about the imprisonment of Julian Assange in London and the jailing of Chelsea Manning in the US.

Snowden gave a review of how the Espionage Act has been used against individuals who have exposed the crimes of US imperialism, beginning with Daniel Ellsberg’s release of the Pentagon Papers in 1971.

“When you look at my case and the Manning case before me, and when you look at the Ellsberg case going all the way back to the 1970s, they are all derived from the same law under which Julian Assange—who, it should be clear, owes no allegiance to the United States; he is not a U.S. citizen, he is simply a publisher working in news—they have been charged under this Espionage Act. This is a special law that absolutely rules out any kind of fair trial going back to the 1970s.

“When Ellsberg tried to tell the jury why he did what he did, his lawyer asked him, ‘Mr. Ellsberg, why did you copy the Pentagon Papers?’—which was the secret history of the US’s true involvement in the Vietnam War—the prosecutor for the government said, ‘Objection! This is not something the jury is allowed to hear.’ And the judge agreed with it. He silenced Ellsberg. And he silenced our ability to hear why these things were done, and for the jury to consider not only was this legal but was it moral.”

Snowden reviewed the connection between the Pentagon Papers, the war crimes exposures of Chelsea Manning and his own revelations about NSA mass surveillance.

“What began with Ellsberg as an extraordinary case against a lone individual which challenged the government’s involvement in the war was challenged by a new generation of whistleblowers like Chelsea Manning who revealed torture and war crimes, indefinite detention on the part of the United States government in places like Iraq and Afghanistan and Guantanamo Bay in Cuba, my own involvement in the revelation of global mass surveillance.

“And in every case, we were charged under this same law that forbids the jury to consider if this was something that did more good for the public to know than it did harm to the government in terms of inconvenience or theoretical risks of investigative journalism in a free society.”

Significantly, Snowden pointed to the accelerated use by the Democratic administration of Barack Obama of the Espionage Act to charge whistleblowers. He said: “And this is where we get to this crucial part of the story. We move from an individual and exceptional case that was not repeated for decades and decades in the Ellsberg instance, to something that under the Obama administration, he charged more sources of journalism using this special law than all other presidents in the history of the United States history combined.”

Finally, Snowden drew important conclusions about the Trump government’s effort to extradite Assange to the US.

“And now under the Trump administration, we have taken one more step. We have gone from the United States government’s war on whistleblowers to now a war on journalism with the indictment of Julian Assange, for what even the government itself admits was work related to journalism. And this I think is a dangerous, dangerous thing, not just for us, not just for Julian Assange, but for the world and the future.

“If we allow developed democracies to imprison their political critics and dissidents, the people who call into question the legality, the propriety, the morality of their policies and the prosecution of their wars, we will embolden the most authoritarian regimes on earth. And we will be the ones who our children question when they ask how the world that they were inheriting came to be.”

Snowden’s clear defense of Assange is all the more important to highlight under conditions in which the corporate media and sections of the international political establishment have sought to drive a wedge between the NSA whistleblower and the WikiLeaks publisher. Although there are important differences of political outlook between Snowden and Assange, it is clear that Snowden depended upon WikiLeaks to avoid arrest and prosecution by the US government, and advocates for an end to his persecution and the restoration of his freedom.

As Snowden explains in his biographical book Permanent Record, he was given critical support and assistance from WikiLeaks editor Sarah Harrison during his efforts to seek asylum, after turning over the NSA documents to Poitras and Greenwald in Hong Kong. Explaining his relationship with Harrison and WikiLeaks, Snowden wrote: “Through her experience with the website and particularly with the fate of Assange, she was poised to offer me the world’s best asylum advice …

“People have long ascribed selfish motives to Assange’s desire to give me aid, but I believe he was genuinely invested in one thing above all—helping me evade capture. That doing so involved tweaking the US government was just a bonus for him, an ancillary benefit, not a goal.”

As the Stockholm interview shows, Snowden’s defense of Assange is based upon objective considerations. He recognizes the continuity between the vindictive prosecution of whistleblowers such Manning and himself and the open attempt to silence, if not kill, Julian Assange. The persecution of these courageous individuals is at the forefront of the attack on democratic rights by the US government and its allies, and a brutal attempt to intimidate all those who would tell the public the truth about the crimes of imperialism.