Five people are dead and eight missing, presumed dead, after a volcanic eruption on White Island, also known as Whakaari, in the Bay of Plenty, off the coast of New Zealand’s North Island. Another 31 people are in hospital, many with serious burns, and reports indicate that some may not survive.

The small, uninhabited island is one of New Zealand’s most popular tourist attractions, with 17,500 visitors last year. It is the country’s most active volcano.

Forty-seven people, reportedly from two separate tour groups, were on the island when the crater suddenly erupted at 2:11pm on Monday producing a huge cloud of rock and ash. Several tourists were photographed shortly before the eruption standing near the crater. Most were from the visiting cruise ship Ovation of the Seas, owned by Royal Caribbean International, and were being guided around the island by White Island Tours. Two guides are thought to have died. A few visitors were part of a helicopter tour by Volcanic Air.

The identities of most of the victims have not been revealed, but reportedly they include people from New Zealand, Australia, the UK, China, Malaysia and the US. The injured were evacuated by boat and helicopter. One survivor who gave first aid to the victims, Geoff Hopkins, told the New Zealand Heraldthat almost all were “horrifically burnt” and in agonising pain, with some drifting in and out of consciousness. 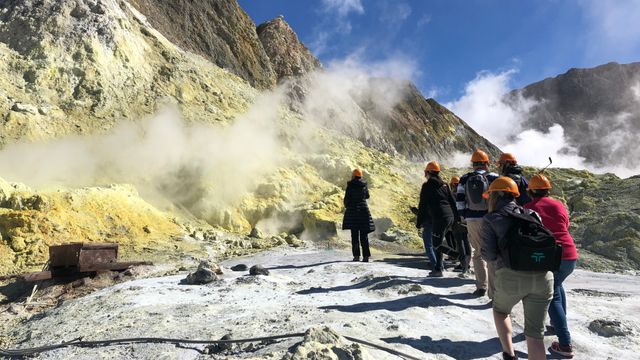 Conditions remained too hazardous today for search and rescue teams to explore the island. Bodies were sighted this morning by reconnaissance flights. There is a risk of further eruptions and landslides.

The full circumstances of the tragedy are yet to emerge, but questions are already being raised about why visitors were allowed on the island.

Professor Ray Cas, a volcano expert from Monash University, told Sydney’s 2GB radio station that he had felt for years that White Island “is a dangerous place to allow the public to visit.” He noted its isolation, 50 kilometres offshore, with “no emergency services immediately available” and no means to escape in the event of an eruption, which can happen without warning. Tour groups typically explore inside the crater, which was transformed on Monday into a horrific inferno.

GNS Science, a government agency monitoring seismic activity, raised the alert level for White Island from 1 to 2 due to increased seismic activity on November 18, indicating that eruptions were more likely than normal.

Professor Shane Cronin, a vulcanologist at the University of Auckland, told Radio NZ that GNS could issue advice and warnings, but had no authority to stop people visiting the island, which is privately owned by the Buttle family. He said “people often underestimate” the volcano and “we’ve probably taken it a little bit too much for granted.”

Tours have been taking place for about 30 years and there have been several minor eruptions over that time, none of which resulted in casualties. This appears to have been purely by chance.

White Island Tours’ website was shut down following the eruption. Previously, it carried a warning that due to “heightened volcanic unrest, there is the potential for eruption hazards to occur” on the island. But this did not prompt it to suspend the tours, which are highly profitable. The Herald reported in February that the company, owned by Maori tribe Ngati Awa, “enjoyed a significant revenue increase from $0.5m to $4m between 2017 and 2018.”

In an interview with Prime Minister Jacinda Ardern, Radio NZ’s Kim Hill bluntly stated: “It does seem crazy to make it so accessible given that it’s an unpredictable live volcano.” Ardern replied that she would not make “assumptions” and promised an eventual “inquiry” into the disaster. She declared that New Zealand took “pride” in keeping visitors safe.

In reality, there have been many avoidable tragedies in New Zealand’s tourism industry, which is the country’s largest industry in terms of foreign exchange earnings. Successive governments have cut back on regulations and allowed companies to essentially self-regulate their safety procedures, placing lives in danger.

These include the country’s worst-ever disaster, the 1979 plane crash at Mount Erebus in Antarctica, which killed 257 people. A subsequent royal commission of inquiry found that Air New Zealand had jeopardised the safety of the crew and passengers, then sought to cover up its safety breaches. No one was ever held legally accountable.

In 1995 a viewing platform collapsed at Cave Creek in Paparoa National Park, killing 14 people. The Minister for Conservation was forced to resign after an inquiry found the platform had been built by unqualified workers and was extremely unsafe.

There are frequent jet-boat crashes, including one in Queenstown in February 2019 which injured nine tourists, and another in March which killed one person in Fiordland National Park. In May, Auckland Jet Boat Tours Limited was fined $25,000 and ordered to pay reparations after admitting illegal and unsafe practices which led one passenger to break her collarbone in 2017.

The political establishment and much of the media have rushed to defend the Labour Party-NZ First-Greens coalition government and tourism businesses over the White Island eruption. Opposition National Party leader Simon Bridges declared, “I think it’s right to let the recovery happen before the serious questions are asked in earnest.”

The Daily Blog, which is funded by three trade unions, agreed that debate over the causes must wait until “after the bodies have been recovered.” Editor Martyn Bradbury gushed, as he did following the Christchurch mass shooting: “Every time there is a shock to us as a nation, Jacinda [Ardern] steps up with such amazing empathy & sympathy—she leads with healing & courage & in times as sad as this, she is constantly the silver lining. This is what political leadership looks like.”

There is rising anger, however, among the victims’ relatives. The brother of Whakatane man Hayden Marshall-Inman, who was killed in the eruption, said it was “Pike River all over again,” a reference to the 2010 Pike River coal mine disaster, which killed 29 men. He told Stuff that the family had not been contacted by authorities regarding recovery of bodies.

The experience of Pike River is a warning that any investigation by the government into the causes of the White Island disaster will be a whitewash, aimed at defending those responsible for the lack of safety procedures. Nine years after the coal mine exploded, no one in Pike River’s management has been held accountable, despite overwhelming evidence gathered in a 2012 royal commission that the company ignored warnings that the mine was a death trap. Politicians of every stripe, along with union bureaucrats, government regulators, the courts and the police, all helped to shield company leaders from justice.