Over 800,000 workers and youth across France marched in protest against President Emmanuel Macron’s pension cuts yesterday, while rail and mass transit workers and broader sections of the public sector workforce continued strikes launched on December 5. 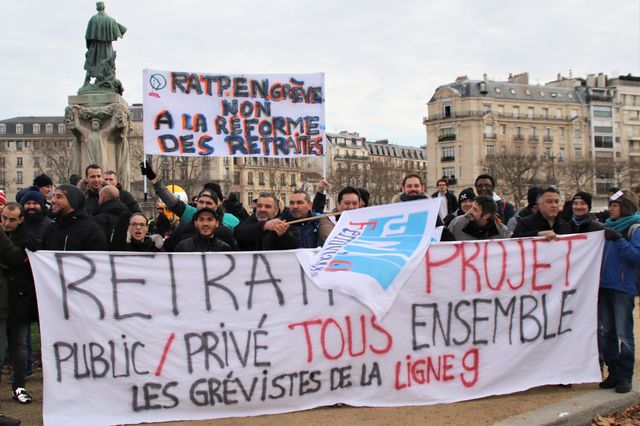 The strike movement in France comes amid a powerful international upsurge of working class struggle and political opposition. Strikes are mounting in protest against the December 12 elections in Algeria as part of a mass movement in opposition to the military regime, following strikes by rail workers in Britain, walkouts by autoworkers and teachers in the US, and a wave of mass protests from Lebanon and Iraq to Chile, Bolivia and Ecuador. Under these conditions, the growing political opposition to Macron’s austerity measures is rapidly developing into a trial of strength between the working class and the government.

The strike is again demonstrating the vast social power of the working class. French train traffic and mass transit in Paris remain virtually shut down, and over 10 percent of public school staff are on strike. On Tuesday, large groups of high school and university students joined the protests throughout France.

Yesterday again saw major strikes in the energy sector. Seven of France’s eight oil refineries are on strike and blockaded, raising the possibility of petrol shortages at service stations, especially since truck drivers may go on strike next week. Around one quarter of Electricité de France workers also struck, reducing energy generation at France’s nuclear power plants by 6,000 megawatts.

A section of the strike

The Stalinist General Confederation of Labour (CGT) announced that 880,000 workers and youth had marched in rallies across France, including 160,000 in Paris. There were large rallies in a number of other cities, including Lille, Lyon, Marseille, Rennes, Nantes and Toulouse. There, marchers protested against police repression by holding up pictures of Odile Maurin—a handicapped woman banned from protests after heavily armed riot police accused her of assaulting them with her wheelchair.

Among workers, there is not only deep anger at Macron, but also growing distrust of the unions, which promise to improve his pension reform in negotiations with him. As so many times in French history, the CGT is seeking to lead workers into a blind alley via a strategy of negotiating with a capitalist government hostile to the working class. But the Macron government is stressing that it will make no essential changes to its plan to cut pensions and other critical social programmes, including health care and unemployment insurance.

The only way to halt these attacks is to mobilise broader layers of the working class and youth in a struggle to bring down Macron, appealing to workers internationally for support. This means workers taking the struggle out of the hands of the unions by building their own committees of action to coordinate the strike movement independently of the nationally based union bureaucracies, which are working closely with the Macron government. It is increasingly clear to broad layers of workers at the protests that these organisations offer nothing.

Marie-Hélène, a nurse working in Paris, spoke with World Socialist Web Sitereporters at the Paris rally and explained that she saw the strike as a response to a decades-long, international drive by the financial aristocracy to impoverish the working class. 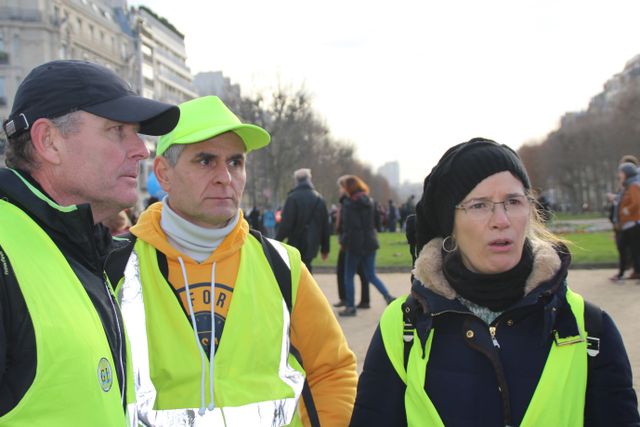 She said, “I’m going out, very simply, because my pension will fall below €1,000 a month. But in France you cannot live on less than €1,000 a month. … We have seen over the last several decades in France and worldwide the development of an ultra-free market policy, where everything goes to profits and capitalism in general. The first victims are the workers, and every country is affected. France perhaps got more coverage because we put on yellow vests, but every nationality around the world is hurt by this.”

Marie-Hélène stressed that the way to stop the cuts was to continue mobilising the workers despite the unions’ attempts to negotiate a rotten compromise with Macron. “There is nothing to negotiate with Macron, though it appears that the union leaderships intend to do so,” she said. “But we are the workers, and we say firmly and clearly: this reform will not pass. We will stay out on the street as long as it takes, but this reform will not happen.”

Marie-Hélène, who has joined “yellow vest” protests for over a year, expressed her contempt for allegations in the media that the “yellow vest” movement is neo-fascist. She told the WSWS: “I am a nurse. Honestly, can I be a fascist? Frankly, these accusations are just made up. All my friends and I are calm and decent people. We would never have gone into the street if these reforms were not profoundly harmful.”

Anger is growing against the obscene levels of social inequality produced by capitalism. The WSWS spoke to Yoann and Martin, two Paris-area schoolteachers who calculate that Macron’s pension cuts would reduce their pensions by as much as €500 per month. Referring to Bernard Arnault, the world’s wealthiest man, who increased his wealth by €23 billion in 2018, Yoann said, “It is disgusting, obviously, when we have to count every penny or even finish the month in the red.” 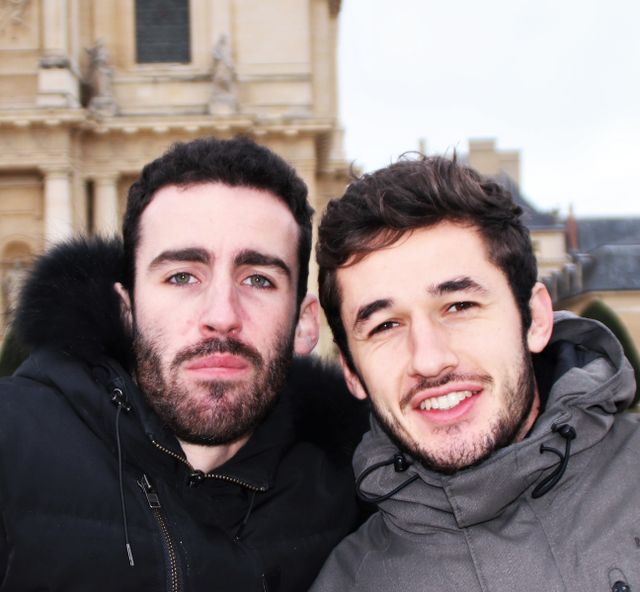 Students in working class areas struggle, moreover, with overcrowded, ill-funded schools. “Families can’t make it to the end of the month,” Yoann said, adding, “It breaks your heart to see a student who wants to play sports, but that costs €25 and the family cannot pay for it.”

James, a salesman, told the WSWS why he distrusts union leaders like CGT General Secretary Philippe Martinez: “In fact, these people are part of the system, their unions get vast state subsidies. What has moved back into struggle is the workers below. … People like Martinez, they are part of the system. So they negotiate, but what does that mean, what comes out at the end of their negotiations? Nothing. People are in just as much trouble as before, but as for them, they will still have their position and a nice life.”

These remarks point to the unbridgeable class gulf that has emerged between the workers on the one hand and the financial aristocracy and state officials and union bureaucrats who together negotiate policy on the other.

Prime Minister Edouard Philippe will give a press conference today to try to sell the pension cuts to the French people. With 67 percent of the population opposing the reform and 59 percent declaring that Macron is to blame for the strike as he obstinately pursues an unpopular policy, there were mounting calls in official circles for the government to explain its policy clearly to the public.

Philippe himself played down expectations yesterday in a closed-door meeting with legislators of Macron’s Republic on the March (LRM) party. The meeting made clear that LRM, contemptuous of public opinion, is proceeding with its cuts.

“There is no magic speech,” he said, adding, “Protests will not stop just because I give a speech on Wednesday. My speech will, in fact, provoke new concerns, and that is normal.”

This only confirms that there is nothing to negotiate with the Macron government, and the only way forward is a struggle to bring it down.