In a glaring act of political censorship, media corporations in the English-speaking world have maintained a complete silence on a powerful open letter by journalists and media workers issued last weekend demanding the unconditional freedom of Julian Assange.

The blackout occurs under conditions where doctors have warned that Assange’s health has deteriorated to the point that he may die in Britain’s maximum-security Belmarsh Prison.

It comes in the lead-up to hearings next February for the WikiLeaks founder’s extradition to the United States, where he faces Espionage Act charges and life imprisonment, for having published the truth.

As the journalists’ note, the case “stands at the heart of the principle of free speech. If the US government can prosecute Mr. Assange for publishing classified documents, it may clear the way for governments to prosecute journalists anywhere, an alarming precedent for freedom of the press worldwide.” The corporate media outlets, however, which frequently proclaim their commitment to press freedom, are unmoved.

The censorship is all the more striking, given the rapid support that the initiative has gained.

On Saturday, there were fewer than 200 signatories. In the space of a few days, hundreds more journalists from around the world have put their name to the document, which insists on an immediate “end to the legal campaign being waged against” Assange “for the crime of revealing war crimes.” There are currently 610 signatories and the list is growing by scores every day. 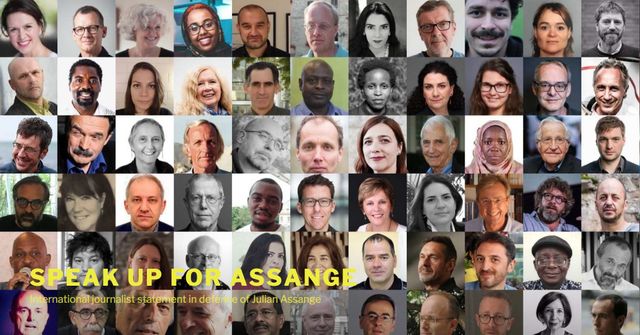 Despite this, a Google News search for “Assange journalists’ letter” currently only returns reports from the World Socialist Web Site, a handful of other alternative publications and several regional Australian newspapers.

Broadcasters and publications with employees who have taken a principled stand and signed have not reported on an initiative being supported by their own journalists.

Four current employees of the state-funded Australian Broadcasting Corporation (ABC), for instance, are signatories, but there is no mention of the letter among the dozens of articles published online by the ABC every day.

The ABC signatories are not minor figures. They include Peter Cronau, a senior journalist and one of the producers of the flagship “Four Corners” program; Sean Murphy, a journalist and producer; Dylan Welch, a well-known investigative reporter and Cate Carrigan, a broadcast journalist at ABC Radio.

Some of the most prominent journalists of the Australian media industry have also taken part, including former ABC investigative reporters Andrew Fowler and Quentin Dempster, and Kerry O’Brien, the current chair of the Walkley Foundation, which awards the industry’s most prestigious annual prize.

Together, their comments on world events and political developments are frequently reported as significant and noteworthy. But not in this case.

The silence from the ABC is replicated by the Murdoch-owned Australian newspaper, Nine Media’s Sydney Morning Herald and Age publications, and by the television broadcasters. Significantly, all of them are participants in a multi-million dollar “Your right to know” advertising campaign, purportedly being waged in defence of press freedom, whistleblower rights and against increasing government secrecy.

Similar case studies could be conducted for virtually every country in the world, including Britain, the country where Assange is imprisoned, and the United States, the centre of the campaign against him.

Assange’s plight, moreover, which concerns the fate of the world’s most famous political prisoner and which has vast implications for democratic rights everywhere, is global news. The signatories include major international figures such as Noam Chomsky, John Pilger and Pentagon Papers whistleblower Daniel Ellsberg.

The censorship can only be understood as a political decision. It is a continuation of the shameful nine-year collaboration of the corporate media with the US-led campaign to vilify, persecute and silence Assange, for having exposed American war crimes, global diplomatic conspiracies and mass spying operations.

The letter is inherently newsworthy, but it hits too close to home, precisely because it exposes the role of the corporate press.

The journalists cite United Nations Special Rapporteur on Torture Nils Melzer, who explained earlier this year: “It finally dawned on me that I had been blinded by propaganda, and that Assange had been systematically slandered to divert attention from the crimes he exposed. Once he had been dehumanized through isolation, ridicule and shame, just like the witches we used to burn at the stake, it was easy to deprive him of his most fundamental rights without provoking public outrage worldwide.”

The media workers who have signed the letter draw their inspiration not from the school of “yellow” journalism that has served in the Assange case as a propaganda department for the CIA, but from Émile Zola, the French author who risked everything when he took a stand and wrote “J’accuse…!” in 1898 to rally support for the persecuted military officer Alfred Dreyfus.

This is anathema to the corrupt publishers, editors and senior journalists at publications around the world, who have had a hand in thousands of articles smearing Assange as everything from a “sex criminal,” to a “Russian agent” and even someone who supposedly did not take sufficient care of his cat. Such stories have been a staple of the British Guardian, the New York Times and the Washington Post. Unsurprisingly, none of their leading writers or editors have signed the journalists’ letter.

The relentless character assassination formed an essential part of what Melzer described as an unprecedented “public mobbing,” which has resulted in Assange displaying medically-verifiable symptoms of “psychological torture.”

A number of publications went even further, acting as vehicles for the abrogation of Assange’s rights.

The British Guardian, for instance, which has waged a years-long vendetta against the WikiLeaks founder, published an article in 2018 claiming that Assange had held secret meetings with Paul Manafort, a US political lobbyist and consultant in 2013, 2015 and early 2016.

The story was a lie for which no evidence has ever been produced. It was aimed at tying the WikiLeaks founder to Manafort, who later served as a Trump campaign advisor and was a central target of a US Special Counsel investigation into purported collusion between Trump and the Russian government.

The fabrication nevertheless served its purpose, with WikiLeaks employees and lawyers stating that it played a key role in the chain of events that led the Ecuadorian government to align itself more closely with Washington, unlawfully terminate Assange’s asylum at its London embassy and hand him over to the British police. One of his lawyers stated that the hoax story was then used by the “US authorities to make a formal request to Ecuador to hand over Assange’s belongings from the embassy.”

The Guardian and other media outlets published other slanderous stories, clearly based on surveillance of the embassy. The material was likely leaked from UC Global, a private company tasked with managing the embassy, which was also secretly spying on Assange for the CIA. The publications that ran with such material are, at best, only once removed from illegal spying on a political refugee.

The journalists’ letter and the response to it express a polarisation within the media industry, between principled journalists committed to freedom of the press and others, who function as the stenographers of governments and the corporate elite.

The journalists’ initiative reflects a groundswell of support for Assange among millions of workers, students, young people and professionals. The silence of the media corporations reflects the fear of his persecutors that their attempt to destroy Assange is encountering growing opposition.

The full text of the letter can be read here, along with the current list of signatories.