George Zimmerman, killer of Trayvon Martin in 2012, sues his victim’s family for $100 million

George Zimmerman, the volunteer neighborhood watchman who killed 17-year-old Trayvon Martin in cold blood in February 2012, has filed suit for at least $100 million in damages against the family of his young victim.

Martin was returning from a convenience store in the early evening on February 26 when Zimmerman, a wannabe cop who had joined the community patrol in his gated community in Sanford, Florida, decided that the young African-American man looked “suspicious.” He continued aggressively pursuing Martin, even after a 911 police dispatcher explicitly instructed him not to. After a confrontation with the unarmed teenager, Zimmerman shot him in the heart, killing him instantly. 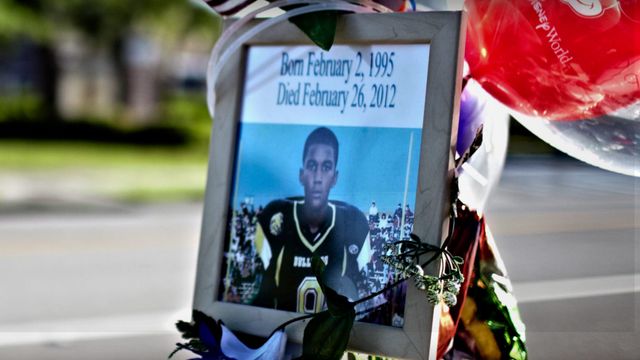 A photo of Trayvon Martin

Zimmerman was at first arrested but was released a few hours later, after he claimed self-defense. He was only charged several months later, after a campaign by Martin’s parents to hold Zimmerman accountable for his reckless and deadly conduct and to denounce the authorities for their refusal to do so.

The trial took place 17 months later. Zimmerman, who had attracted the support of gun advocates and other right-wing backers, did not take the stand, but his lawyers pointed to the notorious “stand-your-ground” law in Florida. This vigilante-type legislation shields those who argue that a fear of harm on their part justifies a violent and often deadly response, even where it can be shown that they could have safely withdrawn from a confrontation.

Zimmerman was acquitted of murder and manslaughter after a relatively listless and ineffective case put on by the prosecution. Now, almost eight years after the death of Martin, he is making the outrageous argument that he “has suffered severe loss of reputation, goodwill and past, present and future loss of income, earnings and other financial damage.” He is claiming damages from Trayvon’s parents, Sybrina Fulton and Tracy Martin, family attorney Benjamin Crump, and also from local prosecutors.

The charge is based on the claim of malicious prosecution and abuse of process, because a young girl who was reportedly Trayvon’s girlfriend at the time was allegedly urged or coached to give testimony implicating Zimmerman as the aggressor in the incident. Crump is accused of defamation because of what he has written about Zimmerman. None of these claims, including the obvious attack on Crump’s free speech rights, are expected to hold up in court.

According to Crump, however, another motive for the lawsuit is to generate support for a forthcoming right-wing documentary portraying Zimmerman as an anti-crime and gun rights crusader.

Crump called the lawsuit “another failed attempt to defend the indefensible and a shameful attempt to profit off the losses and grief of others.” Zimmerman “continues to display a callous disregard for everyone but himself,” he added, “re-victimizing individuals whose lives were shattered by his own misguided actions.”

Another significant element of the lawsuit is the attorney who is acting on Zimmerman’s behalf, Larry Klayman.

Klayman is a 68-year-old veteran of right-wing campaigns. The founder in 1994 of Judicial Watch, which was involved in various charges against Bill and Hillary Clinton in the 1990s, Klayman has more recently been a proponent of the “birther” charge that Barack Obama was a secret Muslim and not an American citizen. Klayman, whose efforts have been backed by the multimillionaire Sarah Scaife and John Olin foundations, among others, has also had connections with Steve Bannon and the far-right Breitbart website.

Zimmerman’s legal maneuvers must be treated with the contempt they deserve. More broadly, the latest development points, more so than ever today, to the meaning of the tragic killing.

Trayvon Martin is one of the most prominent victims of an ongoing right-wing campaign of law-and-order demagogy, including the encouragement of vigilantism and of gun violence. He was of course not the only victim. Laws like Florida’s “stand-your-ground” statute exist in more than half the states of the US. They are designed to divide the working class into the allegedly law-abiding and criminal, to suggest that gun violence will solve the basic problems of life, and to divert attention from the social causes of various ills, including crime.

Zimmerman, clearly disturbed at the time of the killing in 2012, has been embraced by gun fanatics, the promoters of vigilantism and the kind of right-wing campaigns sponsored by his attorney. Since his acquittal in 2013, he has had two other run-ins with the law, both involving charges of domestic violence against girlfriends at the time. The charges, in 2013 and 2015, were dropped after the complainants withdrew them.

As the WSWS explained at the time of Martin’s murder, while racism likely was an element in the targeting of the young man, the fundamental issue is that of class—the oppression of the working class, including all races and ethnicities. The murderous act of vigilantism carried out by Zimmerman, like other manifestations of reactionary backwardness, is encouraged by the capitalist state to divert attention from its own responsibility and to weaken and divide the working class. At the same time the practitioners of identity politics, who continue to portray Martin solely as a victim of racism, use the prism of race to obscure the fact that capitalism is the enemy.

Today, years after this event, Donald Trump, the present occupant of the White House, brazenly promotes the vigilantism, police violence, xenophobia and racism that found expression in Martin’s killing. His Democratic adversaries continue to work to obscure the responsibility of the capitalist system through invocations of race and identity politics. Not a single step forward can be taken against any of these problems apart from the struggle to unite the working class on a program of opposition to this system and all of its political representatives.