The US House of Representatives adopted sanctions by a large majority on Wednesday against firms involved in the Nord Stream 2 gas pipeline. The firms and their managers are threatened with the withdrawal of their visas and the freezing of their wealth in the United States.

Nord Stream 2 connects Russia directly with Germany across the Baltic Sea. From there, the gas is distributed by land to other European countries. The pipeline runs parallel to Nord Stream 1, which has been in operation since 2011, doubling its capacity from 55 billion to 110 billion cubic metres. Germany currently uses almost 90 billion cubic metres of gas per year. 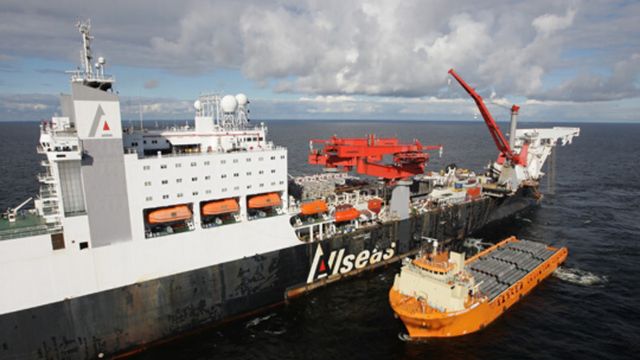 The Solitaire, a ship laying pipe as part of the Nord Stream gas pipeline project in the Gulf of Finland [Photo: http://archive.government.ru]

The Turkish Stream pipeline, which runs from southern Russia across the Black Sea to Turkey, is also impacted by the sanctions. However, the laying of that pipeline, against which the sanctions are directed, has already been completed.

Nord Stream 2 is also largely complete. Over 1,000 of 1,230 kilometres of pipeline have already been laid. Half of the €10 billion cost is being covered by Russia's Gazprom, while the other half is divided among the five European companies, OMV, Wintershall Dea, Engie, Uniper, and Shell. The German government also supports the project.

Both parties in the US Congress backed the sanctions, which were introduced by Republican Senator Ted Cruz and Democratic Senator Jeanne Shaheen. It was adopted by 377 votes to 48 within the framework of the $738 billion military budget, the largest in the country's history. Final passage in the Senate and President Donald Trump's signature are considered formalities. Trump is expected to sign it into law by the end of the year.

Nord Stream 2 has long come under criticism in Eastern Europe and the United States. American politicians have accused Germany of making itself dependent on Moscow, strengthening Russian President Vladimir Putin, and weakening Ukraine, which until now has been the main transit country for Russian gas, allowing it to cash in on high transit charges and use its control of pipelines to apply political pressure. Poland and the Baltic states also oppose Nord Stream 2 because they fear Germany and Russia reaching an accommodation at their expense.

The German side rejects this, claiming that Nord Stream 2 is essential for its own and Europe's energy independence. They also accuse the United States of trying to drive up gas prices so as to be able to supply Europe with expensive American liquified natural gas (LNG). The importance attached to the project by Germany is shown by the fact that former Chancellor Gerhard Schröder has served as a member of the Nord Stream supervisory board for 14 years, formally as a Gazprom representative.

German political and business figures angrily denounced the sanctions and sharply criticised the United States. German Foreign Minister Heiko Maas declared that Europe's energy policy “will be decided in Europe, not in the United States. We are opposed in principle to external interventions and extraterritorial sanctions.”

The head of the German-Russian Chamber of Foreign Trade (AHK), Matthias Schepp, urged the German government to take counter-measures. “It is high time for Berlin and Brussels to take a clear political stand and answer with retaliatory measures,” he said. “Germany needs cheap energy prices to succeed with its energy-intensive industries in global competition.”

Alternative for Germany (AfD) leader Alexander Gauland spoke along similar lines. “Without gas imports from Russia, the risks for German energy security will increase,” he said. Behind the decision to lay sanctions are “vast economic interests in the United States who would love to supply Germany with expensive American liquified natural gas in place of Russian gas.” Washington has “to accept that we decide ourselves where we source our energy fuel, instead of threatening sanctions that will cause everyone to lose.”

The leader of parliamentary business in the Social Democrats' (SPD) parliamentary group, Karsten Schneider, declared, “The US has now finally returned to the wild west, where only the law of the strongest applies. If sanctions are now imposed against allies, we are entering tough times. Europe will not be blackmailed into buying dirty American liquified natural gas.”

The Greens, which oppose Nord Stream due to environmental and foreign policy considerations, joined in the chorus of nationalism. “This is an unprecedented interference in the internal affairs of the European Union. The US President has once again demonstrated how he is replacing political action with blackmail,” stated Green Party co-leader Annalena Baerbock.

The US sanctions against an energy project of a close NATO partner underscore just how conflict-riven the relations between the allies in the world's largest military alliance are. They also show that the mounting tensions in Transatlantic relations do not merely arise from the crude personality of Trump and his America first policies. Trump has in fact adopted a more lenient line on Nord Stream 2 than the hawks in the Democratic Party.

The objective cause of the mounting conflicts is the deepening global crisis of capitalism. The struggles of powerful capitalist interests for markets, raw materials, oil and gas pipelines, trading routes, and cheap labour are reviving the old conflicts between the imperialist powers which twice plunged humanity into world war during the 20th century.

German Chancellor Merkel, Foreign Minister Maas, and other German politicians sharply criticised French President Emmanuel Macron for his declaration that NATO was “brain dead,” and proclaimed their loyalty to the Transatlantic alliance. But this is above all due to the fact that Germany still requires more time to emancipate itself militarily from the United States.

A detailed study by the German Institute for International and Security Affairs (SWP) on the role of NATO for European defence came to the conclusion that a “credible deterrence and military defense of Europe” is currently impossible without the United States' “political, conventional, and nuclear contributions… An independent capability of the Europeans in the defence sector is unachievable without the United States in the short term.”

Therefore, it is “in Germany's interest to secure the political and military functioning of the alliance over the long-term.” Given the shifts in American policy, “the European allies must however, consider a future form of NATO and European defence which involves the United States to a lesser degree.”

In other words, the Germans and other European powers must first rearm before they can break with the United States.

The US sanctions on Nord Stream 2 will accelerate the German government's rearmament drive, which already aims at doubling annual military spending over the coming ten years to €90 billion. As the reactions to the US sanctions show, the ruling class can rely on the support in this of all parliamentary parties, from the AfD to the Left Party.