Build independent committees of action to bring down the Macron government in France!

It is nearly two weeks since mass strike action by rail workers, teachers, energy and port workers began against French President Emmanuel Macron and his pension cuts. Today, hundreds of thousands of strikers and students will again march in mass protests across France.

The eruption of class struggle in the heart of Europe has drawn the basic class lines in society and demonstrated the power and revolutionary potential of the international working class. Mass transit has been shut for two weeks, many schools are closed, and strikes by truckers and refinery workers raise the specter of fuel shortages and a total transport shutdown. 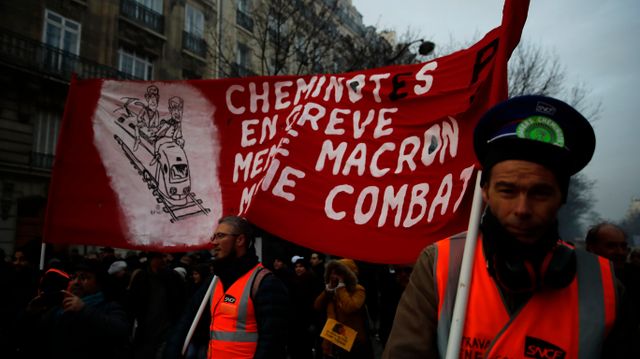 Above all, the strike is an integral part of an expanding global resurgence of class struggle, with mass protests in Algeria, Iraq, Bolivia, Chile, and strikes by US and Mexican autoworkers. It has led to an outpouring of pent-up opposition to social inequality, the financial elite, and the capitalist system.

It has not taken long for political issues facing the workers in France and beyond to emerge. Macron sent armored cars, water cannon and riot police to attack strikers on the first march on December 5. Then Prime Minister Edouard Philippe spoke last week, signaling that no concessions would be made. Despite the opposition of 70 percent of the public, he pledged to ram through parliament Macron’s plan to introduce a system of pensions “by points,” raise the retirement age two years to 64, and phase out public sector pension plans.

This struggle against an authoritarian regime trampling democratic principles underfoot presents pressing tasks to the working class: building independent workers committees of action to organize a political struggle to bring down Macron; and building a new socialist leadership.

Workers cannot limit themselves to echoing the Stalinist General Confederation of Labor’s (CGT) useless appeals to Macron to withdraw his pension cuts. While strikers call for the strike to be extended past Christmas, CGT leader Philippe Martinez is trying to wear them down, calling for large rallies while asking Macron to reconsider and withdraw his pension cuts—pledging that the CGT could then end the strike before Christmas. For workers, this road leads to a sell-out and defeat.

Last week’s revelations have made crystal clear the class character of Macron’s policies. As his government worked out his economic policy, shortly after his election in 2017, he met with the $6 trillion BlackRock international financial asset management firm. His point man to design the pension cuts, Jean-Paul Delevoye, resigned yesterday after it emerged that he illegally raked in six-digit fees at various foundations—including some funded by insurance firms with a direct interest in scrapping state pensions and introducing investment pension accounts.

As for Macron’s plan to give workers pensions counted in “points” of indeterminate monetary value, its purpose was laid out succinctly in a video of a 2016 speech by former right-wing Prime Minister François Fillon. The pension by “points” system, Fillon said, “allows for one thing that no politician is admitting. It allows for reducing each year the size, the value of the points and thus to diminish the level of pensions.”

There is nothing to negotiate with such a corrupt and reactionary regime. The CGT’s policy of appealing to Macron is bankrupt, and part of the union bureaucracy’s close collaboration with successive French governments to approve decades of pension cuts, labor market deregulation and other austerity measures. The entire French pseudo-left, from the NPA to Lutte Ouvriere to Jean-Luc Mélenchon’s La France Insoumise, have supported the unions in claiming Macron might be pressured to withdraw the pension cuts.

The defense of workers’ living standards and democratic rights requires a struggle to bring down Macron, crush the economic and political power of the international financial aristocracy, and replace capitalism with a socialist society.

In today’s globalized capitalism, workers will find no way forward but the revolutionary road. The conflicts erupting in France and internationally are the product of global social contradictions that matured over decades. The era since the 1991 Stalinist dissolution of the Soviet Union, and since the 2008 crash especially, has seen a relentless transfer of wealth produced by workers into the pockets of the super-rich, and into imperialist wars from Afghanistan, to Syria and Mali.

A half century ago, the Stalinist French Communist Party sold out the revolutionary opportunity in the May 1968 general strike in exchange for wage rises in the Grenelle Accords. European capitalism today, devastated by decades of deindustrialization and tax handouts to the super rich, no longer offers such concessions. Macron has kept funneling hundreds of billions of euros to the army and the billionaires—even after he became so deeply hated that last year, a helicopter had to be put on 24-hour call to rescue him, in case he ever fell into the hands of “yellow vest” protesters.

Already, the “yellow vest” protests over the last year have shown the potential for social protests organized independently of the union bureaucracy. As the working class moves into struggle, the key issue is how to organize the fight independently of the union bureaucracy and oppose its attempts to tie the insurgent movement of the workers to Macron.

The struggle to build committees of action, independent of the trade unions, is now critical. A year before the eruption of the 1936 French general strike, Leon Trotsky wrote in Whither France that such committees were the “only means of breaking the antirevolutionary opposition of the trade union and party apparatus.” Comparing them to soviets formed by Russian workers in 1917, which took power in the Bolshevik Revolution, he wrote:

Committees of Action at their present stage have as their task to unite in a defensive struggle the toiling masses of France and thus imbue these masses with the consciousness of their own power for the coming offensive. Whether matters will reach genuine soviets depends on whether the present critical situation in France will unfold to the ultimate revolutionary conclusions.

The Parti de l'égalité socialiste (Socialist Equality Party, PES), the French section of the International Committee of the Fourth International, urges broad discussion of this perspective among workers in France and internationally. The developing confrontation between the Macron government and the working class, amid a global resurgence of class struggle, is a sign that a revolutionary struggle for socialism is again on the political agenda. This requires breaking the counterrevolutionary resistance of the unions and their defenders in parties like the New Anticapitalist Party and Unsubmissive France.

In every country, the bourgeoisie is closely watching Macron’s efforts to impose a social counterrevolution in the face of explosive mass opposition. There is no national road to solve the problems facing workers in France. In this struggle, the best allies of workers in France are their class brothers and sisters across Europe and internationally. Against the war plots of the NATO alliance and the maneuvers of the international financial markets, the decisive question is forging the international unity of the working class in struggle.

The PES advocates the building of committees of action through which the working class can organize its economic and industrial power, link up its struggles internationally, and lay the basis for a revolutionary reorganization of society. Within this, the PES advances a political strategy of transferring state power to the independent organizations of the working class, expropriating the financial aristocracy, and reorganizing economic life on the basis of social need, not private profit.