Throughout the afternoon yesterday, the corrupt bosses of France’s trade union federations trooped in one by one to meet Prime Minister Édouard Philippe in the gilded rooms of Matignon Palace, the prime minister’s official residence. 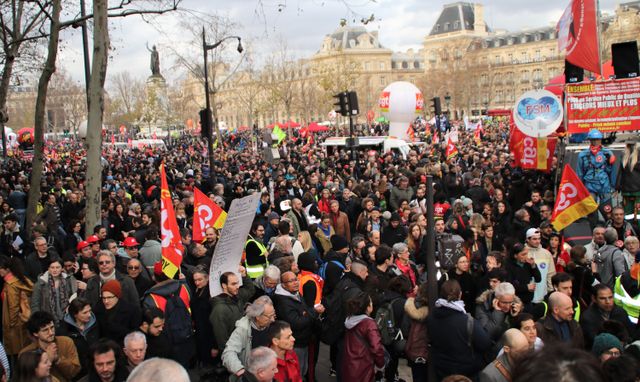 Tens of thousands gather on the Place de la Republique

As a mass rail, transport, education and energy strike enters its third week, workers are calling to end talks with Philippe, who has stated that he will ram his cuts through parliament in February despite mass opposition. Union leaders’ meetings at Matignon, smiling and joking with Philippe for the TV cameras, highlights the class gulf separating them from millions of workers and youth now taking to the streets. While workers fight to defend pensions, the unions are trying to find ways to justify a sell-out and lull workers to sleep on growing dangers of state repression.

Nonetheless, the union bosses went to Matignon and, after meeting Philippe, spoke to the media to promote their attempts to cut deals with the government, while staying silent on military plans being hatched inside the state machine.

“An opening for discussion may be opening to flesh out an alternative solution, I hope this will take place and that Édouard Philippe will confirm it tomorrow,” said Laurent Escure, the head of the National Union of Autonomous Unions (UNSA), who met Philippe first. Philippe is due to make an announcement this afternoon on pension cuts, after a collective meeting with all the union bosses.

Philippe Martinez, the boss of the Stalinist General Confederation of Labor (CGT) union, struck the most somber tone, stressing his fear of workers’ growing militancy. “The longer this strike drags on, the more social anger turns into something else,” he said. Martinez claimed he had warned Philippe that “the tougher the strike gets, the harder it will be for you to convince anyone” to cut a deal on pensions. 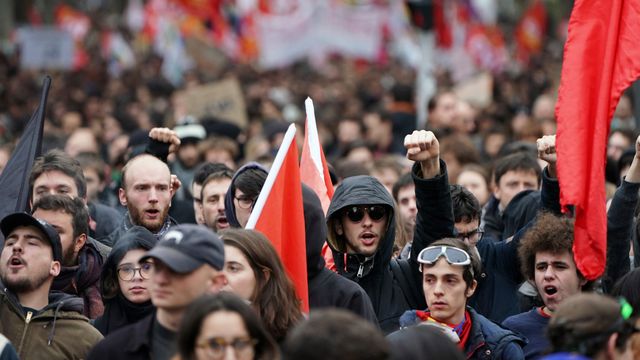 Protesters at a demonstration in Lyon [Credit: AP Photo/Laurent Cipriani]

Laurent Berger of the pro-government French Democratic Labor Confederation (CFDT) met Philippe last. After his meeting with Philippe, he declared: “Today there was a first discussion where we noted our disagreements without finding solutions, for the time being. But we could feel, I must say, a real eagerness for discussion and exchange.”

From the standpoint of the interests of the working class, there is nothing to negotiate with Philippe. The government has made clear it will not modify any of the essential elements of its pension cuts; instead, though 70 percent of the French population opposes the reform, the government will impose it and send riot police to attack protests against its policy. The way forward for workers is to draw broader layers of the working class, in France and internationally, into the class struggle, and fight to bring down Macron.

The class interests underlying the union bureaucrats’ negotiations with Philippe have an entirely different character. While they claim to lead “unions,” these affluent members of the upper middle class do not represent workers. An official 2012 report on union financing, which the unions did not try to refute, found that due to the decades-long hemorrhaging of members after betraying countless strikes, these bloated bureaucracies rely on subsidies from the state and business for over 90 percent of their €4 billion yearly budget.

The unions are determined to “negotiate” with Philippe not because they are trying to change his government’s policy. Instead, desperate to maintain the state and corporate financing that is the lifeblood of their organizations, these corrupt bureaucrats are working with Philippe to concoct a fraudulent compromise they can use to force workers to return to work and accept Macron’s cuts.

The main measures in these cuts are a two-year increase in the retirement age to 64, the elimination of public-sector retirement plans, and going over to a system where workers receive “points” from their pension plans. The monetary value of these “points” is not fixed, and the state can modify them at will over time. As former Prime Minister François Fillon said in 2016, such a system “allows for one thing that no politician is admitting. It allows for reducing each year the size, the value of the points and thus to diminish the level of pensions.”

Yesterday, the Élysée presidential palace released a brief statement that Macron is willing to “improve” his pension cuts to secure “the objective of ending the movement” before the holidays. There is press speculation that the CFDT would call an end to the strike if Macron abandoned or perhaps slowed the implementation of the increase in the pension age.

A political confrontation has emerged between Macron, backed by the European Union and the international financial aristocracy, and the working class. There is a growing sense among strikers, “yellow vest” protesters and youth that they cannot organize a continuing struggle under the straitjacket of the unions. It is critical for workers to take the struggle out of the hands of the unions, and build their own independent committees of action to prevent a sell-out, fight to bring down Macron, and prepare the transfer of power to organizations of the working class.

After nearly two million workers, students, youth and retirees marched against Macron on Tuesday, strikes and protests took place on Wednesday and will continue in the next days. Popular support for the strike remains high. According to an RTL poll, 62 percent of respondents said they supported the strike.

In Paris, only half of the 16 metro lines were operating on Wednesday, with most of the active lines providing only very limited services. Only the automated lines 1 and 14 were running as normal. Most trains also remain strikebound. According to the National Railways (SNCF) only one out of five TGV and one out of six Intercity trains were operating.

In Paris, where the largest demonstration with over 300,000 protesters took place on Tuesday, students and pupils continue to support strikers. High school students blockaded schools across Paris yesterday. In the 10th arrondissement of Paris, one hundred students of Colbert High School erected makeshift barricades in Château-Landon street. “We are also on strike,” the students shouted as they were confronted by police.

As strikes and protests become more militant, businesses are increasingly feeling the impact. Industry associations report turnover losses of 30 to 60 percent compared to the year before. According to the General Confederation of Small and Medium Companies (CPME), the strike is costing the economy about 400 million euros a day.

Amid the massive popular support for the strike and the unions’ inability to quickly end it, growing sections of the ruling elite and of the military are calling for increasing repression. General Pierre de Villiers told RTL radio on Monday: “We must restore order, we cannot continue like this.” He demanded that the government “strike a balance between humanity and firmness” in dealing with strikers. He also lamented the “deep wedge” between the political establishment and the population.

Strikers opposing Macron cannot leave the task of mobilizing the working class against the danger of state repression to France’s bought-and-paid-for unions. The unions did not oppose the 2015–2017 French state of emergency that prepared the brutal crackdowns on social protests in recent years, and which Stalinist and pseudo-left deputies voted to support in the National Assembly. Moreover, they denounced the “yellow vest” protests last year, even as brutal police attacks on the protests led to over 10,000 arrests and left thousands of protesters wounded.