Hearings over a US extradition request for WikiLeaks founder Julian Assange will likely be held across “three or four weeks,” starting in February, District Court Judge Vanessa Baraitser told Westminster Magistrates Court yesterday. Baraitser departed from her previous insistence that a hearing scheduled to begin on February 24 would run for just five days—a logistical impossibility considering the scale and complexity of the case.

Assange appeared at yesterday’s case management hearing via videolink from Belmarsh maximum security prison. He is being held there on remand, based solely on a US extradition request over WikiLeaks publications that exposed US war crimes in Iraq and Afghanistan.

Some of the protesters outside Westminster Magistrates Court

Wearing a pale blue jumper, Assange appeared aged and unwell. After confirming his name and date of birth, he viewed the court’s proceedings, leaning forward and squinting at times, via a livestream.

Ed Fitzgerald QC of Doughty Street Chambers appeared for Assange, telling the court that a “summary of issues” for the defence case was served to the court on December 17, with evidence bundles served on December 18.

“We have experienced great problems in getting to see Mr Assange to get his input on these important issues,” Fitzgerald told the court.

Extraordinarily, Assange only viewed the full defence case this week. This followed an intervention last Friday by Assange’s solicitor Gareth Peirce, who told a remand hearing she had been obstructed from briefing her client about vital new evidence.

Fitzgerald listed several bundles of evidence submitted to the court. These covered the Espionage Act charges by the US government, evidence relating to Chelsea Manning, medical evidence, public statements by US politicians denouncing Assange and WikiLeaks and evidence relating to abuse of due process and prison conditions.

Crucially, one of the bundles relates to evidence that the Spanish security firm UC Global illegally spied on and recorded privileged discussions between Assange and his lawyers at the Ecuadorian embassy on behalf of the CIA. Phones, laptops, legal documents and ID belonging to lawyers and journalists were illegally accessed.

Assange will give evidence today via videolink to Spanish High Court Judge José de la Mata over the spying activities of UC Global from 2017 up until Assange’s illegal expulsion from Ecuador’s London embassy on April 11. With further evidence likely to emerge from current proceedings in Spain, the deadline for final submission of defence evidence was extended to January 10.

“Given the gravity of the issues” and their legal scope, Fitzgerald explained, Assange would be represented at next year’s hearing by three QCs. Fitzgerald said the defence would present 21 witnesses, 16 of whom would testify in court.

Fitzgerald alluded to previous requests that the court hear preliminary arguments from the defence over the US extradition request’s non-compliance with current US-UK treaty arrangements. “We say there is a ban on being extradited for political offences and that these charges are as framed and in substance political offences,” he said.

Lawyers for the prosecution showed signs they were rattled by yesterday’s hearing. Having argued for months that Assange’s legal team must bend to meet impossible deadlines, Clair Dobbin for the US government told Judge Baraitser the prosecution needed more time, because “a vast amount of evidence has been served.”

She told Baraitser that lead prosecutor James Lewis QC was unavailable for the second week of the hearing and suggested a part-adjournment to April. This was rejected by Baraitser who replied, “My impression was the government was anxious for this case to remain on track and not be derailed.”

After adjournment to allow Dobbin to contact James Lewis QC, she returned empty-handed, telling Baraitser she had been unable to reach him. His clerk had confirmed he had an “important case” which could not be changed.

At yesterday’s hearing, German Left Party MP Sevim Dagdelen was present as an observer along with the German ambassador to the UK, Dr Peter Ammon. But a delegation of medical observers from Doctors4Assange was blocked from entering the public gallery. Court officials refused them access, despite members of the public volunteering to give up their seats.

The advocacy group Bridges for Media Freedom has announced that 25 MPs from across Europe will attend next year’s extradition hearing at Belmarsh Magistrates Court as official observers. The European Parliament, the Bundestag and the Italian Senate all held events this past month to discuss the extradition moves against Assange, and MPs from Germany, Italy and the European Parliament will travel to London in February.

Their actions are in stark contrast to the UK Conservative government, which has ruthlessly hounded Assange, along with swathes of Labour MPs who lent their support to the state witch-hunt, reflecting the geostrategic alignment of British imperialism with the United States.

While even right-wing MPs across Europe are speaking out, Labour leader Jeremy Corbyn and Shadow Home Secretary Diane Abbott have maintained their silence. After claiming in April to oppose Assange’s extradition to the US, the pair fell into line after they were challenged by an alliance of Blairites and Tories demanding that Assange be sent to Sweden to face a then non-existent (and now dropped) preliminary investigation into bogus sexual allegations concocted by the Swedish state.

In Europe, where trade and military tensions with the US are growing, sections of the political establishment, from the Left Party in Germany to the Five Star Movement in Italy, have been willing to condemn US human rights violations while extolling “the foundations of European democracies.”

The relentless state persecution of Assange and the use of the Espionage Act to target WikiLeaks for exposing war crimes, express a turn to authoritarian forms of rule, not just in the US and UK, but in every country. In France, the Macron government deploys tanks and military police against striking workers and organises the mass round-up of political opponents. In Germany, the ruling class has promoted the far-right Alternative for Germany (AfD) as the main opposition party as it seeks to criminalise the left and build up the state against opposition from below.

The defence of Assange is inseparable from the struggle against austerity, war, the rise of the far right and moves towards dictatorial forms of rule. His freedom can only be won through the mobilisation of a mass political movement of the working class against capitalism and in the fight for socialism. 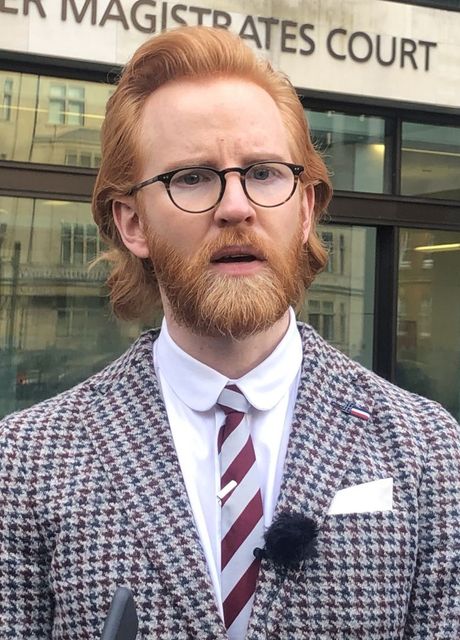 Speaking after the hearing, WikiLeaks Ambassador Joseph Farrell told the WSWS, “It was very interesting the way that previously the magistrate had been very clear that this case was going to be a five-day hearing with perhaps a bit of spillover ... It was very encouraging to see that the magistrate changed completely today and was talking about a four-week hearing.

“The access to Julian from the legal team has still been very, very poor. The legal team put in a request for the magistrate to make an application, which she wouldn’t do. She said that she would expect the prison to make Julian available to the legal team. But it’s the time of year at the prison when everything is locked down for Christmas, and family days and visits are limited and get cancelled regularly.

“One would expect Julian’s lawyer, Gareth Peirce, to be able to see him many more times than she has. There was a long period when she couldn’t see him. The legal team took months and months to get the prison to give him a computer that he could review the evidence against him on. He got a computer, but it wasn’t fit for purpose.”

Farrell explained that there was a groundswell of support for Assange . “There’s been a torrent of open letters by the medical doctors. Australian lawyers sent a very, very good letter to [Australian Prime Minister] Scott Morrison. Also an open letter of hundreds of journalists that’s been growing ever since. There is a lot of support for Julian and that’s because everyone understands the implications of this case. It’s a press freedom issue. To extradite him would mean that anyone could be extradited for anything that they write about any government that finds it unsavoury.”