This was the second Queen’s Speech in two months and follows last week’s general election, which the Tories won by a landslide—finishing with a majority of 80 MPs—due to a collapse in Labour’s vote. 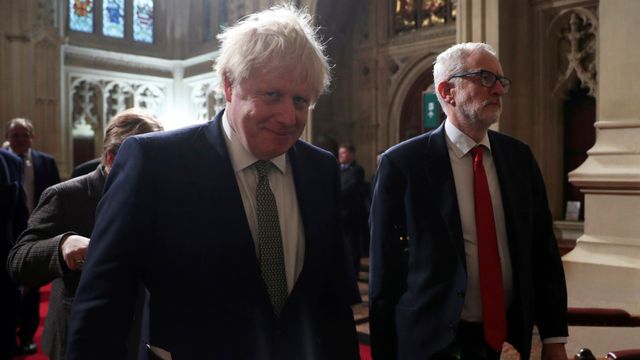 The Speech laid out more than 30 bills, of which seven were directly to do with Brexit. Today, the Tories will pass the second reading in Parliament of the Withdrawal Bill Johnson agreed with the European Union in October. It will enshrine in law that the UK will leave the EU on January 31 and that there will be no extension beyond the end of December 2020 for the UK to complete a trade deal with the EU. If a deal is not reached, then the UK will leave without one.

The Queen’s Speech confirms that the mantra of “Getting Brexit Done” is intimately bound up with escalating the offensive against the working class. The speech includes, for the first time ever in the UK, legislation that effectively bans strike action.

Curtailing the right to strike has long been an aim of the Tories and their supporters in the right-wing media, since the Thatcher and Major governments first pushed through a raft of anti-strike laws during their 1979-97 period in office.

Beginning with transport, strikes will only be allowed if a “Minimum Service Agreement” is struck beforehand. If not, then strikes can be banned outright.

Transport Secretary Grant Shapps announced the Tory’s intention to bring in the anti-democratic legislation in November, as South West Rail conductors were set to begin a 27-day strike to fight the imposition of Driver Only Operation (DOO) rail services. Conductors at West Midlands Trains were also striking on successive Saturdays, before their action was suspended by the Rail, Maritime and Transport (RMT) union who are recommending workers accept a form of DOO agreed to in talks with management.

A November ConservativeHome article revealed that a Conservative majority government would “legislate to require rail employers and unions to enter into Minimum Service Agreement. MSAs would set in advance the number and nature of staff who would remain at work during any strike.”

The minimum service level would vary “between a fifth and a third of normal service,” meaning “that there would never be a situation where there are no trains running, even during industrial action.”

ConservativeHome stressed that “In the absence of an MSA, strike action would not be lawful.”

This would automatically make illegal all unofficial action not sanctioned by the trade unions. The legislation is being imposed due to the ruling elite’s fear of an escalation in the class struggle, which has already seen growing numbers of workers fighting in defence of their jobs, wages and conditions. During the election campaign, the High Court intervened twice to rule illegal a strike ballot by 110,000 postal workers, as 40,0000 higher education workers struck to defend their pay, conditions and pensions.

ConservativeHome complained, “For too long, militant rail unions have caused misery for passengers up and down the country. Since 2016, more than 160 days of strikes have taken place, or are planned, hitting 11 out of the country’s 17 rail franchises, plus London’s Underground. One of the country’s busiest commuter networks, South Western Railway, will strike for almost the entire month of December.”

As the plans were announced yesterday, Shapps gloated, “The ability of a few people to prevent everyone from being able to earn a living has to come to an end.” The Sun, owned by billionaire oligarch Rupert Murdoch, who organised a strike busting operation at his newspapers in the 1980s, hailed the “bold new laws to ban train strikes, toughen up jail sentences…”

These laws are only the precursor to banning strikes outright across the economy. Initially, they will cover all transport workers, including rail, bus, metro and those on London’s Underground. There are around 1.5 million transport workers in the UK’s 32 million strong workforce. But there is literally no section of workers that cannot be bracketed as essential under such laws—including health workers, education employees, refuse workers, retail workers, delivery staff, etc.

In Spain, similar measures were used against air traffic controllers in December 2010. They were marched at gunpoint from a hotel where they were meeting, placed under military control, and forced to work under police guard.

In Sri Lanka, the government smashed a rail strike in the summer after invoking a draconian “essential services” order.

In addition, the Queen’s Speech announced measures “to encourage flexible working.” The Tories pledged to increase wages for workers to a still low rate of £10.50 an hour by the end of their first term in office, but a Queen’s Speech briefing paper states that this minimal increase is now conditional, “provided economic conditions allow.”

This is part of government’s aim at the creation of a “Singapore on Thames”, based on a vast pool of flexible labour, employed in a deregulated economy that will be made available for super-exploitation by global corporations.

A further indication of the intention of the Tories’ intention to tear up workers living standards is the removal from the EU Withdrawal Bill of clauses that were agreed by Johnson’s predecessor, Theresa May, to ensure that the UK kept parity with workers’ rights legislation in the EU.

The Sun also backed Johnson’s plan for “toughening up our borders”, with the Speech announcing an Australian-style points immigration system.

Utilising the terror attack that took place at Fishmonger Hall in London during the election campaign, in which two university graduates lost their lives, the government will bring in new sentencing laws to “ensure that the most serious violent offenders, including terrorists, serve longer in custody.” Those convicted face a minimum of at least 14 years in jail.

Public bodies and their employees will be required by law to deepen their already broad collaboration with the police and intelligence services, with the queen announcing “New laws [that] will require schools, police, council and health authorities to work together to prevent serious crime.”

The Tories also pledged another 20,000 police on the streets.

The government already has plans in place to deploy “significant amounts of police resources” to deal with protests post-Brexit. Its Operation Yellowhammer includes plans to make ready 50,000 regular and reserve troops “in case of civil unrest, to assist at Britain’s airports and to ensure fuel and medical supplies.” They will be backed up by 10,000 riot police, ready to be deployed in 24 hours, and 1,000 extra police from Britain sent to reinforce the Police Service of Northern Ireland.

Another reactionary measure are proposals to end “vexatious claims that undermine our armed forces”. This is in response to the legal action taken to expose thousands of war crimes committed by British troops during the illegal invasions and occupation of Iraq and Afghanistan.

According to NHS Providers chief executive Chris Hopson, the Tories would in reality need to double their National Health Service spending pledge to account for a “lost decade” due to underfunding, during which it increased by only 2 percent a year. The Tories now propose to increase NHS spending by just 3.4 percent annually, but increases of 3.5 percent are required just to keep up with demand and increases of 4 to 4.5 percent are needed to bring down waiting lists standing at record levels.