Retired four-star General Fulgencio Coll Bucher, Chief of Staff of the Spanish Army between 2008 and 2012 and spokesperson for the fascistic Vox party in Palma de Mallorca, has called for the army to oust acting Prime Minister Pedro Sánchez. According to El País, Coll’s article is circulating widely in the officer corps via WhatsApp groups.

Coll laid out some of his arguments in an article titled “Pedro Sánchez, a problem for national security” in the regional Balearic edition of the right-wing daily El Mundo.In it, Coll calls on unidentified "powers of the state”—apparently the army—to “prevent” Sánchez assembling a majority for his government if it includes the separatist Catalan Republican Left (ERC). He says Sánchez “should not be allowed to endanger with impunity the institutional legitimacy of the state.” 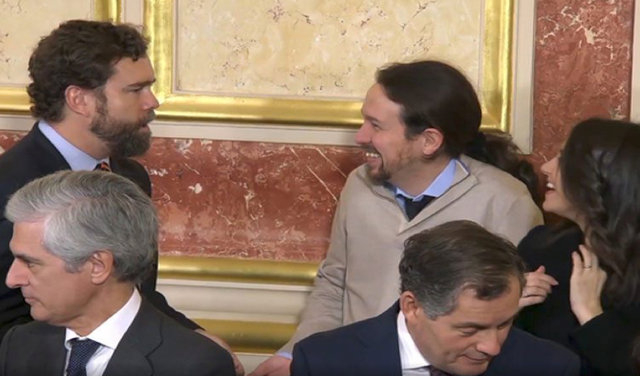 Referring to the PSOE-ERC talks, Coll said that "the acting prime minister’s behavior is not legitimate, nor can one accept it in a prime minister… Pedro Sánchez seeks personal satisfaction without noticing the obvious institutional damage, as he will negotiate a reform of the state of unknown content and scope with a minority to break the constitutional order.”

Coll also accuses the PSOE of being insufficiently aggressive in repressing mass protests against this year’s show trial of Catalan nationalist politicians. The repression left over 600 protesters injured and hundreds arrested. Yet Coll accuses Sánchez of treason for “confusing an organised insurgency with a problem of public order,” “endangering the members of state security so as to avoid political risk,” and “treating the defence of the Constitution as optional.”

Coll states that Article 102 of the Constitution allows, at the initiative of a quarter of parliamentarians and by an absolute majority in parliament, charging Sánchez before the Supreme Court “with treason or any other crime against state security.”

Vox leader Santiago Abascal has defended Coll’s article, denouncing Sanchez as “the traitor who inhabits the Moncloa” prime ministerial palace. On Twitter, he wrote: “They are really worried that Spain will defend itself against the imposition of a progressive dictatorship. They do well to worry, because Spain will defend itself.”

Coll’s statement is a threat to workers not only in Spain, but across Europe and beyond. Sections of the UK military and intelligence establishment have denounced Labour leader Jeremy Corbyn as unfit to rule. In France, the newly retired head of the general staff, General Pierre de Villiers, has demanded harsher repression of a nationwide strike, stating: “There is not enough firmness in our country.” Amid growing strikes and protests across Europe and internationally, factions of the ruling class are discussing the possibility of launching coups and imposing military dictatorships.

After leading four coups in the 20th century—in 1923, 1932, 1936, and 1981, with the 1936 coup leading to a three-year Civil War and a 39-year fascist dictatorship under Francisco Franco—the Spanish army is again considering intervening in political life. Under cover of threatening mass protests against the Spanish crackdown in Catalonia, it is building up a police-state machine targeting the working class.

So far, the PSOE and Podemos have reacted to Coll’s threat with deafening silence. They left it to a low-ranking official, PSOE spokesperson for the Balearic Islands Iago Negueruela, to reply. He called Coll’s article “a very dangerous approach, especially coming from someone who was what he was... These are antidemocratic statements that are outside of the Constitution.” He added, “Vox is a party that is a danger to coexistence and democracy.”

Both the PSOE and Podemos have participated in the anti-Catalan campaign, calling on the Spanish population to accept the reactionary sentencing of nine Catalan politicians to lengthy prison terms for organising peaceful protests and an independence referendum. In government, they continued the austerity, militarist and anti-migrant policies of the right-wing Popular Party government. This has only fuelled Vox’s rise.

Political opposition to the danger of coups and military dictatorship in Spain can only be organised independently of and in opposition to Podemos. Totally integrated into the state machine, this party itself incorporates substantial sections of the Spanish army and police apparatus. Whatever its tactical differences with Vox, it is united with Vox in its defence of Spanish patriotism, the cult of nationalism, and its opposition to an independent political movement in the working class.

After thousands of Twitter users criticized Iglesias’s actions, he replied that it simply reflected the “human condition.” His claim that it is only “human” to sympathize with far-right politicians again underscores that his brand of postmodernist, “left-populist” politics, and the broader affluent middle-class milieu from which it emerges, have nothing to do with left-wing politics.

Iglesias’s dismissal of the issue notwithstanding, the far right is growing rapidly in Spain. The support of the PSOE and Podemos for austerity, militarism, military spending increases, and repression in Catalonia has provided the political atmosphere for the growth of Vox. It entered parliament this year, the first time a far-right party entered the Spanish parliament since the end of fascist rule in Spain, in 1978.

In June, the Supreme Court issued a ruling endorsing Franco’s 1936 fascist coup, describing Franco as “head of state from 1 October 1936 until his death in November 1975.” With this unprecedented ruling, Spain’s highest court claimed that the proclamation of Franco as head of state in a coup led by a gang of fascist generals on October 1, 1936 was legitimate.

Now top-ranking officers are coming out in favour of fascistic positions. Coll held the Spanish Army’s top post until seven years ago, having been named by former PSOE Prime Minister José Luis Rodríguez Zapatero, who also tasked him with leading disaster relief in Spain and overseeing the withdrawal of Spanish troops from Iraq. Other retired officers in Vox include former Navy General Agustín Rosety Fernández de Castro, former General of Division Alberto Asarta, and former General of the Air Force Manuel Mestre. All three sit in the Congress.

Both Rosety and Asarta signed last year’s pro-fascist manifesto “Declaration of Respect to General Francisco Franco Bahamonde, Soldier of Spain,” along with 670 other top current and retired officers. It hailed Franco’s “unique command of Spain, assaulted and besieged by international communism.”

This is an open statement of support for Franco’s fascist mass murder. His 1936 coup targeting growing radicalization in the working class under the Spanish Second Republic triggered the Spanish Civil War, which led to over a quarter million deaths and the imposition of a dictatorship that ruled Spain until 1978. Franco interned hundreds of thousands in concentration camps, banned strikes and political parties, censored the press and had thousands tortured by the secret police.

Coll’s statement underscores that the official legitimization of Francoism is not a purely historical issue but reflects the European ruling elite’s rapid move towards police-state rule.