“They treat us like cavemen. They don’t care if we live or die.”

Sunday marked the eleventh week of the strike by nearly 2,000 copper miners against Asarco LLC, owned by the Mexico City-based Grupo México, the third largest copper producer in the world. The strike, which began October 13, has largely shut down production at three open pit mines and a smelter in Arizona, as well as a refinery in Amarillo, Texas. Asarco has brought in scabs to resume production at the three mines, while the smelter and refinery remain closed. 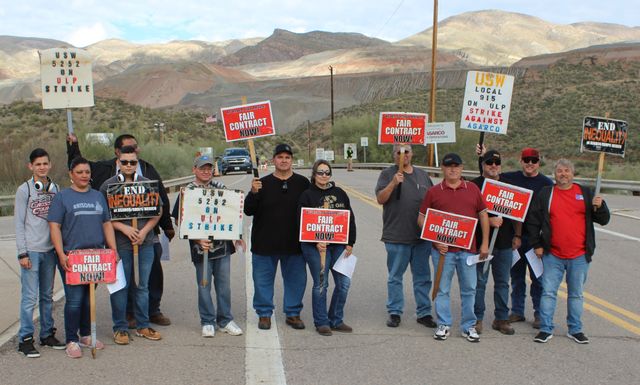 Striking Asarco copper miners at the entrance to the Ray mine

Negotiations over a new contract have been stalled since November 2018, when the previous 14-month contract expired. In early October, Asarco revealed its “last and final offer,” which amounted to an ultimatum that miners accept a future of poverty, poor health and unsafe working conditions. The company is demanding that workers extend their decade-long pay freeze for four more years and accept a more than doubling of their health care contributions and a freeze on their pension benefits.

In the face of this assault by the corporation, a coalition of nine unions, led by the United Steelworkers (USW) and the Teamsters, has limited the strike to allegations of “unfair labor practices.” Instead of striking over Asarco’s demands for sweeping concessions, the unions are simply demanding that the company negotiate in good faith under the auspices of the National Labor Relations Board (NLRB).

This strategy is aimed at hamstringing the striking miners and preventing them from broadening their struggle to the entire copper industry. The unions have imposed a gag order on the workers, demanding that they not discuss the economic issues that motivated the strike. The unions can call off the strike at any time by claiming that Asarco is negotiating fairly, sending the miners back to work with none of the economic issues resolved. Meanwhile, the company has the ability to fire the striking workers and replace them permanently.

A World Socialist Web Site reporting team spoke with striking miners last week at the massive Ray 1 open pit mine outside Kearny, Arizona, discussing their working conditions and their thoughts on the struggle. The mine, which opened in 1880, extends for miles in each direction and contains one of the largest copper reserves in the US.

Tanis, a miner with 38 years at Asarco, said: “We are fighting for the next generation. They’re trying to take away our wages, health benefits and pensions. Asarco started Grupo México. After they came in and took over, they haven’t given us raises. They don’t help the communities, all the money is just for themselves. They want to freeze our pensions and not pay us anything more for additional time that we work. They want to keep us on a 10–12 hour workday, when we were on eight-hour shifts just a couple years ago.” 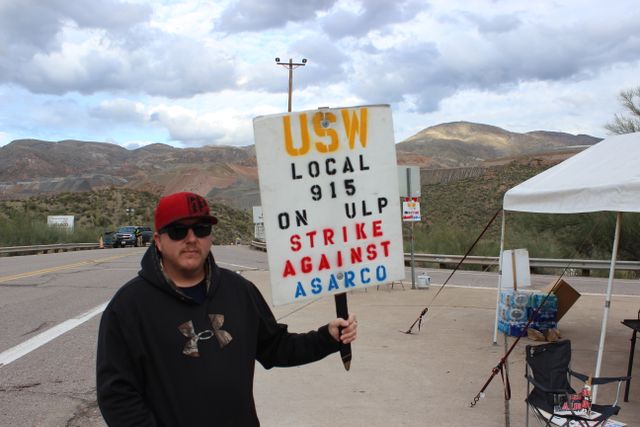 Cody, a shovel and drill mechanic with 12 years

Cody, a shovel and drill mechanic with 12 years at Asarco, spoke on the reactionary demands the company is making. He said: “They’re trying to give us a minimal raise and raise our insurance costs, which would technically be a pay cut for us. We’re trying to get better wages and insurance, and we’re also fighting for the people that are already retired, because they’re trying to take away their pensions.

“The company is trying to break us so they can do whatever they want. They’re trying to make it so it’s not livable. They’re going backwards, no forward progress. We’ve gotta stay strong with everybody else and show them that we mean business.”

Cody also noted the extreme heat that the workers face when working in the summer. “In the summer time it gets real hot,” he said. “It gets to 130 degrees down in the bottom of the pit.”

In addition to the heat, workers face other serious workplace safety issues as well as environmental contamination in the nearby communities where they live. Lead and arsenic levels in the air above the region’s copper mines have been found to be 60 to 80 times above “safe” levels, due to environmental damage caused by Asarco over decades. 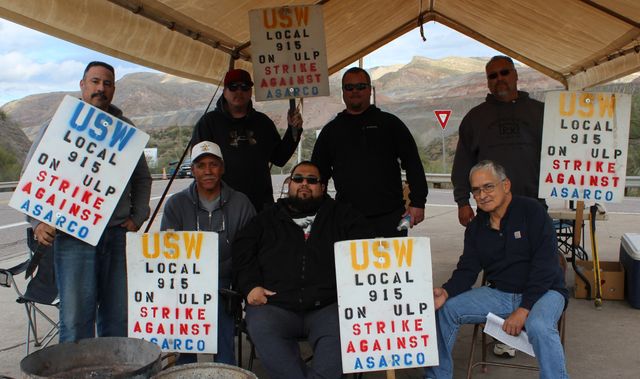 Dino, a miner with 18 years at the company, commented: “A lot of guys I know who retired died right after with cancer. I was diagnosed with cancer, and no one from the company came to ask me how I was doing. Inside there, we face chemicals, dust and stress. I’m trying to retire in a couple years so I don’t die like the others that I know. They want to take away our pensions, but no one can survive on $1,000 a month.”

A veteran worker described the unsafe conditions: “We breathe in dust all day. There have been a handful of deaths at this location. When we sit in the seat of the hauling trucks, you can’t see 36 feet in front of you. You can’t see 92 feet to the right of you, 35 feet to the left. If someone is out there, out of your line of sight, you can crush them. On top of that, the contractors who drive out here don’t go by the rules. They try to beat us across the intersection, and they could easily get flattened.”

Another worker said, “They treat us like cavemen. They don’t care if we live or die.” 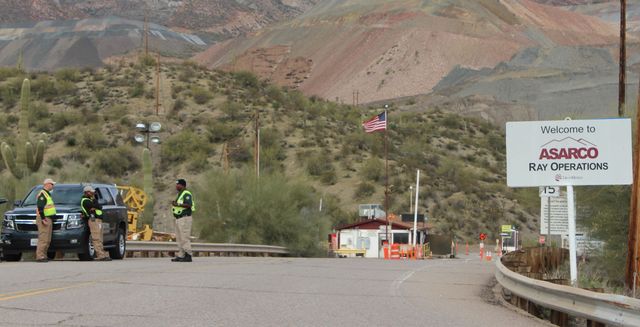 Security patrolling the Ray mine

The ore-hauling trucks that miners operate weigh roughly 320 tons and have repeatedly been cited in the death of miners in horrific accidents caused by their blind spots. In 1998, the Mine Safety Health Administration (MSHA) found that 120 miners were killed and 1,377 injured from 1987 to 1996 due to three main causes, one of which was “blind areas on self-propelled mobile equipment.” While the mining corporations spend upwards of $1 million on each haul truck, they have refused to spend a few thousands dollars to install basic camera equipment on the trucks to improve their safety, while MSHA has not mandated that they do so.

Composed primarily of white and Latino workers, most of those at the Ray mine picket line voiced support for socialist policies and hostility toward Trump and the anti-immigrant sentiment he seeks to cultivate. Overall, the sentiment of the workers was internationalist, with many miners denouncing Grupo México for allowing 65 miners to die, while recovering the bodies of only two, after the 2006 explosion at the Pasta de Conchos mine in Mexico. A number of miners also spoke about the growing number of strikes, in particular those of nurses and teachers in recent years.

As opposed to this internationalism, the USW bureaucrats have promoted economic nationalism throughout the strike in an attempt to divide Asarco workers from their class brothers and sisters internationally. At a protest on December 16, Karla Schumann, secretary-treasurer of Teamsters Local 104, made a statement declaring, “Grupo México is a rogue company that believes it can ignore US labor laws, violate international labor standards, recklessly exploit the environment and abuse US workers and their communities like they do in Mexico.” 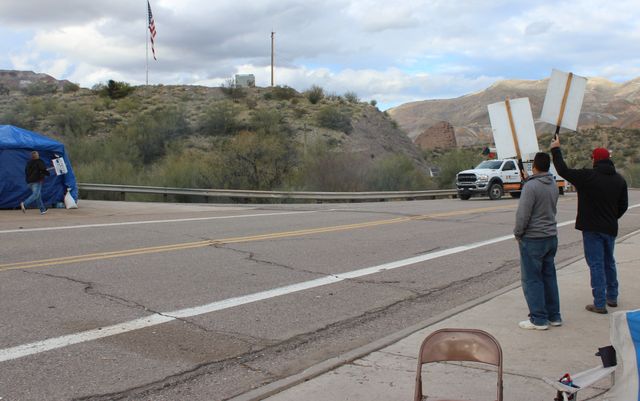 Striking miners denounce a scab leaving the Ray mine

In reality, as with most transnational corporations, Grupo México is largely controlled by Wall Street, including the investment firms Fidelity, Vanguard and Lazard.

Many of the miners who spoke to the World Socialist Web Site were very critical of the unions, noting that they force the workers to go through the degrading process of applying for a hardship grant just to get food and gas cards. When our reporter explained that the USW has at least $150 million in its strike fund, one worker commented, “They could run their own bank!” When the WSWS stressed that this is the workers’ money, the same miner responded, “Yeah, just like these are our jobs,” implying that the miners have no control over either aspect of their lives.

In discussing the role of the unions, the WSWS reporters elaborated a fighting strategy for the miners based on electing their own, independent rank-and-file strike committees, a perspective that aroused great interest. The miners are aware that they remain isolated due to the policies of the unions and are seeking to break through that isolation.

Many workers thanked our reporters for covering their strike, noting that the local press in Phoenix—the sixth largest city in the US—hadn’t written a single article on their months-long struggle. Many workers voiced contempt for both the Democratic and Republican parties, while some had illusions in Bernie Sanders or thought that Trump was an outsider who is “draining the swamp” in Washington.

A veteran miner stated emphatically, “The rich couldn’t care less about us. The politicians are in their pockets, whether it’s Trump or the Democrats.”

Another miner said, “It doesn’t matter whether we’re Democrats, Republicans, conservatives, socialists, it’s been ingrained in all of us not to be scabs. We all grew up in the unions. We’re fighting for each other. It doesn’t matter what party you believe in around here, everybody works their ass off.” The north end of the massive Ray mine

Many miners said they were second and third generation miners, and had worked for companies that were taken over by Phelps Dodge, Freeport or other mining companies.

Tanis said, “I remember the ’83 [Phelps Dodge] strike in Morenci. That was a nasty one. Families were divided between strikebreakers and scabs. To this day, they won’t talk to each other.”

Speaking of the assault Asarco is threatening against their pension benefits, a young worker with eight years at the company said, “As far as they’re concerned, we’re living too long. Workers are retiring and living to 92. If it was up to them, we would die a year or two after retiring.”

He continued, “Everywhere that I’ve worked, they’re cutting pensions, so all we can do is try to chase the dollar, getting the best wages we can. If you’re on a 401k and making $15/hour, you can’t survive, you can’t afford health care, you can’t afford to retire. So, we’re just saying ‘enough is enough.’

“Since I’ve been here, it’s been non-stop fighting for a contract. They have a two-tier wage system in here. It’s not 50 percent like in the auto industry, but you can have a worker making $21.50 working right next to a guy making $27.50 doing the same work.”

The miners also described how Asarco has cut back funding for local community services in Kearny, including closing a pool and a library, and discussing disincorporating the town.

Speaking with residents in Kearny, WSWS reporters met an Arizona teacher whose husband used to work at Asarco. She said the teachers supported the Asarco strikers. “My husband couldn’t stay there because they don’t care, they don’t pay enough to workers,” she said. “Now they want to take two times as much out of pocket for health care expenses. Grupo México doesn’t care about Kearny, they’re cutting the services. When the teachers were on strike, the teachers themselves launched the strike, not the unions. The unions abandoned the workers.”

Miners in the US