Iranian, Russian and Chinese warships are finishing today a four-day naval exercise in the Gulf of Oman, near the Iranian coast and the oil-rich Persian Gulf. The exercise marked the first time that Moscow and Beijing sent warships for joint maneuvers with Iranian forces in the Indian Ocean. 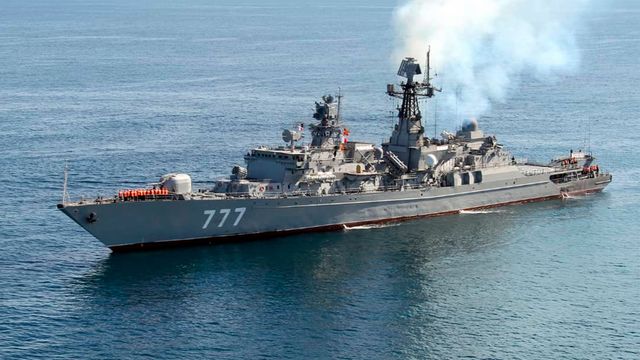 A warship sails while approaching Iran's southeastern port city of Chahbahar, in the Gulf of Oman. Iran's navy on Friday kicked off the first joint naval drill with Russia and China in the northern part of the Indian Ocean. (Iranian Army via AP)

The chief of the Iranian fleet participating in the exercise, Rear Admiral Gholamreza Tahani, said that its purpose was to demonstrate the close relations between Iran, Russia and China. “The message of this exercise is peace, friendship and lasting security through cooperation and unity, and its effect will be to show that Iran cannot be isolated,” Tahani said. He added, “Us hosting these powers shows that our relations have reached a meaningful point and may have an international impact.”

The exercises were in fact a signal sent to ruling circles in Washington and in the imperialist capitals in Europe that a US-led war with Iran could rapidly escalate into a direct, all-out conflict involving the world’s major nuclear powers.

In June, after Iran shot down a US drone over its territorial waters in the Persian Gulf, Trump tweeted that he had aborted US missile strikes ten minutes before they were to begin. With Iran, Russia and China all facing stepped-up military threats and pressure from Washington, Beijing and Moscow decided to send warships to strategic waters off Iran’s coast to signal that a US or NATO war with Iran would not remain confined to the Middle East.

The exercise itself unfolded under the shadow of growing US and Israeli war threats against Iran, which have escalated since Washington unilaterally scrapped a six-party nuclear treaty with Iran last year and re-imposed devastating sanctions on Iran’s economy.

As Russian warships arrived in Iran on Wednesday, Israel’s Army Chief of Staff Aviv Kohavi called for military action against Iran. “It would be better if we weren’t the only ones responding to them,” Kohavi said, in what the Times of Israel called a rebuke to Washington, the Saudi monarchy and other Persian Gulf oil sheikdoms for not attacking Iran earlier. Kohavi added that Israeli forces would operate openly as well as clandestinely across the area, “even at the risk of war.”

Iranian Deputy Army Commander for Coordination Affairs Habibollah Sayyari warned in turn that the ships involved in the exercise would fire on any vessel trying to spy on them. “Many countries are definitely seeking to know what the matter is. Spies have also taken action,” he said. “We will hit whatever spying craft are in the war game zone.”

Russian and Chinese officials guardedly expressed concern over possible war and their support for Iran. Russian Foreign Ministry spokeswoman Maria Zakharova said: “We are dealing with the issues of maintaining stability in the region, security and the fight against terrorism. This co-operation and interaction are built on both a bilateral and multilateral basis but exclusively on a legal basis.”

Chinese Defense Ministry spokesman Wu Qian said, “The drill will deepen exchange and cooperation between the navies of the three countries.” Wu called the exercises “normal military-to-military co-operation,” adding that they were “not necessarily connected with the regional situation,” an apparent reference to the risk of a US war of aggression against Iran.

The identity of ships involved in the exercise belied official claims that it only aimed to practice antipiracy and rescue operations, however. Russia’s Baltic Fleet guard ship Yaroslav Mudry, the tanker Yelnya and the tug Viktor Konetsky, and the Chinese guided missile destroyer Xining are involved. The Xining is nicknamed the “carrier killer,” as it carries many anti-ship and land-attack cruise missiles designed to sink large hostile warships, like US aircraft carriers, in long-range strikes.

US State Department officials contacted by the Financial Times denounced the drill, warning Iran that it should “think twice” about joint military exercises. Referring to the fact that roughly a third of the world’s internationally traded oil passes through the Gulf of Oman, the US officials hypocritically added that these war games “should concern all nations with an interest in safeguarding freedom of navigation in the region.”

The main danger to the region, however, has been the wars launched by US imperialism and its European allies since the Stalinist regime dissolved the Soviet Union and restored capitalism in 1991. Decades of war in Iraq, Afghanistan, Libya, and Syria claimed millions of lives, forced tens of millions to flee their homes, and spawned bitter proxy conflicts across the region. Trump’s sanctions and war threats against Iran continue this policy of trying to forcibly dominate the region.

Iran, Russia and China moved to support Syrian President Bashar al-Assad against the proxy war NATO launched in Syria in 2011, committing military or intelligence forces to support Assad even as NATO’s war claimed hundreds of thousands of lives. Now, facing a NATO military build-up in Eastern Europe and the intensifying US “pivot to Asia” and trade war threats against China, Moscow and Beijing are signaling that they would offer similar support to Iran.

The threats of US military action against Iran and trade war tariffs have also intensified tensions between Washington and its ostensible allies in Asia and Europe, and an imperialist military escalation in the Persian Gulf is now underway. The same inter-imperialist rivalries over control of resources, markets and profits that twice exploded into world war in the 20th century again threaten to erupt into war in the 21st.

Amid growing tensions in the Persian Gulf after Washington scrapped the Iranian nuclear treaty, the Japanese oil tanker Kokuta Courageous was hit by a missile strike. Iranian officials strongly denied US accusations that they had launched the missile and, significantly, Japanese officials declined to endorse these US accusations. Last week, Tokyo announced that it would dispatch warships to the Persian Gulf to guard Japanese merchant shipping in the area.

On December 19, French military officials confirmed that the frigate Courbet would join Danish and Dutch vessels in a European force patrolling Persian Gulf oil waterways. Amid the Brexit crisis, Britain has not joined the European mission but has instead committed its ships to a US-led force in the region, together with Australia.

While Iran, Russia and China are targeted by imperialist aggression, this does not make the military maneuvers of Tehran or the post-Stalinist capitalist regimes in Russia or China progressive. Oscillating between attempts to cut deals with Washington and threatening to launch a catastrophic conflict that could escalate into all-out nuclear war, they neither can nor want to appeal to growing anti-war and anti-capitalist sentiment in the international working class. They are terrified of the growing threat they feel from below.

The year 2019 has seen a historic upsurge of strikes and mass social protests from US auto factories and mines, to the French “yellow vest” and public sector strikes, the national teachers strike in Poland, and mass protests from Algeria and Lebanon to Iraq and Hong Kong. Explosive anger against social inequality goes hand-in-hand with growing opposition to imperialist wars. Within these developing struggles, it is critical to build an international anti-war movement in the working class.

The anti-Russia campaign in the US

The war drive against Russia