With fire engulfing entire swathes of the country, Australian Prime Minister Scott Morrison—who built his political reputation by denying the reality of global warming and rejecting the need for any reduction in fossil fuel use—has become the legitimate target of mass popular anger. In the eyes of millions, he personifies the responsibility of the ruling elite for the social consequences of the climatic change underway and the drastic impact it is having on their lives. 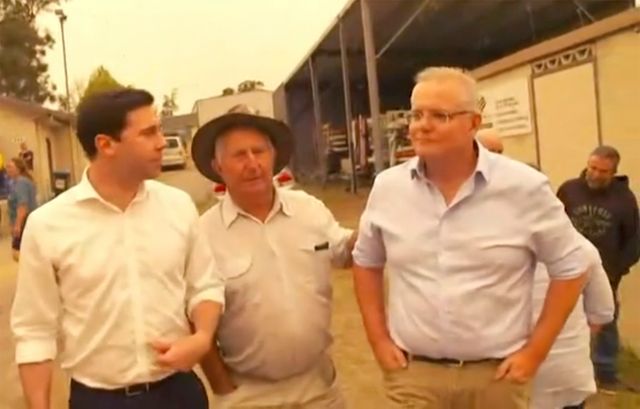 Australian Prime Minister Scott Morrison was confronted by angry residents as he visited a wildfire-ravaged Cobargo, in New South Wales on Thursday, Jan. 2, 2020 (AuBC via AP)

The first days of 2020 have witnessed harrowing scenes. Fire has threatened lives and property across the continent—from Western Australia to Queensland in the northeast, to South Australia and the southern island state of Tasmania. Communities in the eastern region of the southern state of Victoria and the adjoining South Coast region of New South Wales (NSW), have suffered some of the greatest destruction.

Captured in graphic footage that has travelled around the world, some 5,000 residents and stranded tourists in the Victorian coastal town of Mallacoota were ordered, on December 31, to seek safety on the beach and instructed to await a siren signal that would mark the necessity for them to flee into the ocean. With all access roads blocked by fire, a Navy troop transport has now been dispatched to evacuate Mallacoota’s population.

At least 450 homes have gone up in flames since Wednesday. Since late August, when the fire season began months earlier than usual, some 1,300 houses have been destroyed. At least five million hectares of bushland have been incinerated. Hundreds of millions of wild animals are believed to have been killed, including up to one third of the koala population. Stock losses have not yet been tallied.

Mallacoota is only one of dozens of communities in Victoria and southern NSW that have become inaccessible by road. In many areas, electricity and mobile phone reception has been lost, due to the destruction of power lines and signal towers.

And the human toll is growing. Three volunteer firefighters in NSW have been killed combatting the blazes. In total, at least 19 people have lost their lives in the fires. Sydney and its sprawling suburbs are ringed with fire to the northwest, west and southwest. Fires have affected the outer reaches of Melbourne. The most populated areas of Australia are blanketed with toxic smoke and the air contamination is expected to cause large numbers of premature deaths.

Temperatures are predicted to soar past 40 degrees Celsius across most of the continent this weekend. Combined with strong winds, which will exceed 100 kilometres an hour in some regions, the latest heatwave will exacerbate the fires and the pressure on already under-resourced and increasingly exhausted volunteer firefighting crews. The Victorian state government has declared a “state of disaster,” giving it the power to order evacuations and impose what effectively amounts to martial law. The NSW government has declared another seven-day “state of emergency,” providing it with similar powers.

Under these conditions, Prime Minister Morrison made an unannounced visit yesterday to what remains of the small southern NSW township of Cobargo, which was ravaged by a wall of flame early on January 1. Two people were killed there trying to defend their home.

Morrison was greeted with unconcealed hostility by traumatised residents. A young woman refused to shake his hand, demanding that he increase support for the volunteer firefighting services and provide “help” to those who had lost their properties. Another resident shouted that that the prime minister “should be ashamed of himself” for having abandoned the “country to burn.” Others shouted that he was “not welcome.”

Last month, the prime minister left Australia for a holiday in Hawaii, as the fire situation worsened. He provoked further fury and incredulity on New Years’ Eve, with a statement that the blazes were the “backdrop” to a cricket match between Australia and New Zealand.

When Morrison and an accompanying media pack strode into the Cobargo fire brigade building, a firefighter refused to stand up to greet him or shake his hand. Later, Morrison attempted to rationalise the man’s actions by stating he was probably “tired.” He was bluntly told that the reason was more likely that the firefighter’s own home had burnt down the day before.

The local member of parliament, part of Morrison’s Liberal-National Coalition government, told journalists: “To be honest with you, the locals probably gave him the welcome he probably deserved.”

Morrison’s reception in Cobargo was only one indication of the outrage that exists toward federal and state governments and the Coalition and Labor parties that dominate official politics. For decades, climate scientists have warned that global warming would drastically intensify the impact of weather-related disasters around the world, including the scale and destructiveness of the fires that break out each year across the Australian continent.

The warnings were simply ignored, even as the evidence of climate change was being registered in the rise of average temperatures. Between 2005 and 2019, Australia experienced ten of its hottest years on record. The drought conditions affecting much of the continent, and giving rise to the current fire emergency, are no aberration, but a long-term trend. At the same time, the tropical north of the continent is experiencing increased rainfall, bringing with it more frequent and devastating flooding and cyclone intensity.

Like their counterparts around the world, Australian governments, on behalf of the financial and corporate elites, have turned a blind eye. Australian capitalism, the largest exporter of coal in the world, has, in many respects, led the way internationally in resisting any serious reductions in global carbon emissions.

Nothing has been done to prepare the population for the consequences. While tens of billions of dollars have been squandered by successive governments, equipping the military with everything from new warships to jet fighters and armoured vehicles, the largely volunteer, state-based firefighting services have faced further funding cuts. A well-resourced and highly-trained professional emergency service does not exist to carry out the necessary preventative measures required each year to contain fires, or to respond to the type of emergency now unfolding.

Australian federal and state governments do not even own their own substantial fleet of firefighting aircraft and helicopters. Instead, during each fire season it contracts them, mainly from the United States. More than a decade after the catastrophic 2009 Black Saturday fires in Victoria, a national policy has still not been enacted to place the powerlines, which sparked many of the fires, underground.

The relationship between the corporate profit that flows to the capitalist class and the criminal refusal of the ruling elite to take action to stem climate change was summed up last week by Bob Dudley, retiring chief executive of energy conglomerate British Petroleum (BP). Dudley declared: “Some say, ‘we’d like you to move from oil and gas quickly to renewables.’ We say ‘OK, do you want us to cut the [stock] dividend?’”

The answer of the stockholders, Dudley observed, has been “no, don’t do that.’” He predicted that, with the current profit-driven prerogatives of corporations and governments, the world would “not even come close” to phasing out fossil fuel use over the next 20 years or, by implication, achieve the emissions reductions necessary to avoid further severe global warming.

As millions of working-class people pay the price, the anger already being vented at politicians such as Morrison will only intensify, and begin to focus ever more sharply on the financial and corporate interests they serve.