The Harvard Graduate Students Union–United Automobile Workers (HGWU-UAW) announced it was shutting down its strike against the Ivy League university as of midnight, December 31, directing workers to return to work January 1. The strike, which began December 3, was ended with no contract and no agreement on the central demands of striking grad students. The union is holding out the possibility of resuming the strike at a future date. 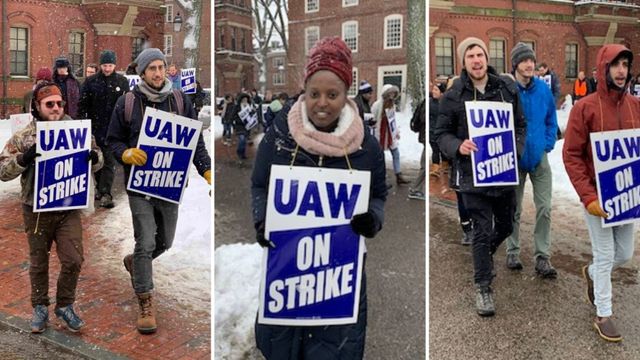 Harvard grad strikers at a gate to the university

Grad students grade papers, help teach classes, do research and perform other essential work on campus—all for near-poverty wages. The shutdown of the strike is a complete capitulation by the UAW, which exploited the genuine anger of graduate student workers over their exploitation by Harvard in a nearly month-long stunt that achieved virtually nothing.

In its message to student workers, the HGWU-UAW bargaining committee claimed that the strike “had accomplished a new foundation to finish negotiations.” This foundation, it maintained, was the signing of six new tentative agreements protecting workers’ rights.

No agreement was reached on the three main issues that provoked the strike: wages, health care and grievance procedures for discrimination and sexual harassment complaints.

In a December 19 statement, the Office of the Provost wrote that the university had “proposed to HGSU–UAW that we engage the Federal Mediation and Conciliation Service (FMCS) and have them appoint a federal mediator to assist us.”

However, the Boston Globe reported December 30 that “no such timeline has been given” by Harvard to achieve a contract by the end of January, with a university spokesman saying the December 19 message from the provost was “not a deadline but rather an expression of hope that differences can be resolved.”

There is also the distinct possibility that the university is making supposedly good faith promises while awaiting a decision on a new rule proposed by the National Labor Relations Board (NLRB) in late September that would reverse the ruling that first granted graduate students the right to unionize. Harvard, as a private institution, would have only a “voluntary” obligation to recognize a graduate student union if the new rule were approved.

The Harvard strike came in the wake of the struggle of autoworkers at General Motors, Ford and Fiat Chrysler, which included a 40-day strike by 48,000 workers at GM that began in mid-September. The GM strike was the first major auto strike in the US in more than four decades and marked the entry of American industrial workers into the growing wave of strikes and protests in the US and internationally.

The GM strike was called only due to pressure from autoworkers, who were determined to win back wages and benefits and stop plant closures agreed to by the UAW over decades. Despite the unity and determination of autoworkers to fight, sellout contracts were imposed by the UAW at the three automakers. The UAW, which has been embroiled in a series of corruption and embezzlement scandals, is viewed with contempt by tens of thousands of autoworkers.

The union, anxious to bolster its dues base depleted by the destruction of thousands of autoworkers’ jobs as a result of the union’s betrayals, has been working to organize low-paid campus workers. Region 9A has organized locals at numerous Northeast campuses, including Columbia University, New York University, the University of Connecticut, the University of Massachusetts and The New School.

Following several years of union organizing, Harvard announced in May 2018 that it would recognize HGWU-UAW as the grad students’ bargaining unit. After more than a year-and-a-half with no contract agreement and 28 bargaining sessions with the university, by the end of October more than 90 percent of the union had voted in favor of the strike and a December 3 strike deadline was set.

After nearly a month on strike, the walkout was abandoned following a December 18 bargaining session between the union and Harvard, in which the university refused to make any substantial concessions on wages, health care or grievance procedures. Harvard, which has an endowment topping $40 billion, offered an insulting 8.2 percent increase over three years for research assistants, 7.2 percent for teaching fellows, and $17 per hour for instructional work.

In November 2018, the Graduate Workers of Columbia–UAW and the Columbia Post-Doctoral Workers–UAW entered into a “framework agreement” with Columbia University as the “exclusive bargainers” for students. Columbia received a 14-month no-strike clause, while the students won only the “privilege” of being represented by the UAW and paying dues to the union bureaucracy. Harvard grad students are now in a similar situation.

The UAW’s shutdown of the Harvard strike and capitulation to the university administration stand in contrast to the resolve of grad students to improve their conditions and fight the university’s attack on their rights and attempts to maintain them in servitude to the university. The outcome of the strike has demonstrated that the UAW, to which the HGWU is affiliated, is not a legitimate instrument of their interests.

The strike won the support of faculty, students and other university workers—and made some impact on the grading of student papers and exams—but the union made no attempt to organize campus-wide action. Student workers organized independently to win the support of UPS workers, many of whom refused to cross their picket lines set up at delivery docks.

Instead of rallying workers’ support for the grad students, the union sent contingents from the Massachusetts Democratic congressional delegation, as well as state and local Democratic politicians, who made hollow pledges of support. Candidates for the Democratic presidential nomination, including Elizabeth Warren, Bernie Sanders and Pete Buttigieg, tweeted their support.

The UAW made no effort turn out to transit workers, city workers and area teachers who are the natural allies of the grad students. Nor was there an attempt to mobilize the thousands of workers and professionals among the region’s universities, research facilities and hospitals, many of whom oppose the austerity, immigration and war policies of the two big-business parties.

The struggle of Harvard grad students and their counterparts at universities across the county is not a settled question. Harvard grad students who maintained during the strike that the UAW was “doing all it could” need to reevaluate this position. To win their struggles, grad students and other university workers require organizations that will fight for their social and democratic rights. But these organizations, rank-and-file committees democratically controlled by the workers themselves, must be independent of the pro-capitalist and nationalist trade unions.

In the course of recent campus struggles, the International Youth and Students for Social Equality has advanced the fight for the formation of rank-and-file strike committees, fighting for what students and their families need, not what university administrations claim they can afford. We urge grad students who agree with this fight to contact the IYSSE today.