Over the holidays, federal Defence Minister Annegret Kramp-Karrenbauer (Christian Democratic Union, CDU) reiterated her call for a massive expansion of the Franco-German campaign in the Sahel region. In an interview with the Frankfurter Allgemeine Sonntagszeitung, she said the German military must “not duck away” in this region. 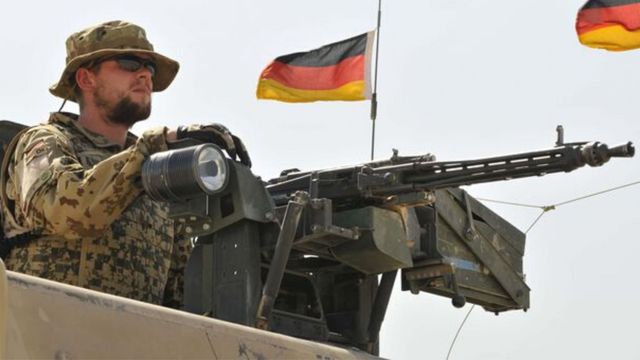 While the Bundeswehr (Armed Forces) has so far mainly taken on logistical tasks and trained the troops of the Malian regime, the French military, she said, was engaged in “a much more robust mission.”

However, it was increasingly questionable, Kramp-Karrenbauer said, “whether this division of labour can be maintained.” Germany, according to the minister, must in future “ensure stability” in the region in its “own interest” and to do so, “needs a more robust training mandate.”

Hans-Peter Bartels (Social Democratic Party, SPD), parliamentary Commissioner for the Armed Forces, sang from the same hymn sheet, calling for “uniform coordination and leadership” of all “civil and military aid to the precarious Sahel states.” Europe must not “powerlessly watch the failure of the pro-Western governments.” Closer cooperation with the French troops was “certainly the right approach,” Bartels said.

The Bundeswehr has been stationed in Mali since 2013. Up to 1,100 German soldiers have taken on logistical tasks within the framework of the Minusma UN mission and support of Operation Serval (since 2014, Barkhane) of the French army, which defends the unpopular regime in Bamako with 3,500 soldiers against oppositional militias. A further 156 Bundeswehr soldiers are training Malian soldiers as part of the EU mission EUTM.

In neighbouring Niger, which has been armed to the teeth by Germany in particular, the Bundeswehr maintains a military base that acts as a “hub” for all German military operations in the Sahel region. Elite soldiers of the Navy’s Special Forces (KSM) have been engaged in combat operations in the country for months without a mandate and at the same time, training special units of the Nigerien military.

Minusma, with 116 UN soldiers killed between 2013 and 2017, is the most loss-prone UN mission since the Korean War.

The French military is undertaking offensive operations against the militias, triggering growing resistance. Two weeks ago, it officially deployed an armed drone for the first time, killing seven rebels in the Mopti region. A further 33 were “put out of action,” as President Macron declared during a visit to the Ivory Coast. Thirteen French soldiers were killed in November when the two helicopters they were riding in crashed in northern Mali.

The main reason for the intensification of the war in Mali and the Sahel is growing conflict between the major powers over control of resources in the region, including gold and uranium. France, the former colonial power, and other European imperialist powers are seeking to defend their interests against their international rivals. The Sahel is a focal point of growing rivalries between Europe, the US, China, Russia and even India, all of which are trying to gain a foothold in Africa.

In addition, France and Germany are trying to prevent refugees from Africa from continuing their journey towards the Mediterranean and Europe by sealing off the borders and setting up concentration camps. The United Nations estimates that a quarter of a million refugees are currently trapped in Mali and its neighbouring countries alone. The result of this neo-colonial campaign is untold suffering and thousands of deaths.

The Bundeswehr's combat mission in Mali, which Kramp-Karrenbauer and the grand coalition of the Christian Democrats and Social Democrats are planning to launch, aims to intensify the brutal war against Islamist rebels, the local population and African refugees and to press the interests of German imperialism in Africa.

As recently as November, the German government held an Africa conference in Berlin, which was attended by heads of state and government from twelve African countries. The conference’s main purpose was to pave the way for German companies to gain a foothold in Africa.

“Whoever wants to do business cannot get past Africa,” the German media commented at the time. And, “It is in our own best interests if Germany, if Europe as a whole, turns much more strongly to Africa and becomes involved there. Politically and economically.”

To achieve these goals, the grand coalition is prepared to kill civilians and sacrifice the lives of soldiers.

When asked by the Frankfurter Allgemeine Sonntagszeitung, “Will our death toll be higher if we take on more responsibility,” Kramp-Karrenbauer answered affirmatively: “Every mission is dangerous. The security situation in Mali had deteriorated massively. This confronts all of us in Europe with the question of how to deal with this region in our own interest.”

“In the Sahel region,” Kramp-Karrenbauer noted, “a major hub for terrorism, organized crime, migration and human trafficking is currently emerging. We will have to consider and decide whether we want to ensure stability on the ground in our own interest and whether the Bundeswehr does not need a more robust training mandate here alongside our allies.”

Mali and the Sahel zone are only one of the regions of the world in which the Bundeswehr is to be increasingly deployed. In an “order of the day at the turn of the year” the defence minister said she was preparing “our soldiers” for a massive escalation of international operations.

“Responsible security and defence policy” meant “strengthening our partnerships and alliances,” “sharing the burden” and “deploying the full spectrum of our capabilities,” she wrote. It is “good news that the defence budget will increase for the sixth consecutive year. We have more than 45 billion euros at our disposal for 2020. That is a good 1.8 billion euros more than in 2019 for a Bundeswehr ready for action. The other milestones are clear: 1.5 percent of GDP in 2024, 2.0 percent of GDP by 2031 at the latest.”

“This is the basis for a modern and powerful force,” she concluded.

Kramp-Karrenbauer's course is supported and defended by all parties in the Bundestag.

The new SPD leader, Saskia Esken, called Kramp-Karrenbauer’s Mali initiative “unthought-out” and demanded that she develop her foreign policy proposals “together with Foreign Minister Heiko Maas (SPD) in responsible cooperation within the coalition.”

But the Social Democratic foreign minister is one of the main advocates of increased German military operations. When the Bundestag passed the new military budget, he had boasted of Germany's engagement in Syria, Libya, Ukraine and Afghanistan: “Anyone who talks about Germany's responsibility in the world must realise that in all these crises we are currently dealing with, Germany has now mostly taken the leading role in conflict resolution.

The far-right Alternative for Germany (AfD), the Greens and the Left Party also support increased Bundeswehr deployments when it comes to representing German great power interests.

Despite the unanimity among the parties in the Bundestag, there is strong opposition from the population, the majority of whom reject such missions. In order to combat and suppress this resistance, Kramp-Karrenbauer promised in her “order of the day” to further strengthen the presence of the Bundeswehr in German society, among other things through public swearing-in ceremonies in front of the Reichstag building and in many other places.