After another weekend of devastation, Australia faces weeks more of unprecedented fires

Intense heat and winds over the weekend fanned the fires that have been engulfing ever-increasing tracts of Australia since September. The south east of the continent—including the Gippsland and North Eastern districts of the state of Victoria and the South Coast, Southern Highlands and Snowy Mountains districts of the state of New South Wales (NSW)—have been the most severely impacted in recent days, along with Kangaroo Island off the coast of South Australia.

Raging blazes forced tens of thousands of people to seek safety in emergency centres or on the waterfront, while exhausted fire crews focused on saving properties in the face of unpredictable and volatile fires so large that they generate their own weather. Inland rural communities and coastal towns, best known as either popular summer tourist destinations or productive agricultural areas, have been cut off by road closures and the loss of electricity and mobile phone reception.

In NSW, the Rural Fire Service (RFS) commissioner Shane Fitzsimmons stated on Sunday evening that there had been “a lot of damage and destruction.” He announced that at least 60 homes had been lost but warned that property losses over the weekend could run into the “hundreds.” In Victoria, at least 110 properties were lost, a figure that is also expected to soar as assessments are made in currently inaccessible areas. 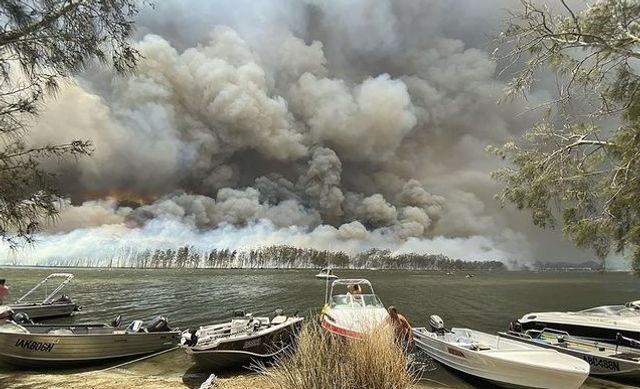 The number of deaths attributed to the protracted 2019–2020 fire season currently stands at 24. Two men were killed on Kangaroo Island and another died fighting fires in southern NSW on the weekend. At least 1,600 homes have been destroyed, along with hundreds of farm buildings and vehicles. The Insurance Council of Australia has reported that its member institutions have so far received 5,850 bushfire claims, totally some $375 million, and expect thousands more claims. Stock losses are likely to be very high in some of fire ravaged agricultural areas.

Around seven million hectares of bushland have now been burnt out, with the most severe summer months of the fire season just beginning. By comparison, approximately one million hectares were burnt out in the Amazon fires in mid-2019 and some 765,000 hectares during the wildfires that ravaged California in 2018, and 105,000 hectares in 2019.

Conditions have eased slightly at the beginning of the week, with lower temperatures and a small amount of rainfall in some areas, though far from enough to extinguish the fires. By the end of the week, however, heat and winds will soar. Andrew Crisp, the Emergency Management Commissioner in Victoria, stated bluntly to journalists yesterday that the fires “will take off again.”

A large proportion of the Australian population is breathing hazardous air due to the sheer volume of smoke blanketing much of the country. Canberra, the national capital, was ranked last week as the most polluted city on earth as smoke blew in from fires to its north, south and east. Government departments sent notices last night to thousands of public servants not to come to their offices for the next 48 hours. The National Art Gallery and universities have closed.

The fire crisis is unprecedented and is the scientifically predicted outcome of long-term global warming. The rise in temperatures and related climatic shifts have resulted in the south of the Australian continent experiencing hotter conditions, reduced rainfall and more frequent and severe drought over the past three decades.

2019 is now officially the hottest year on record in Australia, meaning the 10 hottest years on record have been in the 14 years since 2005. On Saturday, the north-western Sydney suburb of Penrith was one of the hottest places on earth, with a temperature high of 48.9 degrees Celsius (120 degrees Fahrenheit). The previous high in the sprawling working-class area was 47.3C in January 2018.

The increased impact of heat, drought and fire in the south of Australia is just one consequence of the change brought about by global warming. In the tropical north, communities are once again preparing for a catastrophic “wet season,” which now brings historic levels of rainfalls as well as the prospect of larger and more destructive more intense cyclones. The flooding in north Queensland in January–February 2019 was the worst on record.

A discernable shift is underway in how masses of people view the political parties and institutions that have downplayed or denied the reality of climate change. Successive governments, both conservative and Labor, have responded with indifference and inaction to the increasingly strident warnings and the expert appeals for stepped-up preparations. Committed to the interests of the Australian capitalist elite, they have sought to defend the corporate profits that derive from fossil fuel use, while meeting the selfish demands for tax cuts by the wealthy. Vast resources have been allocated to building up the military, while even the pretense of international cooperation to stem global warming has been increasingly cast aside.

Australian Prime Minister Scott Morrison and his conservative Liberal-National Coalition government is the current focus of burgeoning popular anger. As recently as December, Morrison and members of his cabinet were continuing to insist that there was no need for “anxiety” as Australia has always experienced fires. As the country burned, Morrison left for a holiday in Hawaii. National Party leader and Deputy Prime Minister Michael McCormack labelled those linking the conditions to climate change as “inner-city raving lunatics.”

Morrison spent the weekend in face-saving efforts to ward off criticism of his government. On Saturday, he announced the largest call-up of part-time military reservists—some 3,000 in total—to assist the firefighting effort. The decision provoked a public outburst of frustration from the NSW RFS Commissioner Fitzsimmons, who only heard of the decision from the media. He was forced to allocate staff to establish what type of military personnel were being mobilised and whether they could even be of use.

The military call-up, moreover, has served only to underscore the extent to which the civilian fire, health and other services have been denied the funding, equipment and staffing necessary to respond to the type of conditions they now face. Billions are being spent on the preparations for war as the expense of essential services.

In April 2019, the Morrison government was warned in a letter sent by 23 former top fire and other emergency services officials that the coming fire season would be catastrophic. They called for a national summit to discuss preparations, including urgent moves to increase the number of firefighting aircraft that would be operational over Australia before the fire season began.

Despite being the most fire-prone continent, Australia does not have its own substantial national, professionally-staffed fleet of water-bombing planes and helicopters. Instead, a joint federal-state government authority, the National Aerial Firefighting Centre (NAFC), contracts aircraft from private companies, many from the US, depending on their availability and price of hire. The NAFC has been requesting greater funding since at least 2016 and received only token additional resources.

The state services responsible for fighting fires outside of the metropolitan areas are largely made up of volunteers. As recent days have demonstrated again, community-based fire units with intimate knowledge of the local terrain and conditions are irreplaceable in the midst of fires. However, the personnel and equipment available to bodies such as the Rural Fire Service in NSW and Country Fire Authority (CFA) in Victoria is inadequate.

The indifference shown by the Morrison government towards the bushfire crisis and its victims is simply the sharpest expression of the attitude of the political establishment as a whole, including the Labor Party opposition. Governments at the state and federal level, Labor and Liberal, are responsible for the lack of funding for fire services, the lack of disaster planning and, along with governments around the world, for the climate change that is a major factor in creating the conditions for the widespread bushfires.

All of them defend the profit system that places profits ahead of the lives and well-being of masses of ordinary working people. Socialism, and the vast economic, political and social change that is necessary on a world scale to address climate change, will come about only as the byproduct of an international and independent movement of the working class.