The US propaganda machine justifies the assassination of Qassem Suleimani

Over the past two days, millions of people have marched in cities throughout Iran and Iraq to condemn the killing of Qassem Suleimani. The response to the assassination contradicts the narrative constructed by the Trump administration, the Democratic Party and the media to legitimize an illegal act of war.

Within hours of the assassination, the vast American propaganda machine began churning out the latest update of its never-ending “bad man” theory of politics. Yet another anti-American evil-doer had received his just desserts.

Trump’s inane and sadistic chortlings have found their inevitable chorus. In statements echoed hundreds of times on TV networks, Margaret Brennan, the host of CBS’s “Face the Nation,” declared, “Qassem Suleimani directed mass murder” and “killed thousands of people in the region.” This script was incorporated into the responses of countless politicians, including Trump’s supposed opponents in the Democratic Party. 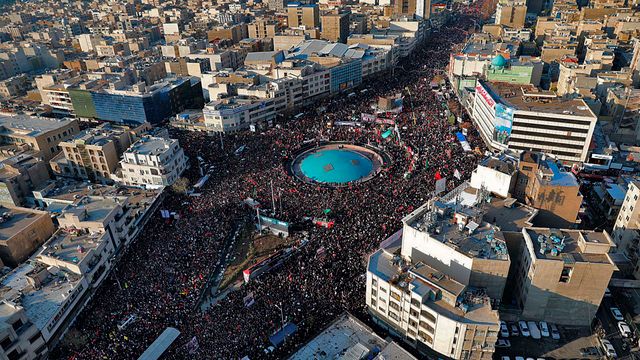 Mourners attend a funeral ceremony for Iranian Gen. Qassem Soleimani and his comrades, who were killed in Iraq in a U.S. drone strike on Friday, in Tehran, Iran, Monday, Jan. 6, 2020. (Office of the Iranian Supreme Leader via AP)

Presidential candidate Elizabeth Warren intoned, “Suleimani was a murderer, responsible for the deaths of thousands.” Former Vice President Joe Biden added, “He deserved to be brought to justice for his crimes against American troops and thousands of innocents throughout the region.”

While reservations and concerns have been expressed about the tactical consequences of the action, and over Trump’s failure to consult with the appropriate security-cleared congressional leaders and provide proof that the US was confronted with any sort of imminent danger, there has been no protest against the brazen criminality of the murder, let alone any denunciation of the targeting of Suleimani.

The underlying moral legitimization of the assassination is the critical element of the political narrative that is left unchallenged.

The reason for this is that to present with any degree of honesty the life of Major General Qassem Suleimani would require acknowledging the politically criminal and morally filthy role that the United States and successive presidential administrations have played in subverting the interests of the people of Iran and the entire Middle East for upwards of 70 years.

First, some basic facts. Qassem Suleimani was not a terrorist or a murderer. He was a senior military officer and a political leader, traveling to Iraq in an official capacity as a diplomatic representative of a state of 82 million people.

He had just arrived in Iraq to meet with the Iraqi prime minister to discuss peace talks between Iran and Saudi Arabia. “I was supposed to meet Suleimani at the morning the day he was killed, he came to deliver me a message,” Iraqi Prime Minister Adil Abdul-Mahdi told the country’s parliament Sunday.

Abdul-Mahdi said Trump had personally thanked him for his diplomatic efforts, giving the impression that Suleimani was not threatened with harm. And yet, within hours, the Iranian general was dead, in what Abdul-Mahdi condemned as a grave violation of Iraqi sovereignty.

Suleimani was born into a farming family on March 11, 1957. With his father facing bankruptcy and imprisonment for failing to meet payments on a loan from the government, Suleimani went to work on construction sites at the age of 13 to help pay his family’s debts.

In 1953, four years before Suleimani was born, the United States overthrew the democratically elected government of Iran and installed the dictatorship of Mohammad Reza Pahlavi, in one of the most notorious coups ever organized by the Central Intelligence Agency. After removing the nationalist leader Mohammed Mossadegh from power, the United States insisted upon and instigated a reign of terror against the Communist (Tudeh) Party, which had a mass following.

Countless thousands of Iranian workers, intellectuals and youth were consigned to the prisons and torture chambers of the SAVAK secret police.

SAVAK was implicated, according to the Federation of American scientists, in “the torture and execution of thousands of political prisoners.” Its methods, according to the FAS, included “electric shock, whipping, beating, inserting broken glass and pouring boiling water into the rectum, tying weights to the testicles, and the extraction of teeth and nails.”

Iran, allied with Israel, served as America’s “gendarme of the Persian Gulf.” Under the so-called “Nixon Doctrine,” the United States funneled vast quantities of arms to the Shah’s regime, which was seen, with Saudi Arabia, as being one of the “twin pillars” of US domination over the Middle East. US arms transfers to Iran increased from $103.6 million in 1970 to $552.7 million in 1972. The United States was confident that the Shah’s terror regime was impregnable.

In December 1977, President Jimmy Carter personally toasted the Shah with the following words: “Iran is an island of stability in one of the most troubled areas of the world.”

This was the Iran in which Suleimani grew up and came of age.

But in the course of 1978, a massive popular movement swept across the country. The Shah’s attempt to hang onto power with mass killings, egged on by the United States, failed. The key role in the destruction of the Shah’s regime was played by the working class, particularly through strikes that crippled the critical oil sector of the Iranian economy.

Due to the betrayals of the Stalinist Tudeh party, the leadership of the revolution passed into the hands of the clerical nationalists under Ayatollah Ruhollah Khomeini. But there was no question that the revolution was fueled by hatred of the neo-colonial suppression of Iran by the United States. Following the overthrow of the Shah and the Ayatollah Khomeini’s accession to power on February 11, 1979, the 22-year-old Suleimani joined the Revolutionary Guard.

In September 1980 the United States, allying itself with the regime of Saddam Hussein, encouraged Iraq to attack Iran, producing a devastating eight-year war that led to over one million deaths. Tens of thousands of Iranians were killed, including through Iraq’s widespread use of chemical weapons deployed with the assistance of the United States. It was during that war that Suleimani emerged as a significant military figure.

Determined to prevent the defeat of Iraq, the Reagan administration provided Iraq with weapons, logistical support and critical information. But its most infamous intervention against Iran came on July 3, 1988. The United States Navy, deliberately targeting a civilian aircraft, shot down Iran Air Flight 655, killing all 290 people on board, including 66 children. The war came to an end one month later.

The politics of Qassem Suleimani was that of a bourgeois nationalist. But as a military officer, he was engaged in the defense of an historically oppressed country. Suleimani’s “ruthlessness” in the conduct of his responsibilities as a military officer was, one can assume, a response to his experiences in war and countering the continuous threats emanating from the United States and Israel.

The same media mouthpieces that condemn Suleimani as a murderer are silent on the crimes committed by the United States since its initial invasion of Iraq in 1991, including brutal sanctions under the Clinton administration that killed hundreds of thousands.

Following the second invasion of Iraq in 2003, the US has been implicated in innumerable war crimes, from the sadistic torture and rape of inmates at the Abu Ghraib prison, to the massacre in Fallujah, to the mass slaughter in the so-called anti-ISIS campaign in Mosul in 2017, which included the rampage by Navy Seal Edward Gallagher, who stabbed a wounded teenager to death and posed with his corpse as if he were a slaughtered animal.

In 2017, Trump casually observed, “We’ve got a lot of killers. What, do you think our country’s so innocent?” Two years later, Trump tweeted in October 2019 that “millions of people have died” as a result of US wars in the Middle East launched under “false & now disproven premise, WEAPONS OF MASS DESTRUCTION.”

But as far as the US media is concerned, the violent actions of the US military are to be celebrated, as when it lionized Trump’s former defense secretary James Mattis, the butcher of Fallujah, known as “Mad Dog,” and laughed off his statement that “it’s fun to shoot” people.

The media helped set the stage for Trump’s act of murder. The New York Times, the Washington Post and other major US newspapers have repeatedly justified extrajudicial killings.

There is a poem by Rudyard Kipling, which famously concludes: “We are not ruled by murderers, but only—by their friends.”

Were he alive today, the poet would be compelled to change the final line to conform with the current reality:

“The American people are ruled by murderers, whose killings are sanctioned by their friends.”