At the Golden Globes awards ceremony on Sunday evening, British comic Ricky Gervais ruffled some feathers in Hollywood and the media, most of which deserved to be ruffled.

Gervais is best known for writing and acting in The Office, along with creating various other television series (Extras, The Ricky Gervais Show, An Idiot Abroad, Derek) and performing in films (The Invention of Lying, Special Correspondents, David Brent: Life on the Road).

At his best, Gervais is an observant, sharp-tongued critic of various forms of conventional wisdom. He can, however, often at almost the same instant, appear a little too pleased with himself and his own cleverness and success. 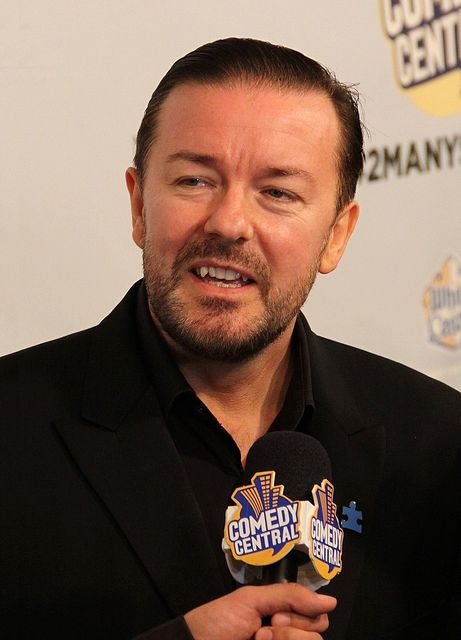 In an interview with the Hollywood Reporter that appeared before the Golden Globes, at which the Hollywood Foreign Press Association hands out its annual awards, Gervais offered some idea of his general approach to presiding at the event: “I try and play the outsider. It would be nauseating for me to come out and go, ‘Hey, George [Clooney], how you doing, thanks for letting me use your villa. Hey, Brad [Pitt], see you tonight, yeah?’ It’s horrible. I’ve got to be the bloke sitting at home who shouldn’t have been invited. That’s who I’ve got to be.”

This seems fair enough. Gervais’ persona, the ordinary English bloke, drinking a beer at the podium, who “doesn’t care” what anyone thinks, wore a little thin Sunday night, but, all in all, his targets deserved targeting. As he also told the Hollywood Reporter, “People like the idea of freedom of speech until they hear something they don’t like. So there’s still a pressure, but that doesn’t mean I’m going to water it down or back down and not say what I want.”

One had to enjoy most of Gervais’ jibes at the self-infatuated celebrities, which undoubtedly reflects a broader impatience with or even disdain for the cowardly and conformist #MeToo witch-hunt and the generally hypocritical “social justice” stance of wealthy entertainment industry liberals who never truly commit themselves to any cause.

“Let’s go out with a bang,” Gervais suggested during the NBC broadcast, “let’s have a laugh at your expense. Remember, they’re just jokes. We’re all gonna die soon and there’s no sequel, so remember that.”

Among other things, the comic mocked the dreadful state of studio filmmaking. “No one cares about movies anymore. No one goes to the cinema, no one really watches network TV. Everyone is watching Netflix. This show should just be me coming out, going, ‘Well done Netflix. You win everything. Good night.’ … Seriously, most films are awful. Lazy. Remakes, sequels. … All the best actors have jumped to Netflix, HBO. And the actors who just do Hollywood movies now do fantasy-adventure nonsense. They wear masks and capes and really tight costumes. Their job isn’t acting anymore. It’s going to the gym twice a day and taking steroids, really.”

Gervais also made fun of the obsession with race and identity: “Many talented people of color were snubbed in major categories. Unfortunately, there’s nothing we can do about that. Hollywood Foreign Press are all very racist. … We were going to do an ‘In Memoriam’ this year, but when I saw the list of people who died, it wasn’t diverse enough. No, it was mostly white people and I thought, nah, not on my watch. Maybe next year. Let’s see what happens.”

Gervais referred to the first season of his own series, After Life, in which a man contemplates suicide after his wife dies from breast cancer, observing, “Spoiler alert, season two is on the way, so in the end he obviously didn’t kill himself. Just like Jeffrey Epstein. … I know he’s your friend, but I don’t care.”

With Tim Cook, the CEO of Apple in the audience, Gervais commendably pointed out, “Apple roared into the TV game with The Morning Show, a superb drama about the importance of dignity and doing the right thing, made by a company that runs sweatshops in China. Well, you say you’re ‘woke’ but the companies you work for in China—unbelievable. Apple, Amazon, Disney. If ISIS started a streaming service you’d call your agent, wouldn’t you?”

The 58-year-old comic finished up, more or less, with: “So if you do win an award tonight, don’t use it as a platform to make a political speech. You’re in no position to lecture the public about anything. You know nothing about the real world. Most of you spent less time in school than Greta Thunberg.”

Certain critics complained that Gervais’ comments would give comfort to the right wing. Vanity Fair’s Mark Harris observed, “The idea that celebrities are not only pampered babies but hypocrites who cause the problems they make speeches deploring and should therefore shut up and act/sing/be grateful is a right-wing talking point, and an especially stupid one.” Los Angeles Times’ television critic Lorraine Ali chimed in along the same lines, “The last thing anyone needed was for the smirking master of ceremonies to reprimand them for having hope, or taunt the room for trying to use their influence to change things for the better.”

Indeed, certain far-right commentators expressed approval of Gervais’ routine, but this speaks more to the dimensions of the ideological problems in Hollywood—and to the predominance of identity politics in upper middle class layers generally—than to the actual content of the comic’s monologue.

The crowd of Green, “anti-patriarchal” and animal-loving actors and others includes talented and well-meaning individuals. However, lost in a world of wealth and privilege, even those who sympathize with the oppressed don’t really know anything about them. Above all, at this point, Hollywood circles are always worried, first and foremost, about career and status, which can be irreparably damaged by an ill-considered Tweet or comment to the media, much less an unsubstantiated or malicious accusation of sexual misconduct.

As Gervais responded with some asperity and legitimacy to his critics, “How the f*** can teasing huge corporations, and the richest, most privileged people in the world be considered right wing?”