The world held its breath on January 3 after a US drone assassinated Iranian Gen. Qassem Suleimani, who was travelling to Iran on an official diplomatic mission. The threat of a region-wide conflict that could rapidly escalate into a global confrontation loomed large. Leading media outlets and political figures spoke of a “1914 moment,” drawing parallels to the shots in Sarajevo that triggered the eruption of World War I.

But anyone who expected the European powers would protest the United States’ criminal act and oppose the war preparations quickly experienced a rude awakening. 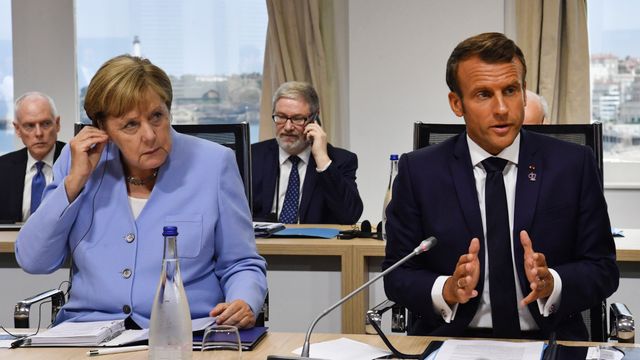 British Prime Minister Boris Johnson rushed to declare that “we don’t lament Suleimani’s death,” while Berlin and Paris stressed that they also had placed Suleimani on their “terrorist lists.” To the extent that they made appeals for “deescalation,” these calls were directed solely at the victim, Iran. Not a single leading European politician condemned the brutal murder, which was ordered personally by the American president, represented a gross violation of international law, and exacerbated the already sharp tensions in international relations.

The contrast with 2003 is obvious. Seventeen years ago, Paris and Berlin condemned the illegal US invasion of Iraq. “Anyone who casts off the legitimacy of the United Nations and puts the use of force above the rule of law is taking a grave risk,” stated French President Jacques Chirac. German Chancellor Gerhard Schröder made similar statements.

The opposition from Chirac and Schröder was by no means principled. Berlin allowed the US to continue using its military bases in Germany, and made clear that it would support military intervention in Iraq if Baghdad failed to bow to Washington’s diplomatic bullying. Nonetheless, their statements encouraged the global anti-war protests, in which millions of people took part.

Why is it the case that today, after the wars in Iraq, Libya and Syria have proven so disastrous, there is no comparable official protest to be heard, even though far from suspending its war preparations, the US is intensifying them?

It has nothing to do with any improvement in transatlantic relations. Since 2003, they have worsened dramatically. Hardly a week goes by without Trump or Secretary of State Mike Pompeo attacking or insulting the erstwhile European allies.

Just last month, the US Congress imposed sanctions to stop the construction of the Nord Stream 2 gas pipeline, which was to link Russia directly with Germany, in what amounted to an affront to an allied country. And the unilateral abrogation by Washington of the Iran nuclear accord, the prelude to the current war provocation, took place in the face of explicit opposition from Germany, France, and Britain.

Despite this, the European powers have joined in with the US war preparations. Any criticism was reserved purely for tactical questions. Like the US Democrats and sections of the military, they accused Trump of acting alone, hastily and without a thought-out strategy, thereby threatening US interests in the Middle East.

But they never call into question the “right” of the imperialist powers to intervene militarily in the Middle East to subordinate the region to their will and in pursuit of their interests. Concepts such as “the right of nations to self-determination,” which the League of Nations and United Nations used for decades as democratic camouflage, have largely vanished from the political lexicon. They are only trotted out when they are needed to support separatist forces against a rival power, such as China or Russia.

Three decades after the dissolution of the Soviet Union, as the International Committee long ago predicted, no new era of democracy has emerged. Rather, the anarchy of capitalism and the obsolete nation state system have produced an exacerbation of inter-imperialist rivalries and a sharpening of class tensions, to which the ruling elites, both in Europe and America, are responding by turning to fascism and war.

Today, the European powers are much more deeply implicated in imperialist crimes than they were in 2003. Germany and France now both have their own troop contingents in Iraq to bring to bear on behalf of their own imperialist interests. The Libyan war of 2011, which overthrew the regime of Muammar Gaddafi and transformed the country into a nightmarish civil war of competing militias, was largely initiated by France. France and Germany also played important roles behind the scenes from the outset of the Syrian war, including by supporting Islamist militias. And in the rapidly escalating conflict in Mali, they are seeking to strengthen the presence of the European imperialists in Africa.

However, they are yet to achieve the long-propagated goal of establishing Europe as a world power through a joint army and common foreign policy capable of going “toe-to-toe” with Washington. Despite huge increases in military spending, the combined military budgets of the European NATO members amount to some $300 billion, less than half of what is spent in the US. The European powers are also deeply divided among themselves. They want to act independently of Washington, but they see no immediate alternative to reaching an accommodation with the United States until they have had the time to rearm.

Specialist foreign policy journals are full of complaints “that Europe’s defence remains virtually dependent on the United States.” “The United States and China increasingly view their relations with the Europeans through the prism of their great power rivalry and deliberately apply pressure to single states to compel them to … take sides,” notes a contribution from the German Council on Foreign Relations (DGAP) titled, “Europe is still defended from Washington.”

“If the Europeans want to avoid becoming the plaything of rival great powers, they must better exploit their power in future, defend their interests more robustly, and make themselves less vulnerable to attack,” concludes the DGAP. The European Union must “learn to conceive of itself as a geopolitical power.”

This requires a militarisation of society and an increase in defence spending far beyond the current officially proclaimed goal of two percent of GDP. Financing this will require savage attacks on the working class. This reveals the second, more fundamental reason for the European powers’ support for the US war drive. They fear that a mass mobilisation against war could unite with the mounting working class struggles against social inequality, threatening capitalist rule.

Workers are seething with anger across Europe. In France, this has been shown with the outbreak of the Yellow Vest movement and the mass strikes against Macron’s pension reform, which still attract hundreds of thousands to the streets after five weeks.

While in 2003, pseudo-left, post-Stalinist and Green forces were able to dominate and maintain control over the anti-war movement, they have since been widely discredited and have shifted into the pro-war camp. None of the establishment parties, whether they describe themselves as left or right, has even stated its verbal opposition to the war drive.

The relapse into barbarism and war can be prevented only by an independent socialist movement of the international working class that unites the struggle against war with the fight against its source: the capitalist profit system. The objective conditions for the development of this mass movement have already ripened. The goal of the International Committee of the Fourth International and its sections, the Socialist Equality parties, is to lead this movement and provide it with a political perspective.