A week after Washington’s drone missile assassination of Iranian General Qassem Suleimani at Baghdad’s international airport, a series of actions by the US and its principal regional ally, Israel, have escalated the drive toward a full-scale war throughout the region.

On Thursday, it was reported that a US drone strike killed or wounded more than 60 civilians in Afghanistan’s western province of Herat, close to the border with Iran. Wakil Ahmad Karkhi, a member of the Herat provincial council, confirmed the mass casualties to TOLO news, saying the civilians were killed and maimed in a US attempt to eliminate the leader of a split-off from the Taliban, known as Mullah Nangyalay.

The Pentagon has made increasingly indiscriminate use of air strikes in an attempt to stave off the Taliban, which controls the largest areas of the country since the regime it headed was overthrown by the US invasion more than 18 years ago. US strikes killed 579 civilians in the first 10 months of last year alone, a third more than in 2018. 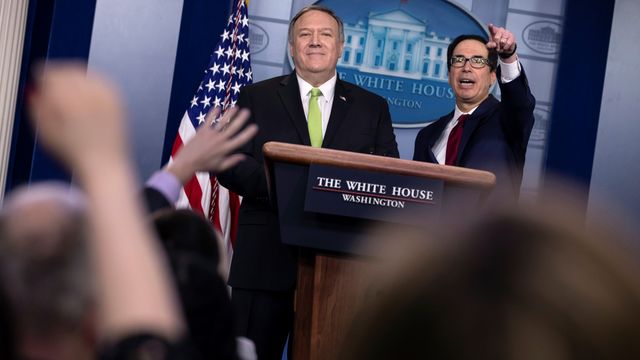 The air strike took place near the Albu Kamal-Qaim border crossing between Syria and Iraq, the same area that was struck by US F-15E fighter jets on December 29, resulting in the deaths of 25 members of the Kata’ib Hezbollah Iraqi militia and the wounding of over 50 more. Those bombing raids, carried out on the pretext of retaliating for a missile attack that claimed the life of a US military contractor, provoked angry protests that breached the security walls of the US embassy in Baghdad on December 31.

Three days later, the US drone strike killed Suleimani, considered the second most important figure in the Iranian state, along with the top commander of the Popular Mobilization Forces, Abu Mahdi al-Muhandis, and eight other Iranians and Iraqis. This assassination attack amounted to an act of war against Iran and a war crime, punishable under both US and international law.

Friday also saw Washington roll out a new round of sanctions against Iran, further escalating the “maximum pressure” economic blockade, tantamount to a state of war, which has been imposed since the Trump administration unilaterally abrogated the 2015 nuclear agreement between Tehran and the major powers in May of 2018.

Announcing the sanctions at a White House briefing, Secretary of State Mike Pompeo and Treasury Secretary Steven Mnuchin claimed that the new measures were being imposed in retaliation for Tuesday’s Iranian missile attacks against two US bases in Iraq, which claimed no casualties and did little damage.

“The United States is targeting senior Iranian officials for their involvement and complicity in Tuesday’s ballistic missile strikes,” Mnuchin said. “These sanctions will continue until the regime stops funding of global terrorism and commits to never having nuclear weapons.”

As recent events have again demonstrated, the principal purveyor of terrorism in the Middle East is US imperialism. As for nuclear weapons, the government in Tehran has repeatedly disavowed pursuing them, while a rigorous inspection regime imposed under the 2015 agreement has consistently shown its compliance with the accord, known as the Joint Comprehensive Plan of Action (JCPOA), which was ripped up by the Trump White House.

In response to US aggression and the refusal of the European signatories to the deal to challenge the US economic sanctions campaign, Tehran has carried out a series of measures reducing its compliance with restraints imposed on its nuclear program. Following the Suleimani assassination, the Iranian government announced that it would observe no more restraints on the capacity of its nuclear operations or their level of uranium enrichment.

The fresh sanctions target the construction, manufacturing, textiles, and mining sectors of the Iranian economy, along with several individual Iranian officials. Significantly, among those targeted for secondary sanctions is Pamchel, a Chinese company that imports Iranian steel.

In a further indication of US imperialism’s aggressive aims in the region, the State Department Friday summarily dismissed a call by Iraqi Prime Minister Adel Abdul Mahdi for Washington to send a delegation to Baghdad to discuss the withdrawal of US troops from the country. In response to the assassination of Suleimani and al-Muhandis, the Iraqi parliament approved a resolution on January 5 calling on the government to expel all foreign forces.

In an initial read-out of a Thursday night telephone conversation between Pompeo and Mahdi, the State Department made no mention of the Iraqi prime minister’s demand, stating solely that the US secretary of state had provided assurances that Washington “will do whatever it takes to protect the American and Iraqi people and defend our collective interests.”

Mahdi’s office, however, released a statement saying he had charged Washington with violating Iraqi sovereignty by bringing troops into the country and carrying out drone operations without the government’s permission. He had asked Pompeo to “send representatives to put in place a mechanism to implement the resolution of the Iraqi Parliament for a safe withdrawal of [foreign] troops from Iraq.”

Mahdi has publicly stated that he was given one-half-hour notice before the US missile strikes against the militia members on the Iraqi-Syrian border, which went ahead despite his request that they be halted. He also stated that he had been scheduled to meet with Suleimani on the morning of his assassination.

Once Mahdi’s side of the conversation became known, the State Department responded with a categorical rejection of Iraq having any say over whether US troops stay or go. The statement said: “Our military presence in Iraq is to continue the fight against ISIS... At this time, any delegation sent to Iraq would be dedicated to discussing how best to recommit to our strategic partnership--not to discuss troop withdrawal, but our appropriate force posture in the Middle East.”

This “force posture” has grown dramatically in recent weeks, with 750 more troops sent to Baghdad to guard the US embassy and another 4,000 paratroopers deployed in neighboring Kuwait as a rapid intervention force.

The statement went on to proclaim the need for a “conversation” about “our financial, economic, and diplomatic partnership,” and to declare Washington’s desire to be “a friend and partner to a sovereign, prosperous, and stable Iraq.”

The reference to a “sovereign Iraq” is laughable under conditions in which the US insists on its “right” to militarily occupy the country against the express decision of its government. As for “prosperous and stable,” the country is still reeling from the devastation wrought by eight years of a US war that claimed over a million lives and demolished Iraqi infrastructure.

The country has been rocked since the beginning of October by mass protests by Iraqi workers and youth against social inequality, unemployment, the failure of essential public services and the corruption of the political regime that emerged out of the US occupation.

While the Suleimani assassination caused these protests to subside as hundreds of thousands took to the streets in protest against the US war crime, they grew again on Friday in Baghdad and the southern cities of Basra, Najaf and Karbala. The demonstrators chanted slogans against Iraq’s ruling elite, as well as against both the US and Iran, demanding that the country not be turned into a “staging ground” for a new war.

Several Iraqi militia groups have called for retaliation against US forces in the country for the murder of Suleimani and al-Muhandis, and two katyusha rockets were fired Wednesday into the Green Zone, the fortified district where the US embassy is located. US forces in the country, reported by the Pentagon to number 5,200, but undoubtedly bolstered by thousands more military contractors and troops rotated in and out of Iraq, have halted their training of Iraqi security forces for fear of “insider” attacks, and are concentrating entirely on their own self-defense.

If Washington imposes a continued occupation against the decision of the Iraqi government, the already unstable regime in Baghdad will be further undermined, while militias such as Muqtada al-Sadr’s Mahdi Army will likely resume operations, triggering a new US-Iraq war.

Meanwhile, with administration officials providing unconvincing and mutually contradictory claims backed by no evidence that the assassination of Suleimani was carried out in the face of an “imminent” threat of attack, the Washington Post reported Friday that US security forces had attempted on the same day to assassinate in Yemen another of Iran’s Islamic Revolutionary Guard Corps Quds Force senior commanders.

According to US officials who spoke to the Post, the US aimed a strike against Adel Reza Shahlai, who was in charge of organizing the limited assistance that Iran has given to Houthi rebels fighting against the Saudi-led assault on the country that has killed nearly 100,000 people and left more than 8 million on the brink of starvation. The US has provided the arms and logistical support for this slaughter.

As the Post reported, the unsuccessful US operation in Yemen raised “questions about whether last week’s assassination of Suleimani” was part of a “broader operation than previously explained, raising questions about whether the mission was designed to cripple the leadership of the Islamic Revolutionary Guard Corps or solely to prevent an imminent attack on Americans as originally stated.”

The report quoted an unnamed senior US official as stating, “If we had killed him, we’d be bragging about it the same night.”

All the developments since Trump’s speech from the White House Wednesday have given the lie to the media claims that the US administration is seeking to “de-escalate,” or taking an “off-ramp” from military confrontation. US military provocations are continuing unabated, and the preparations or an all-out war against Iran, threatening to engulf the entire Middle East and the whole planet, are only intensifying.