“We’ve seen this all happen before, with the Iraq war. We saw how that went. It was a complete tragedy”

UK protesters speak out against war on Iran

WSWS reporters spoke to attendees at Saturday’s demonstrations in the UK against the danger of war in Iran.

“The thought of us fighting against Iran is terrible,” said Carol, who attended the London protest with her friend, Titch.

“Exposing lies is very important … I believe Dr David Kelly [UN weapons inspector in Iraq] was murdered, but our government will never admit that. He said there were no weapons of destruction.” 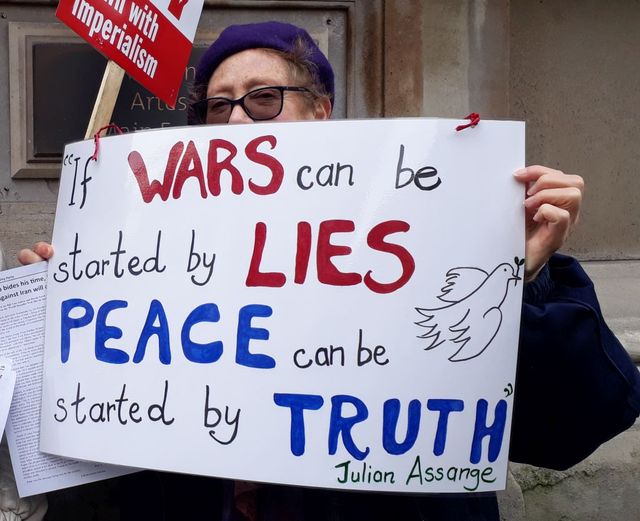 Carol had planned to protest at Belmarsh prison in support of imprisoned WikiLeaks founder Julian Assange, but decided to attend the Iran war protest in London at the last minute. “It’s very dangerous,” she said. “You’ve got the Iranians on the other hand who have come out and said that they did shoot down the passenger plane and that it was a mistake. But either way, the blood is still on Trump’s hands. This was all because of Trump. It was started long before him, but he has kicked it to another level.”

Titch referred to the regime change operation orchestrated by the US and UK in Iran. “It all began in 1953 when we overthrew the Iranian government to strengthen the Shah. In 1979 the Iranian people overthrew him. Ever since then, America and the UK have had it in for Iran. They’re going to do whatever they can to get in there and tear up that country. Everyone knows it.”

Titch was critical of Labour leader Jeremy Corbyn, who was speaking at his first Stop the War protest in five years. “I used to be a massive supporter of Jeremy Corbyn. But something happened to him a couple of years ago. He started to back pedal and he offered a second referendum [on EU membership].

“And then there was the anti-Semitism campaign against him. He has long been pro-Palestine, but instead of saying ‘no’, and drawing attention to the situation with Israel and Palestine, he’s merely been saying, ‘I don’t accept any racism in the party’ and confirmed their narrative. I was screaming at him, saying, ‘What are you doing? We know you’re not an anti-Semite! Why are you backing up their lies?’

“Why couldn’t he just get rid of the Blairites? Didn’t Boris Johnson do something similar in the Conservative Party by expelling 20 rebel MPs over Brexit? He said to them that they’re either on board with this or you’re out of here. Why couldn’t Corbyn do the same? Everybody would’ve stood behind him. There would’ve been an ocean of people absolutely behind him. So, what happened? He had this support. Didn’t he trust us? And if he can’t trust us, should we trust him? I think Labour is finished.

“Now that Corbyn has gone, all of these anti-Semitism slurs have just disappeared. It’s a smear campaign. It’s the same situation with [imprisoned WikiLeaks founder] Julian Assange … This is about free press. This is about human rights. If they can take these rights off Julian Assange today, you can waive your rights away tomorrow. As long as one of us doesn’t have these rights, none of us do. People should be petrified about this.”

Asked her opinion on Labour’s manifesto supporting Trident nuclear weapons, Titch said, “Wasn’t Jeremy Corbyn against that? He just did a 180 degree turn and changed his mind on so many things that so many people supported him on. I don’t think Labour has any future with any of the people they’re going to put in charge. I think we need a whole new system. This whole system needs to be taken down and we need to think of another way.” 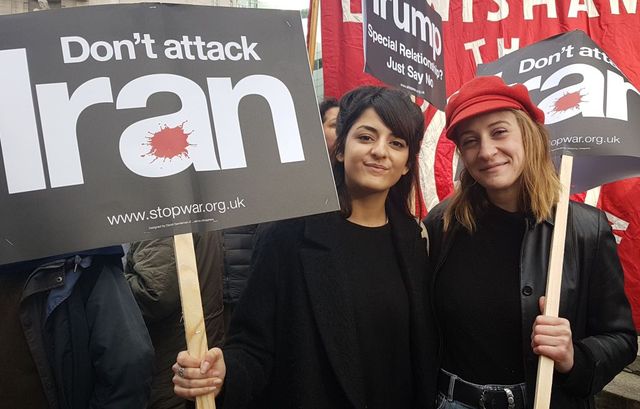 Maddy, who attended the protest with her friend Tia, noted, “We’ve seen this all happen before, with the Iraq war. We saw how that went. It was a complete tragedy.”

Tia said, “The thought of there being more destruction in an area which has just been decimated over and over is really heartbreaking. There’s no chance of any resources being put into recovery, or into making positive change, when war mongering is the only option that our leaders seem to go for.”

“I’m on the demonstration to highlight the persecution of Julian Assange,” Jane noted. “Julian is locked up in Belmarsh prison because he spoke out against war crimes, and the fight to save him is the fight against war as well. I think all the terrible political and environmental issues we’re facing are connected. A consciousness is starting to emerge in the world, where people know there is something terribly wrong and it’s getting to the point where it’s either ‘do or die’. 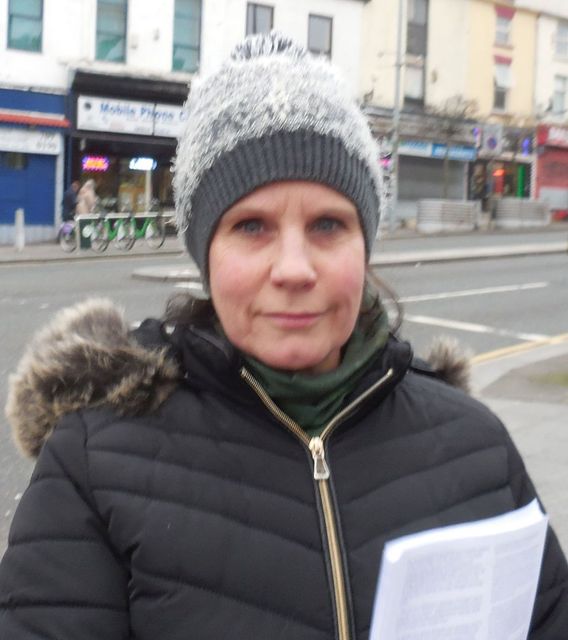 “I think all our problems are caused by a system that sits above and beyond the government, which is about money and power and oppression, with a few very rich and very powerful people in charge.”

Labour Party member Diane noted, “Donald Trump is being impeached and it is a perfect diversion to start a war; historically that is what they do. [Former US President Bill] Clinton did it.” Asked her opinion of the US Democratic Party, she said, “I think ideologically they are the same [as the Republicans]. I think big corporations, big business, is behind what’s going on in the world. It is terrifying … how far it has gone to the right.”

John Kelsey stated, “I’m here today to stop war and because it’s been a US strategy for the last 30 years to dominate the Middle East.” 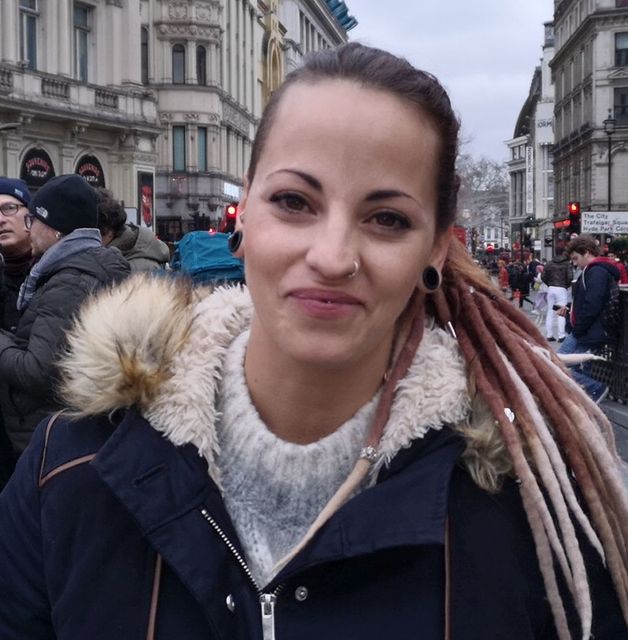 Lucia, a student visiting the UK from Spain, said, “I don’t believe in war with anybody. People need to come together to solve all our problems, including climate change. Trump caused the problem, to create division between other countries to impose American imperialism.”

Deanna remarked, “I am definitely against what Trump is doing. People don’t understand what’s going on, but they need to know.’’

About 100 people demonstrated on the steps of a bombed-out church in Liverpool, St Luke’s, which is preserved in memory of the devastation inflicted during World War Two. 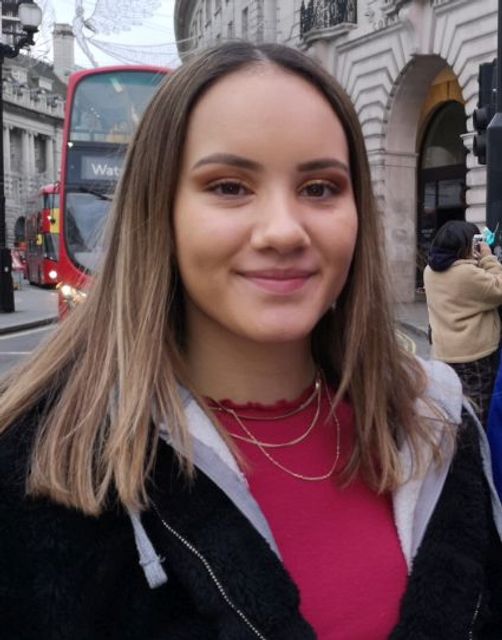 David and Stephen, 16-year-old school students attended to express their opposition to war on Iran. “I am here because I’m against war, I’m against violence,” David explained. “Suleimani was visiting Iraq to sort out peace so it wasn’t good that he was murdered.

“Most people don’t want war. I saw on the media that Iranian people like people in America, they just don’t like the president … I imagine they don’t want to go to war with America. America would probably use nuclear weapons [against Iran], like in World War Two, in Nagasaki and Hiroshima. They didn’t need to drop the bomb. Japan were already on the verge of surrender. America killed Suleimani to prove they have the power to destroy. They want the oil. With how advanced weapons are today, there’s no future if war breaks out.”

“It’s my first rally,” Stephen noted. “I agree with stopping tension and war. It will affect the higher up people, but it affects the working class more and future generations, and ruins things for everyone. They won’t listen to us, what we want.” 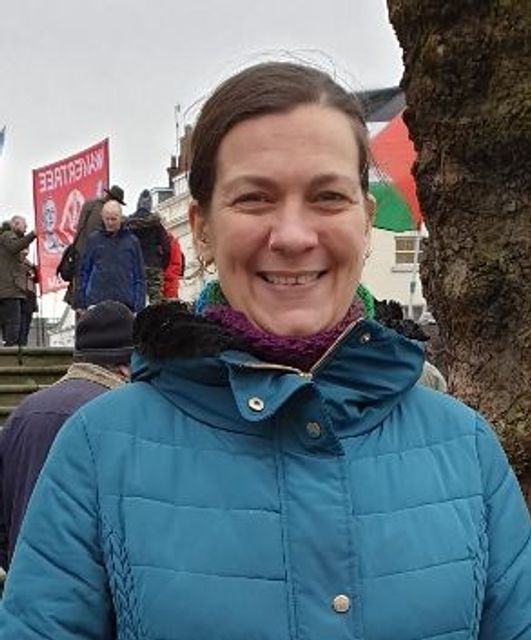 Jennifer, a qualified social worker at a mental health charity said, “I feel strongly that the Iran war is detrimental and I think we’re going into it blindly with America. We can’t just sit back. We all need to get out there and say ‘no’.”

About 60 protesters gathered in Bradford City centre on Sunday. Performing arts student Carol brought her own banner reading, “Don’t Attack Iran.” She said, “Ever since the news first appeared, I was thinking, ‘What do we expect from a president who’s got a mindset for war?’ There are lots of tensions between lots of places which could get out of hand.

“A lot of the attacks in the Middle East are based on lies. They are trying to find excuses to get more power and more money as that’s all that matters to them. Talking to my friends on social media, we are all opposed to what’s happening but feel a bit helpless about what to do.”