In the aftermath of the illegal assassination of Iranian General Qassem Suleimani on January 2, no-one within the Australian media and political establishment has raised the question as to whether the Pine Gap spy base in central Australia played a role in the killing.

If it did so, senior Australian government officials are implicated in war crimes. The failure of the press and the opposition Labor Party to demand an explanation from the government of Prime Minister Scott Morrison is another demonstration of the ruling elite closing ranks behind US imperialism. The Morrison government, with the tacit backing of Labor leader Anthony Albanese, has responded to Washington’s drive for war against Iran by doubling down on its support for US imperialism in the Middle East and internationally (see “Australian government backs US provocations against Iran”).

The Pine Gap facility began operations in 1970, when it was falsely billed as a “space research” centre. In reality it functioned as a major signals intelligence gathering facility for the US, primarily directed against the Soviet Union. Since the end of the Cold War, Pine Gap’s role has expanded further, with additional infrastructure built at the desert site and hundreds of extra staff hired. According to intelligence expert Professor Des Ball of the Australian National University, Pine Gap has been used to intercept long-distance phone calls, satellite transmissions, anti-missile signals, and ballistic missile electronic communications. 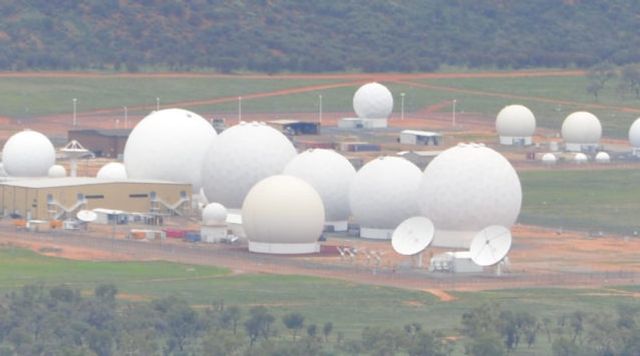 A section of the Pine Gap facility, Credit: Felicity Ruby

In addition to this, American National Security Agency (NSA) whistleblower Edward Snowden revealed in documents published in 2017 that Pine Gap has, over the last two decades, played a critical role in assisting US military operations, including identifying targets for missile attacks and drone assassinations.

An August 2012 NSA “site profile” of Pine Gap stated that it has a special section, known as the “geopit,” equipped with “a number of tools available for performing geolocations.” The document, which used the US intelligence codename “RAINFALL” for the Pine Gap facility, explained: “RAINFALL detects, collects, records, processes, analyses and reports on PROFORMA signals collected from tasked entities,” it stated. “PROFORMA signals” are communications data of radar and weapons systems, such as surface-to-surface missiles, anti-aircraft artillery and fighter aircraft.

This revelation followed the publication of other documents courageously leaked by Snowden in 2013 that showed that Pine Gap played a central role within a NSA program codenamed X-XKeyscore, that collects electronic data on people around the world, permanently storing phone numbers, email addresses, log-ins and user activity. As part of the “Five Eyes” global intelligence network—led by the US and including Australia, Britain, Canada, and New Zealand—Australian intelligence agencies have high-level access to the NSA data, including on Australian citizens.

In July 2013, journalist Phillip Dorling wrote an article for the Age and Sydney Morning Herald, based on unnamed sources, including former Pine Gap personnel. He explained that Pine Gap allowed the US military to process intercepted electronic communications and provide target information to the US military “within minutes.”

Dorling reported that the Pentagon was “critically dependent” on Pine Gap for locating targets marked for extrajudicial execution by President Barack Obama. The facility provides information that “feeds into the United States drone strike program and other military operations,” with “personnel sitting in airconditioned offices in central Australia directly linked, on a minute-by-minute basis, to US and allied military operations in Afghanistan and, indeed, anywhere else across the eastern hemisphere.”

Given this record, it would be unusual if Pine Gap intelligence played no role at all in the US assassination of General Qassem Suleimani, leader of the Quds Force of the Islamic Revolutionary Guard Corps.

Details about the hit operation continue to emerge. According to the New York Times, a US MQ-9 Reaper drone fired two missiles at a convoy of vehicles that was departing Baghdad airport, near an air cargo terminal. The bombing killed Suleimani, as well as Abu Mahdi al-Muhandis, of the Iraqi government-backed Popular Mobilisation Forces, and at least three other people. Iran responded by last Wednesday launching limited missile operations against two US military bases in Iraq, in Erbil and Ain al-Assad airbase in Anbar province.

The ratcheting up of tensions has paved the way for the Trump administration to prepare a devastating war of aggression against Iran, threatening a far wider conflagration engulfing the primary targets of US imperialism, Russia and China (see “Trump bides his time, but the preparations for war against Iran will continue”).

The Australian government is complicit in the drive to war. Canberra has been directly involved in every US provocation in the Middle East in recent decades, including the illegal invasion and occupation of Iraq from 2003. Now the government, again without challenge from within the political establishment, is preparing to line up with an even greater war crime, the US-led “regime change” offensive against Iran.

The assassination of Suleimani underscores the urgent need for the development of an internationally unified antiwar movement. In Australia, among the primary demands of such a movement will be the immediate and unconditional end to the US-Australia military alliance and the closure of all US-connected military and intelligence bases, including Pine Gap.