Tens of thousands of Ontario teachers will join one-day regional strikes this week to oppose the Conservative provincial government’s assault on public education.

Close to 200,000 teachers have been working without contracts since August 31. They are affiliated with four different unions representing teachers at, respectively, elementary and secondary schools, state-funded French-language schools and Catholic schools.

All are bearing the brunt of the Conservatives’ plan to balance the budget by slashing education and other public services, and all are targeted by the government’s “Protecting a Sustainable Public Sector for Future Generations Act.” Passed last November, this law limits pay and benefit increases for teachers, hospital workers and other provincial public sector workers to well below the inflation rate for the next three years. 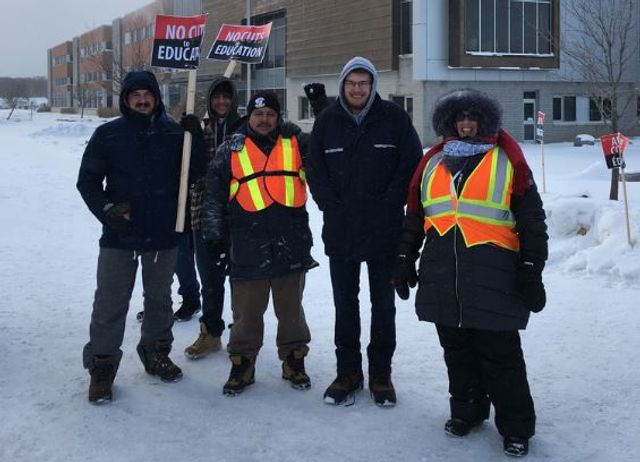 Yet the four teachers unions are doing everything to keep teachers divided. Each is pursuing separate negotiations with the government and a separate bargaining strategy, while claiming that teachers can avoid a head-on clash with Ontario’s right-wing, Doug Ford-led government by limiting job action to work-to-rule campaigns and rotating walkouts.

The 81,000-member Elementary Teachers Federation of Ontario (ETFO) has called for regional walkouts against different school boards for every day this week. The one-day strikes will begin today with walkouts at the Toronto District School Board, the province’s largest, and the York Region District School Board, which serves nine municipalities north of Metro Toronto and is the province’s third largest school district.

On Tuesday, all 45,000 members of the Ontario English Catholic Teachers’ Association (OCETA) are slated to walk off the job.

On Wednesday, high school teachers affiliated with the Ontario Secondary School Teachers’ Federation (OSSTF) will strike for the day at nine school boards, including the Toronto District School Board. The OSSTF held a one-day province-wide strike on Dec. 4, and since then has been holding one day of rotating regional walkouts per week.

Teachers are more than ready to wage a determined struggle against Ford’s attack on public education. In balloting last fall, each of the unions recorded near unanimous strike votes, a reflection of deep-seated opposition to the government’s plans to hike class-sizes, limit pay increases to 1 percent per year for three years, gut education funding, and cut 10,000 or more teaching jobs.

Moreover, there is widespread public sympathy for the teachers, despite a government and corporate media smear campaign attacking them for taking children “hostage” and enjoying lavish pay and benefits.

However the unions, who enjoyed very close relations with the McGuinty and Wynne Liberal governments even as they imposed years of austerity, are determined to prevent an all-out teachers strike and a working-class challenge to the hated Ford government.

The unions’ efforts to divide teachers and contain and smother a mass movement in defence of education and other public services is emboldening Ford and his henchmen. In remarks last week, Ford vowed that the government would never bend in its demand that teachers accept a real wage cut. The Ontario premier also signaled that whilst his government’s preference is to enlist the unions’ support in ramming through concessions, it will criminalize teacher job action, if needed.

Asked at a press conference Thursday if the government was now ready to make good on the threats it made last spring to illegalize teacher strikes, Ford said, “What we really want to do is get a deal.” Legislating teachers back to work would, he claimed, be “the last step.”

Earlier last week Education Minister Stephen Lecce attacked the teacher unions for allegedly failing to make concessions at the bargaining table. “We have systematically done that throughout the fall,” said Lecce, but the unions “have made no movement at all on any of their top matters. They have only made ultimatums.”

This is rich from a government that in the run-up to negotiations announced sweeping cuts in education spending and major changes, including class-size increases in upper grades and the mandatory introduction of e-courses. Through the latter scheme the government plans not just to increase class sizes, but also to open the door for the privatization of course delivery.

Underscoring the government’s threat to use back-to-work legislation to criminalize resistance to its drive to savage public education and impose concessionary contracts on teachers, Lecce added ominously, “There’s still time for a deal.”

The three unions set to strike this week have maintained a deafening silence on the looming threat of back-to-work legislation. This is because the OSSTF, OECTA and ETFO have absolutely no intention of resisting such an anti-democratic assault.

The unions are desperate to reach an accommodation with the government. But should that prove impossible, they will order teachers to comply with the Tory government’s strikebreaking legislation, just as public and private sector unions across Canada have done time and again for decades.

The teachers’ unions have close ties to the Ontario Federation of Labour (OFL), which has worked tirelessly since Ford came to power to contain and suppress working class opposition. Indeed, the OFL hasn’t even dared called a mass demonstration against the Tory law that will cut the real wages of a million public sector workers each year for the next three years.

Through its “Power of Many” campaign, the OFL is working to channel workers’ energies behind a campaign to elect a “progressive” government in 2022, i.e., a pro-corporate, pro-austerity government formed by the Liberals and/or New Democrats. OFL President Patty Coates, who now heads the campaign, is a long-standing OSSTF member.

An all-out strike by elementary and high school teachers across Ontario would be welcomed by students, parents and working people as a whole, and could quickly become the catalyst for a broader working class upsurge, in Ontario and across Canada, against austerity, contract concessions, anti-strike laws and the ruling elite’s broader campaign to criminalize social opposition.

That is precisely why the teachers unions, the OFL and Unifor are so determined to prevent it. For decades these pro-capitalist organizations have been complicit in the assault on the working class. The chief concerns of the bureaucrats who lead them are defending their six-figure salaries, their close partnership with the federal Liberal government, Ontario Liberals and other sections of the political establishment, and their various positions on government and tripartite advisory boards.

If they are to prevail, teachers must take control of their struggle for better wages, smaller class sizes, and better funding and equipment for public education into their own hands. Independent action committees must be formed to coordinate province-wide strike action, appeal for solidarity strikes and protests by educators across Canada and internationally, and mobilize the full power of the working class in a political struggle to bring down the Ford government—the only way to halt its austerity drive.

Above all, teachers must understand that their struggle is political and brings them into headlong conflict with their entire capitalist establishment. Ford’s Tories may be waging the most savage assault on public education in over two decades, but the Liberals were just as eager to enforce austerity for schools and other public services when they held power. Moreover, Ford’s assault on teachers is the spearhead of a broader offensive on working people being mounted by the ruling elite at all levels of government, so as to boost corporate profits and obtain the financial resources needed to provide Canada’s military with new fleets of warships and warplanes. This includes the NDP, which is propping up Trudeau’s Liberals at the federal level.

The defence of public education is possible only by rejecting this agenda and adopting a socialist and internationalist program to guide the struggle for a workers government that would use society’s vast resources to meet social needs rather than swell corporate profits.