The World Meteorological Organisation (WMO), the US space agency NASA and the National Oceanic and Atmospheric Administration (NOAA) have all independently concluded that the past decade, 2010 to 2019, experienced the hottest ever recorded global surface temperatures. Each decade since the 1960s has been hotter than the previous one.

The five years, 2015–2019, were the warmest. 2019 was the second hottest year—surpassed only by 2016, when the El Niño weather pattern drove temperatures to the highest level yet registered. The average surface temperature has risen by 1.1 degrees Celsius since the pre-industrial era. Among credible scientists, there is no dispute that the cause is the long-term impact of human emissions of carbon dioxide and other greenhouse gases into the atmosphere.

WMO Secretary-General Petteri Taalas commented: “The year 2020 has started out where 2019 left off—with high impact weather and climate-related events. Australia had its hottest, driest year on record in 2019, setting the scene for the massive bushfires, which were so devastating to people and property, wildlife, ecosystems and the environment. Unfortunately, we expect to see much more extreme weather throughout 2020 and the coming decades, fueled by record levels of heat-trapping greenhouse gases in the atmosphere.” 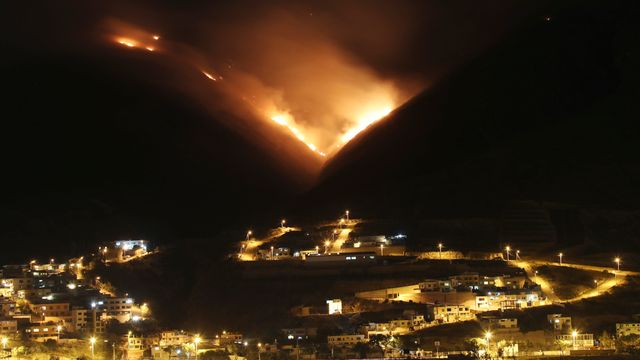 A wildfire burns on Casitagua hill, north of Quito, Ecuador, Wednesday, Jan. 15, 2020. While the fire is not threatening homes, the smoke is reaching the north of Quito. (AP Photos/Dolores Ochoa)

Hundreds of millions of people around the world are suffering the impact of human-induced climatic change. In 2019 alone, scientists believe that global warming was the main contributing factor to more intense heat waves, droughts and fire, more regular and severe tropical storms and flooding, increased acidification of oceans, accelerated permafrost melt, the thinning of ice sheets in the Arctic and Antarctica, and the steady rise in sea levels.

What action is required to stem global warming is well known. Emissions must be drastically reduced through the wholesale deployment of non-carbon alternatives to fossil fuels, combined with the deployment of verified means of capturing existing carbon from the atmosphere. If they are not, the WMO’s Taalas commented, “On the current path… we are heading toward a temperature increase of 3 to 5 degrees Celsius by the end of the century.”

Yet, for all the proclamations by corporations and governments that they accept the known dangers and the need to reduce the use of fossil fuels, carbon emissions rose to the highest ever level in 2019, according to estimates by the Global Carbon Project. Even though emissions from coal declined—while still accounting for 40 percent of the global total—overall emissions increased through the use of oil and natural gas.

Immense rage is building up internationally, especially in the working class and among the world’s youth, over the sheer recklessness and criminality of those in power, who have refused to implement the policies necessary to avoid catastrophic global warming.

However, the understanding that must inform the political struggles of the coming months and years is that this corporate and government inaction and indifference stem directly from the irrationality of the capitalist system. A social system that is based on the private ownership of the means of production, the subordination of production to the accumulation of profit, and the division of the globe into rival nation-states, i.e., the capitalist system, is incapable of the coordinated international planning and allocation of resources necessary to address the climate crisis.

Protest appeals to the moral conscience of political and corporate leaders have, in the blunt assessment of teenage climate change activist, Greta Thunberg, “achieved nothing.”

Instead, governments internationally, spearheaded by the Trump administration in the United States, are insisting that continued, and even expanded, fossil fuel use is essential for the competitiveness of their industries and their “national interest.”

Just 100 transnational private and state-owned energy corporations—which generate vast returns for the wealthy elite—are responsible for 71 percent of all emissions. The narrow, short-term dictates of shareholder return, or cheap energy for industry, are given priority over the long-term interests of humanity as a whole.

In Australia, where the fires burning across large parts of the continent have starkly brought home the realities of climate change, Scott Morrison, the country’s prime minister, flatly asserted on the weekend: “I won’t put up a carbon tax. I won’t put up people’s electricity prices and I will not wipe out a resources sector which millions of Australians depend on, particularly regional Australians.”

Morrison—a particularly crude defender of the fossil fuel industry—has no concerns for “millions of Australians,” but for the energy corporations that generate billions of dollars in profit from Australia’s status as the largest global exporter of coal and one of the largest producers of natural gas. As for taxation, successive governments in Australia, paralleling global processes, have slashed the rate of tax on both corporations and personal income. Vast wealth that could have been used for socially useful purposes—including low-cost renewable electricity generation—has been channeled to the top 10 percent, and especially the top 1 percent of the population.

As recent weeks have demonstrated in Australia, the emergency and health services needed to prepare for and respond to increasingly severe disasters are under-resourced and under-staffed, while a tiny proportion of the population has accrued obscene amounts of personal wealth.

Moreover, amid escalating corporate struggles for markets and profit share, nation-states are channeling ever greater resources into war preparations—not the reduction of emissions. Military spending in 2018 increased by another 2.7 percent, to at least $1.8 trillion, most of it by the United States, followed by China, the European powers, Saudi Arabia and India, countries that are also responsible for the highest carbon emissions.

The military apparatus itself is a significant factor in emissions. To sustain its vast global operation of predatory wars and intimidation, the fuel use by the US military alone would have ranked it as the world’s 47th largest emitter in 2017 if it were counted as a separate nation.

On January 3, the World Socialist Web Site perspective, “The decade of socialist revolution begins,” presented a concise and objective summation of the political challenges of the coming period. Those who defend the historically outmoded capitalist order are presiding over the descent toward a catastrophic great power war, the destruction of hard-won democratic rights, the degradation of the environment, unprecedented levels of social inequality and unnecessary deprivation and suffering.

The international working class is the only social force that can bring an end to capitalism and usher in a socialist society that prioritises human need, not private profit. Everything depends, however, on the mass struggles of workers, which are already unfolding in country after country, becoming imbued with socialist consciousness and unified into a worldwide movement for revolutionary change. The efforts of all workers and youth who recognise the gravity of the world situation and the crisis posed by climate change must be devoted to this task.