“Every punishment, which does not arise from absolute necessity, says the great Montesquieu, is tyrannical.” Cesare Beccaria, On Crimes and Punishments

The trial of film producer Harvey Weinstein, on five charges of sexual assault involving two women, is currently underway in New York City. The jury of seven men and five women was seated last Friday. Opening arguments will be offered on Wednesday.

On Tuesday, the New York Times continued its vengeful and prejudicial campaign against Weinstein. In “Harvey Weinstein’s Dark Days,” the Times gloated over the former film producer’s misfortunes and celebrated his virtual destruction. 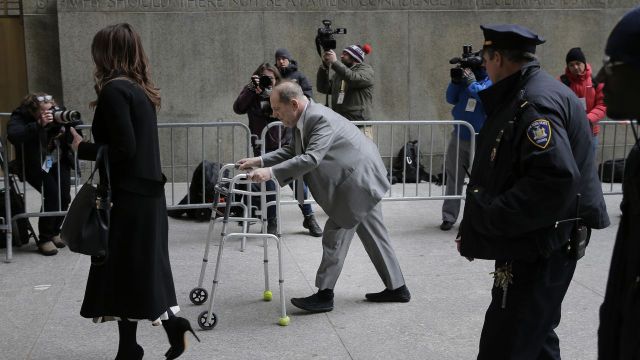 Reporters look on as Harvey Weinstein, center, arrives to court after a break on the first day of jury selection of his sexual assault trial, in New York, January 7, 2020 [Credit: AP Photo/Seth Wenig]

The article observed, “Manhattan prosecutors say Mr. Weinstein is a serial sexual predator who should get the maximum penalty of life in prison. … His numerous accusers have said that he deserves no public sympathy and that his current misfortunes are the inevitable result of his serial mistreatment of women over the years. Plenty of others would agree: Mr. Weinstein has become a global symbol of the #MeToo movement and the behavior endured by women.”

And further: “In the wake of the allegations, Mr. Weinstein, the once formidable Hollywood producer, lost his marriage, his livelihood and a large part of his fortune. Now, according to those who have stuck with him, he is anxious—even petrified—about losing his freedom, too. ‘He’s utterly isolated,’ said Jeffrey Lichtman, a New York lawyer who recently befriended Mr. Weinstein. ‘And he’s terrified, especially of going to prison.’”

His health, according to the Times, “has deteriorated sharply.” A friend indicated that Weinstein “was not well and has diabetes and hypertension. In December, he underwent a bilateral laminectomy, a back surgery his representative said was needed to repair his spine after a traffic accident in August.”

Weinstein has not been convicted of any crime, although the current trial, presided over by a judge who has already made clear his intense hostility to the producer, is intended to rectify that situation. A great deal of pressure is being brought to bear on the proceedings and its participants. After investing immense resources in the #MeToo campaign over the past two years and more, the Times and those sections of the establishment aligned with the Democratic Party need a Weinstein conviction both to ratify what has already been done—the ruin of dozens of careers and the undermining of elementary democratic principles, including the presumption of innocence and the right to due process—and to prepare further attacks.

The Times is involved in this cynical business for political reasons. One of the newspaper’s aims is to whip up its primarily middle class readers into a frenzy about Weinstein to divert attention from the social crisis, the looting of the economy by the rich and the drive to war. The Democrats, picking up from where they left off in 2016, intend to turn the 2020 election into a campaign about gender and race. Everything must be done to keep the issue of social inequality out of the public discourse.

There was a time in the US when the sort of bloodthirstiness we see directed against Weinstein would have provoked at least a significant handful of courageous editorialists and legal minds to respond. Now, there is almost nothing of that sort. The same social-cultural processes and atmosphere, the overall erosion of democratic sentiment in upper middle class and ruling circles that have made possible “shock and awe,” Abu Ghraib, “black sites,” “enhanced interrogation,” “kill lists,” thousands of illegal drone strikes and the assassination of Qassem Suleimani, all that occurring with scarcely a murmur of protest from the media and academia, have also permitted the public evisceration of Weinstein to proceed.

In their treatment of the Hollywood producer’s case, the Times and other outlets are doing their best to create a lynch-mob mentality. They deliberately appeal to the most shallow, most rancorous and basest instincts. For example, Tuesday’s “Dark Days” article is vindictive enough, but the vast majority of comments it has generated are even more remorseless. Out of more than 120 comments, only one or two indicate the slightest compassion or democratic sensibility.

These are typical: “He has reaped what he has sown and deserves no sympathy.” “Whatever suffering comes to him he has brought it on himself.” “He will spend his final days in prison and without friends.” “His so-called ‘dark days’ are far better than he deserves and hopefully things will get a whole lot more unpleasant for him.” “Seeing Weinstein crippled over, hobbling along with his walker, does not elicit pity, but a deep-seated disgust.” “So, Weinstein feels ‘isolated and terrified.’ Good.” “I assume his defense will be that he is a broken man and can no longer physically be a threat to women. Lock him up.”

A number of readers took the Times to task for even going through the motions of representing Weinstein’s side of the story. “He deserves no pity,” writes one commentator, “I’m fuming.” Another says, “Do we really need to ‘both sides’ the abuser who is poor Harvey Weinstein”? A third: “The text reads as a writer trying to portray balance to cover up his real feelings of empathy and compassion for this poor man. … It’s not what I expect from the New York Times.”

It’s difficult to suppress one’s revulsion in the face of such vengefulness, encouraged by the Times and the rest of what has become almost universally a “gutter media” in America. And the various attempts to justify the pitiless comments on the basis of “populist” claims that Weinstein deserves what he gets because of his wealth, his “entitlement” and his belonging to the “one percent” are phony through and through. The annihilation of Weinstein, the undermining of elementary legal principles and the triumph of witch-hunting will only, like all such attacks, operate against the working class and the poor in the end.

In a comment published in Newsweek in December, “How the Media Is Keeping Harvey Weinstein from Getting the Fair Trial He Deserves,” Weinstein’s lead attorney Donna Rotunno commented that she did not seek sympathy for her client. “Nor do I expect it,” she went on. “I do expect, however, that he receives due process and a fair trial. The fact that this needs to be argued should raise concern for us all. There is nothing preventing you from being next. Long before you stand before a judge, the claims of a few can upend your life and destroy your reputation. …

“I’m not debating any details or refuting any claims in this column; I will do that in court. I simply ask that the foundation of laws and civil rights that this country was founded on not be crushed by the emotions of the public. Let the trial run its course, let the exculpatory emails be brought to light and let the facts be sorted out in a court of law. The truth will come out through evidence and testimony. The jury will render its verdict. Only then can society cast its judgment.”

Anyone who stops to think about it will realize there is a staggering contradiction in the treatment of Weinstein and the ability of genuine criminals to walk the streets of Washington and New York and sit in corporate boardrooms across America. But this is not the result of oversight, or a temporary misunderstanding. The Times and their accomplices declare war on Weinstein precisely to draw hysterical petty bourgeois public opinion away from the malignant social ills and vast atrocities.

Where are the prosecutions of Bush, Cheney, Rumsfeld, Obama, Hillary Clinton, John Brennan, Gina Haspel and the rest, responsible for the deaths of millions in the Middle East and Central Asia, for systematic torture, abuse and misery, for the virtual obliteration of entire societies? The Times editors themselves have a vast quantity of blood on their hands for their role in preparing and facilitating the wars in Afghanistan, Iraq, Libya and Syria. Who are they to lecture anyone?

And when will executives from BP, General Motors, Boeing, Wells Fargo and the rest of the banks, Pacific Gas & Electric Co. or Shell Oil face their day of reckoning in court? Where is their “karma”? When will they “get what they deserve”?

All of these major, dastardly criminals unpunished, but Harvey Weinstein…!