Hundreds of thousands of protesters filled the streets of Baghdad Friday in a mass demonstration demanding the immediate withdrawal of US troops from the country.

Waving Iraqi flags and chanting “Get out, get out occupier,” and “Death to America,” the crowds expressed the immense popular anger that has built up over decades against the murderous role played by Washington in Iraq. Some carried signs threatening armed resistance, while others wore white capes, symbolizing burial shrouds, indicating their willingness to die in such a struggle. 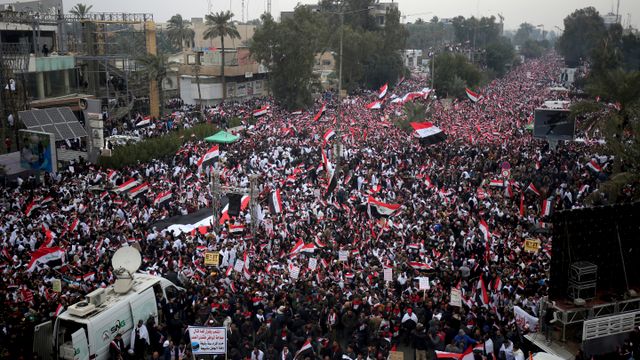 Miriam, an 18-year-old high school student participating in the demonstration, told Al Jazeera: “I’m here today to protest against the United States occupying our lands. We want to liberate our country from these chains of oppression.”

The demonstration was called as a “million-man-march” by the populist Shia cleric Moqtada al-Sadr, undoubtedly in an attempt to provide a controlled release for rising popular anger. Sadr, who leads one of the most powerful blocs within Iraq's corrupt bourgeois government, is trying to balance between Washington and Tehran and finds his position increasingly challenged by a revolt from below.

Among the hundreds of thousands who marched were countless workers and youth whose entire lives have been shaped by US imperialism’s crimes, from the first Persian Gulf War of 1990-1991, through a subsequent regime of draconian sanctions, which US officials themselves acknowledge claimed the lives of half a million Iraqi children, to the war of aggression launched in 2003 based on lies about weapons of mass destruction.

The World Socialist Web Site described the impact of that war as “sociocide,” i.e., the murder of an entire society. The death toll from the US intervention was estimated at one million, while millions more were driven from their homes. One of the most advanced societies in the Middle East in terms of health care, education and other basic social indices was reduced to rubble. The conditions of life in Iraq are still shaped by the “shock and awe” inflicted upon the country by the US military.

The bitter resentments over this long and bloody history have been reignited in the wake of the US drone missile assassination of Iran’s Gen. Qassem Suleimani, along with Abu Mahdi al-Muhandis, a prominent member of the Iraqi government and leader of the Popular Mobilization Forces, the predominantly Shia militias that are part of Iraq’s armed forces.

The killing of Suleimani and al-Muhandis, along with eight other Iraqis and Iranians, at Baghdad’s international airport on January 3 constituted both an unprovoked act of war against Iran and a war crime.

While bringing the world to the brink of a catastrophic new war in the Persian Gulf, the assassinations were a brazen violation of Iraqi sovereignty. Trump administration officials have repeated baseless and until now wholly unsubstantiated charges that they carried out the murders to preempt a supposed “imminent attack” on US forces or interests in the Middle East. The reality is that Suleimani was in Baghdad at the invitation of Iraq’s interim prime minister, Adel Abdul Mahdi, to discuss attempts to ease regional tensions between Iran and Saudi Arabia.

The Iraqi parliament convened two days after the assassination and passed legislation demanding the expulsion of all US military forces from the country. Abdul Mahdi on January 9 formally requested that Washington send a delegation to Baghdad to negotiate the terms a US withdrawal.

The response was one of anger and imperialist arrogance. Trump declared that the US had built a “very expensive air base” in Iraq and that “We’re not leaving unless they pay us back for it.”

He threatened punishing sanctions, which the Treasury Department and other agencies have already drawn up. Washington also told Baghdad that it would close off access to Iraq’s $35 billion account held at the Federal Reserve Bank in New York—a lasting legacy of the US military conquest of the country—imposing a financial blockade that could collapse its economy and impose even greater suffering upon its population.

The State Department said it would send a delegation to Iraq only to discuss “how best to recommit to our strategic partnership—not to discuss troop withdrawal, but our right, appropriate force posture in the Middle East.”

Trump reiterated this standpoint after meeting with Iraqi President Barham Salih at the World Economic Forum in Davos, Switzerland on Wednesday. Asked about the threatened US sanctions, Trump replied, “We’ll see what happens, because we do have to do things on our terms.” Salih, an opportunist political creature of every regime since the start of the US occupation in 2003, came under intense fire for agreeing to meet with Trump, with many warning him not to return to Iraq.

These events have laid bare the essential neo-colonial character of Washington’s intervention in the Middle East over the past three decades, carried out under the shifting banners of a “war on terrorism,” “human rights,” “weapons of mass destruction” and defense of “democracy.”

The roughly 6,000 US troops now in Iraq were brought in on the pretext of defeating the Islamic State of Iraq and Syria (ISIS), Washington’s own Frankenstein monster, a jihadist militia that grew out of the Al Qaeda-linked forces the US and its allies unleashed in their regime-change war in Syria, which then turned eastward, overrunning roughly a third of Iraq in 2014. The “war against ISIS” resulted in the devastation of Mosul, previously Iraq’s second city, along with cities and towns throughout Anbar Province, leaving tens of thousands dead and hundreds of thousands homeless.

Now US military commanders are saying ISIS is no longer a serious threat, and that Iran and Iranian-influenced Iraqi Shia militias, which carried out much of the fighting against ISIS, are the principal enemies in Iraq. There have been reports of discussions between US officials and Iraqi Sunni politicians aimed at fostering a separate Sunni Iraqi state that could host US bases.

What is involved is a new imperialist carve-up of the Middle East. Trump has expressed the criminal character of this operation most openly in Syria, where he has ordered US troops to “take the oil,” occupying the oil and gas fields of northeastern Deir Ezzor province, while suggesting bringing in a major US energy conglomerate to loot the country’s resources.

Underlying this turn to unabashed imperialist banditry lies the failure of the multiple US military interventions and regime-change operations in the Middle East to achieve Washington’s strategic aims. It is now turning toward a region-wide war against Iran as part of its buildup for “great power” confrontation with China, attempting to use military force to establish a chokehold over the energy resources upon which the Chinese economy depends.

The uprising of the Iraq masses has been expressed not only in the mass demonstration against the US occupation, but in the continuous protests against social inequality, unemployment and regime corruption that have shaken the country since last October, leaving some 600 dead.

These struggles are unfolding as the country approaches the centenary of the Great Iraqi Revolution of 1920, when the Sunni and Shia populations of Iraq united in a heroic struggle against occupying British forces that had carved out a colonial possession from the carcass of the defeated Ottoman Empire.

British imperialism retaliated with unrestrained brutality, employing poison gas and terror bombings against an impoverished population, costing the lives of close to 10,000 Iraqis. “I am strongly in favor of using poisoned gas against uncivilized tribes [to] spread a lively terror,” Winston Churchill, then minister of war, declared.

Formal independence and more than a half of a century of bourgeois nationalist rule in Iraq and throughout the Middle East have failed to either free the region from imperialist oppression or meet the fundamental social and democratic demands of the masses of working people. Now, the methods touted by Churchill are returning with a vengeance.

The mass protests in Iraq, together with the struggles of workers and youth in neighboring Lebanon as well as Iran, which are unfolding amid a global eruption of class struggle, point the way forward.

It is now seventeen years since the mass demonstrations against the 2003 Iraq war, involving millions of people in the US, Europe, and internationally. There is enormous opposition to war among workers and youth throughout the world. This opposition must be connected to the expanding wave of class struggle and protests against social inequality.

It is the struggle of the working class against capitalism, in Iraq, the broader Middle East and internationally, that provides the only answer to the reimposition of colonialism and a new imperialist world war. This emerging mass movement must be armed with a socialist and internationalist program to unify workers across the globe in the common struggle to put an end to the source of war and social inequality, the capitalist system.

Uprisings in the Middle East