“People are waking up and if we ‘yellow vests’ succeed, and if Julian Assange gets out, something huge will have happened which could prevent many wars”

Corinne was one of around 100 “yellow vests” who came from France to take part in Saturday’s rally in support of Wikileaks publisher Julian Assange outside London’s Belmarsh prison. The WSWS asked her about her experiences on the day and the reason why the French “yellow vests” have placed such great emphasis on the fight to free Assange and prevent his extradition to the United States on Espionage charges. The following is Corinne’s response.

Saturday’s rally was an action first suggested the last time we came here on October 20 to protest outside Westminster Magistrates Court. We really wanted to continue putting on the pressure before the hearings begin in February. So we thought that a month before the first hearing was a good time for a big protest. 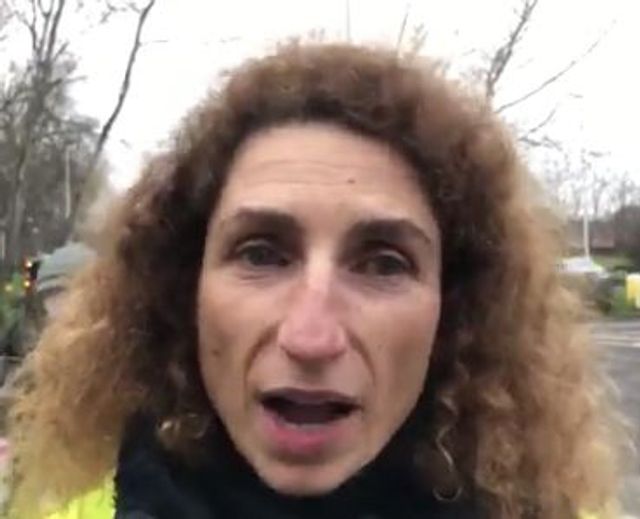 We organised in our group to rally the troops and made a national appeal to all those that wanted to come or could come to support Julian. When we demonstrated in front of the prison at Belmarsh there were people from all over France—from Nice, Marseille, Montpellier, from the coast near Nantes and from near Nancy, Paris and Lille. We even had some Belgians who responded to our appeal and who came by their own means of transport, as well as Germans who came to join us.

We put on two coaches from Paris for the French. We came on the ferry, not the Channel Tunnel, so we travelled during the night and arrived in the early hours of the morning as the English participants were arriving at 8:30 a.m. We had a relaxed breakfast. Then we joined them in front of the prison. We stayed and protested until around 7:30 p.m.

There were two film directors there with us, as well as a writer called Philipe Pascot. There was another writer who knew the Assange case very well, Viktor Dedaj.

There were people there from all walks of life—workers, people who were facing unemployment, artists, a variety of different jobs. There were some Italians who joined us as well. In total there were around 94 French people with us on the two buses, and a few people that arrived by air and by train, as well as some French people who are currently living in England. There were a couple of Brazilians there too who live in England.

Many people drove past the prison, so we did some leafleting at the traffic lights. Many of the “yellow vests” stood in front of the vehicles with large banners to draw their attention. A lot of motorists stopped to take our leaflets and a lot of them tooted their horns when they saw the “yellow vests” and the Assange banners.

I think among us “yellow vests,” we have really understood the importance of what’s happening. It goes far beyond even the life of Julian Assange and freedom of the press. If they extradite him it will have enormous consequences. But if we manage to free him it will be a really amazing thing. The effect of WikiLeaks having revealed all that it has to the general public was enormous because people were able to become aware of all the state lies, all the wars that were provoked out of self-interest, the atrocities, the corruption. People are waking up bit by bit, and if we “yellow vests” succeed, and if Julian Assange gets out, something huge will have happened which could stop and prevent many wars.

I think that the only way [to secure Assange’s freedom] is to mobilise citizens, because the problem is that governments are under the yoke of the United States. In the UK we can see very well what is happening on a judicial level. It seems there is no longer any real justice, and if there is no justice, how could he be saved by the law?

The only solution is to come out onto the streets and protest. It is the only way, and so we need to bring together different groups.

One of our big problems is that sites like yours, and other independent sites, write about Julian Assange, but in the mainstream media there is near total silence. There are people who don’t know anything at all about Assange, who don’t even know WikiLeaks. There are people who are somewhat aware of the Assange case, but they don’t know that he is imprisoned in Belmarsh, a maximum-security prison. He is a journalist who was venerated, but now everyone has abandoned him. It is unthinkable. We are supposed to live in a democracy, but this is absolutely not a democracy.