The death toll has risen to 38 after a 6.8-magnitude earthquake shook Turkey’s eastern province of Elazığ on Friday evening. With search and rescue operations continuing, the Turkish Disaster and Emergency Management Presidency (AFAD) is reporting more than 1,600 injured.

Since Friday, over 700 aftershocks have shaken the region. In a statement on Sunday, the AFAD stated that an initial analysis of 1,521 buildings found that only 347 were not damaged. Seventy-six buildings were destroyed and 645 were heavily damaged. 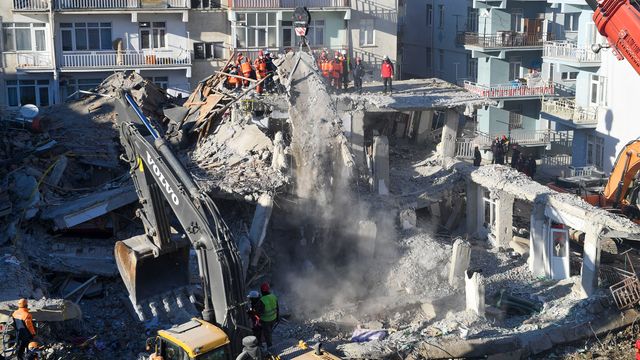 The closest residential area to the earthquake’s epicenter is the Sivrice district of Elazığ. A magnitude 4.3 earthquake also hit neighboring Malatya province on Sunday morning.

More than 420,000 people live in Elazığ, but analysts said that if the earthquake had occurred closer to residential areas there would have been an even greater disaster due to the lack of secure buildings.

Turkey is an earthquake-prone country, sitting atop two major fault lines, and scientists have repeatedly called on the government and local administrations to take due precautions, especially after a horrific earthquake in 1999 killed more than 17,000, according to an official count.

However, there are no serious preparations, either for İstanbul or cities in the rest of the country. The government has no plan outside of calling on people to keep calm. Inevitably, the working class pays the heaviest toll in lives as cheap, vulnerable houses and buildings collapse.

Last Friday’s disaster had long been predicted. Among others, Naci Görür, a well known professor of geology, told CNN Turk last October that an earthquake was likely to hit the Sivrice district of Elazığ.

After the earthquake in Elazığ, he explained on his Twitter account that he had prepared a project with other scientists against the coming disaster, but it was rejected by official institutions. He asked, “In fact, it is well known that earthquakes will happen sooner or later on every fault line. Why are those places not taken care of when there is no earthquake?”

An earthquake victim who spoke to the daily Cumhuriyet after the disaster, Hakan Tahşi, said he has been living in a building named Dilek Sitesi, built in 1987 and consisting of 28 apartments. It was destroyed and at least eight residents were killed.

Tahşi said, “Our building was already rotten… The municipality knew it was vulnerable to earthquakes.” However, those living in the building, as with most working people, could not afford to change their residence or find a secure building.

The chairman of the Chamber of Geology Engineers, Hüseyin Alan, also blamed officials for the deaths in Elazığ and Malatya, saying the damage was a result of “unhealthy and illegal construction, rapid and low quality urbanization based on rent, and lack of legal arrangements to eliminate problems.”

Many residential areas in Turkey are built on active fault lines, disregarding scientific standards in urban planning. According to Alan, besides İstanbul, 18 city centers, including Aksaray, Bolu, Sakarya, Yalova, Bursa, Balıkesir, Manisa, İzmir, Aydın, Denizli, Erzurum, Kahramanmaraş, Hatay, Hakkâri, Muğla, Eskişehir, Kütahya and Bingöl, along with more than 80 town centers and 502 villages, are “on the lines where active faults with high potential to produce earthquakes pass.” In a major earthquake, buildings there would be “destroyed,” he said.

Though this reality threatens the lives of hundreds of thousands, if not millions, of people across Turkey, President Recep Tayyip Erdoğan and his ministers responded only by cracking down on criticisms, especially those raised on social media. On Saturday, Erdoğan visited the disaster zone and condemned what he called a “smear campaign” on social media by those questioning the Turkish government’s preparations for earthquakes.

“Do not listen to rumors, do not listen to anyone’s negative, contrary propaganda, and know that we are your servants,” Erdoğan said. A prosecutor in Ankara subsequently opened an investigation into social media posts about Friday’s quake.

As always when social inequality and the government’s class character are raised, the opposition parties joined the government to suppress opposition to obvious official negligence. The Kemalist Republican People’s Party (CHP) leader Kemal Kılıçdaroğlu said, “In an environment where we have such a painful day, we have to stay away from such strict political polemics,” while the far-right Good Party leader Meral Akşener called for “unity and solidarity.”

Outrage erupted on social media after the head of the Turkish Red Crescent, Kerem Kınık, called on people to make ten-lira donations for people impacted in the region. Thousands of people responded to a hashtag asking, “Where did the earthquake tax go?” Since 1999 there has been a national tax, widely known as the “earthquake tax,” supposedly to protect the population from earthquakes. But after every quake, it emerges that no serious measures have been taken.

As a result, an earthquake in the eastern province of Van in 2011 left more than 600 dead and nearly 4,200 injured. After this disaster, then-Finance Minister Mehmet Şimşek was asked to account for the 46-48 billion Turkish liras (US$8.1 billion) in earthquake taxes collected since 1999. He said the government spent it on double highways, health care and education instead of preparing for earthquakes.

The Elazığ disaster has again exposed government spending as utterly inadequate. In reality, the government does not grant TOKİ housing units to earthquake victims as a gift, but sells them for a profit. Similarly, “urban transformation” has long been a mechanism, especially in İstanbul, to drive working class residents from the city center and build luxury residences for the affluent. Its purpose is not to protect residents from earthquakes, but to boost profits for construction firms and enrich the top layers of society.

Since the 1999 quake, which according to some unofficial estimates killed over 50,000 people and left more than 250,000 people homeless, there has been no real “urban transformation.” Instead of rebuilding insecure buildings, especially in densely populated poor districts, the Turkish government and municipalities have abandoned the workers to their fate.

Figures on an anticipated earthquake in İstanbul underscore the scope of the danger. According to Boğaziçi University’s Kandilli Observatory and Earthquake Research Institute, a 7 magnitude earthquake in the city of more than 15 million people would “heavily damage” between 6,000 and 40,000 buildings, while about 150,000 would become “unserviceable.” More than 500,000 residences are in danger and at least 1.5 million people would have problems finding shelter.

The Elazığ earthquake has again exposed the contempt of the ruling elites for safety precautions essential to the survival of working people. In Turkey as around the world, the losses caused by earthquakes and other natural disasters are compounded by the bankruptcy of the capitalist profit system.