At Davos, Spain’s PSOE-Podemos government shows the banks its credentials 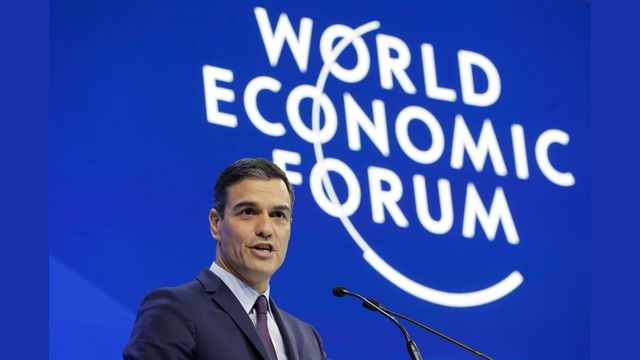 In his speech, Sánchez stressed that his new Socialist Party (PSOE)-Podemos coalition government is committed to austerity: “We maintain our commitment to reducing the deficit and public debt levels, which will undoubtedly generate greater confidence among economic agents and enable us to have a government with greater possibilities for action and future investment.”

His speech was well received, obtaining endorsements from international finance capital. In a closed-door meeting on Spain with investors, Sánchez was told by Franck Petitgas, Head of International Operations at Morgan Stanley that “in the markets we ‘buy’ your arguments, Mr. President. We believe you will lead a responsible government in economic matters and we are not worried.”

Organisation for Economic Co-operation and Development (OECD) Secretary-General Ángel Gurría introduced Sánchez to the forum as “one of the great champions of multilateralism.” Gurría said in an interview with EURACTIV that Sánchez “was very clear yesterday, when I introduced him here in the forum, about the reforms and about his programme. We are going to be supporting him, and we’re going to be working with him and for him so that he succeeds.”

The PSOE-Podemos accord, brokered with Spanish business federations and trade unions, lifting the minimum wage 5.5 percent or €59.8 euros to €1,108 euros ($1,230) gross a month, was not discussed. Those attending shared the opinion of the president of the Confederation of Employers’ Organizations, Antonio Garamendi, who said that “we would have liked [the raise] to be a little lower,” but was satisfied that figure agreed was below the initially proposed €1,167.

The banks understand so well the reactionary role of the pseudo-left Podemos party that after a meeting with investors at Davos, Sánchez smiled and told journalists: “They didn’t even ask me about Podemos, I was the one who had to raise the issue.”

Just five years ago, representatives of the Spanish financial aristocracy like Ana Botín (CEO of Santander Group, Europe’s fifth-largest bank), Francisco González (former CEO of BBVA, Spain’s second largest bank) and Ignacio Sánchez Galán (CEO of Iberdrola, one of the world’s biggest electricity utilities) had to fly to Davos to calm investors about a possible Podemos government. US billionaire and hedge fund manager Raymond Dalio warned: “In Europe, parties are surging like Podemos in Spain.”

Podemos had been founded the year before, becoming the undeserving benefactor of rising social opposition to austerity, militarism and attacks on democratic rights. It had risen significantly from 1.2 million (8 percent of the vote) in the 2014 European elections, to 3 million (12 percent) in the 2015 general elections. It’s leader, Pablo Iglesias, spouted phrases about the “caste,” comprising the Popular Party and the PSOE, and made demagogic promises to reverse austerity.

Five years later, El Confidencial Digital cited sources around Davos who said the main conclusion on Spain is “Pedro Sánchez has deactivated Podemos. This is the message that the CEOs of Santander and Iberdrola have received. They have also been congratulated from some prominent executives from various sectors.”

The fact is that Podemos has not been “deactivated.” Podemos was never created to threaten Spanish or European capitalism. A receptacle for Stalinist or Pabloite petty bourgeois forces whose forebears negotiated the 1978 Transition to parliamentary democracy with the previous Francoite fascist regime, it was always an integral part of the Spanish ruling establishment.

Podemos, as the WSWS warned weeks after its foundation in January 2014, was a “political fraud” seeking “above all to politically disarm the working class.” It was based on postmodernist theories of “left populism” rejecting the revolutionary role of the working class, class struggle, and socialism. The WSWS wrote that Podemos aimed to prevent “a rebellion by the working class against the social democratic parties and the trade union bureaucracy and channeling discontent into supposedly radical, but pro-capitalist, formations.”

Terrified at the growing international upsurge of the working class and reflecting the fears of the ruling class about Spanish imperialism’s international position amid neo-colonial wars, trade wars and deepening divisions in the European Union, Podemos backed a PSOE-led government in 2018. After the elections in 2019, it formed a coalition government. The pseudo-left party calculated this would be the best way to suppress growing social opposition to austerity and militarism, and feather the nests of a layer of affluent middle class youth for which it spoke.

These reactionary policies predictably strengthen far-right tendencies in Spanish bourgeois politics that doubtless also have substantial support among the oligarchs assembled at Davos.

The judiciary is moving to stop the PSOE’s attempts to suspend temporarily the crackdown on the Catalan nationalists to garner their support for the PSOE’s austerity budget. The PSOE and Podemos have overseen Madrid’s anti-Catalan campaign for years, including support for violent crackdowns on protestors, judicial frame ups, the show trial and incarceration of Catalan nationalist leaders and passing anti-democratic laws, like the Digital ‘Gag’ Law.

On Thursday, the Spanish Supreme Court stripped Catalan regional premier Quim Torra of his seat in the regional parliament until a final sentence is reached on his ban from public office. In December, the Catalan Regional High Court found Torra guilty of disobedience for refusing to remove banners in support of jailed pro-independence leaders.

Torra has refused to stand down. Catalan parliamentary speaker Roger Torrent, who has publicly opposed removing Torra from his seat, is now being threatened by the Supreme Court. He could be charged with disobedience.

The public debate is increasingly dictated by the fascistic Vox party, whose resolutions, policies and speeches are widely promoted by the media and the political establishment.

Last week, the plans of the region of Murcia—ruled by the right-wing parties—to force schools to ask for parents’ permission to give “talks, workshops or activities with an ideological or moral leaning against their convictions,” became headline news across Spain. For now, these plans target primarily talks on sex education and LGBTQ+ rights. The measure, which has no popular support, aims at mobilising Vox’s far-right Catholic base.

Days later, Vox again dominated the debate by proposing in parliament to ban Catalan and Basque nationalist parties. The measure would affect six parties represented in the Spanish parliament.

The week ended with right-wing opposition parties calling on Transportation Minister José Luis Ábalos to resign after it emerged that he had secretly met with the Venezuelan vice-president Delcy Rodríguez early Monday morning at the Madrid airport. European Union sanctions, supported and designed by the previous PSOE government, ban Rodríguez from entering European Union airspace.