Seventy-five years after World War II: The ideological preparations for fascism and war

More than 60 students attended the second meeting held by the International Youth and Students for Social Equality (IYSSE) January 21 in its campaign for this year’s student parliament elections at Berlin’s Humboldt University (HU). Christoph Vandreier, the author of the book Why Are They Back?, spoke on how the ideological preparations for war and fascism are taking place 75 years after the end of World War II. 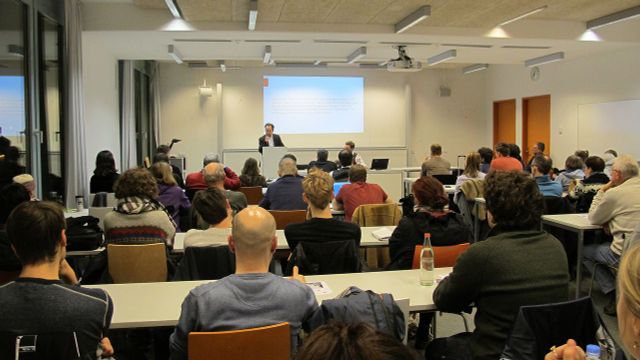 A section of the meeting at Humboldt University

Vandreier began by noting that right-wing extremist forces have always sought to falsify history and trivialise the Nazis’ crimes. “But over recent years, these efforts have been seized upon and supported by broad sections of the media and politicians,” said Vandreier. In this, Humboldt University is playing a key role.

The deputy leader of the Sozialistische Gleichheitspartei (Socialist Equality Party, SGP) dealt in detail with an article published by Der Spiegel in 2014 headlined “The transformation of the past.” The article cites the Humboldt University professor, now emeritus, Herfried Münkler, who stated that Germany did not pursue any imperialist interests during World War I.

However, Vandreier’s main focus was Jörg Baberowski, a professor of Eastern European history at Humboldt University, who declared his support for the most well-known Nazi apologist Ernst Nolte with the justification, “Hitler was no psychopath, and he wasn’t vicious. He did not want to talk about the extermination of the Jews at his table.”

Vandreier cited these statements and demonstrated the grotesque lies and historical falsifications they contain. “If Hitler was not vicious, then this word no longer has any meaning,” he stated. He cited the professor of law Andreas Fischer-Lescano, who argued that cruelty is a characteristic of murder that certainly applies to the Holocaust and found expression in the Nuremberg Trials.

Vandreier demonstrated with a series of citations that the trivialisation and relativisation of the Holocaust and the Nazis’ war of annihilation against the Soviet Union are themes that feature again and again throughout Baberowski’s work. An article appeared in the Frankfurter Allgemeine Zeitung one week earlier, Vandreier pointed out, which defended Baberowski and cited him as saying that Hitler “did not want to know anything” about Auschwitz. 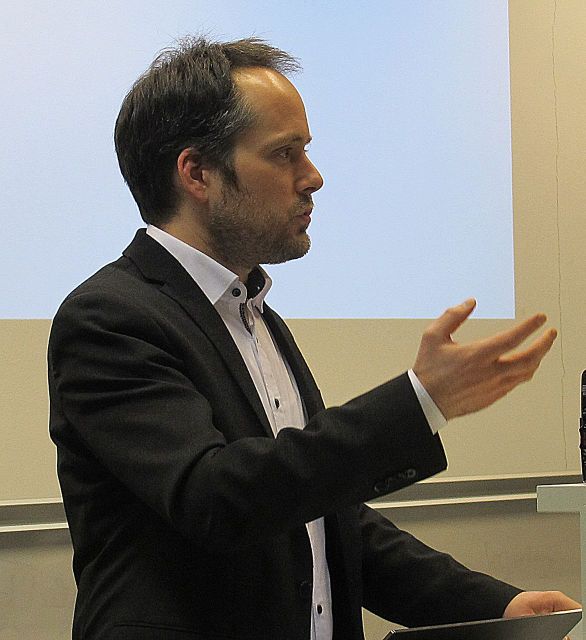 Christoph Vandreier speaking at the meeting

“Once again, it is a scandal that such a statement can appear in one of Germany’s largest newspapers,” stated Vandreier. “It is the old argument of Nazi apologists, who claim the Holocaust was implemented in practice without Hitler’s knowledge.” As evidence, he cited the report written by the historian Peter Longerich for the trial of British Holocaust denier David Irving. The report confirms “that the murder of European Jewry was the outcome of a systematically pursued policy, and that this policy was decisively pursued by the highest authority of the ‘Third Reich,’ Adolf Hitler.”

In addition, Vandreier also demonstrated that Hitler not only gave orders to kill Jews at his dinner table, but also subsequently watched specially prepared films of the worst acts of brutality carried out by the SS. He cited several statements from Hitler and the Reichsführer of the SS, Heinrich Himmler, which prove beyond doubt that Hitler gave the orders to murder Jewish men, women and children, and that extreme cruelty was to be used.

Many attendees responded with shock when Vandreier stated that Baberowski’s statements trivialising Hitler in Der Spiegel went unchallenged for years by a single professor. “On the contrary, the German government and large sections of the media defended Baberowski against any criticism. It was the IYSSE that was attacked for its critique of historical falsification,” he said.

“On May 4 this year, a further step will be taken in transforming Baberowski’s historical falsification into official state doctrine,” continued Vandreier. On that date, the Foundation of Memorials in Saxony has invited Baberowski to deliver the main address at its main commemoration event for the 75th anniversary of the end of World War II, along with German Defence Minister and leader of the Christian Democrats Annegret Kramp-Karrenbauer.

This grotesque falsification of history and the rehabilitation of right-wing extremist ideology can only be understood in the context of the deepening capitalist crisis, continued the speaker. “In order to return to policies of war and extreme levels of inequality, the ruling elite must, in the final analysis, resort to authoritarian and fascistic forms of rule and trivialise the crimes of the past,” Vandreier explained.

Professors Münkler and Baberowski have been in the front rank of attempts to propagate the return to militarism and drive to war. While Münkler urges the government to become Europe’s “disciplinarian,” and denounces politicians who talk about human rights as “lollipop suckers,” Baberowski declares that the war on terror can only be won if one is prepared to “take hostages, burn villages, hang people and spread fear and terror.”

The lead candidate for the IYSSE in the student parliament elections, Sven Wurm, added to the lecture with a few points on concrete developments which make clear the extent of the revival of German imperialist foreign policy and the attacks on social conditions. “The illegal murder of Iranian Gen. Suleimani at the beginning of January, as well as the Libya conference in Berlin last weekend, mark a qualitatively new stage of imperialist aggression by the major powers,” said Wurm.

The IYSSE opposes the growth of militarism with a socialist programme and is waging an unrelenting struggle against historical falsification and the trivialisation at HU of the Nazis’ crimes. “Therefore, I call on all of you to support this struggle,” the lead candidate concluded.

The meeting was followed by a lively discussion. Those present asked questions about the character of fascism, the history of the workers’ movement and the decline of the Weimar Republic. Discussions continued long after the end of the meeting in the hallways and many participants stocked up on placards and flyers for the election campaign.

The next and final election campaign meeting takes place today at 6:30pm and will focus on the revival of the class struggle and the perspective of international socialism. Information on how to vote and a list of all polling stations can be found here.

The Russian Revolution and the Unfinished Twentieth Century