Rallies in Australia and NZ to demand freedom for Assange and Manning. No to US extradition!

The rally in Sydney at 12:00 p.m. Australian Eastern Daylight Time on Saturday, February 22 will be livestreamed on the SEP Australia Facebook page.

The Socialist Equality Party (Australia) has organised rallies in Sydney, Melbourne and Brisbane in February to demand the immediate and unconditional release from imprisonment of WikiLeaks founder and Australian citizen Julian Assange and the courageous whistleblower Chelsea Manning. In New Zealand, the Socialist Equality Group (SEG) has called a demonstration in the capital Wellington on Sunday, February 23. 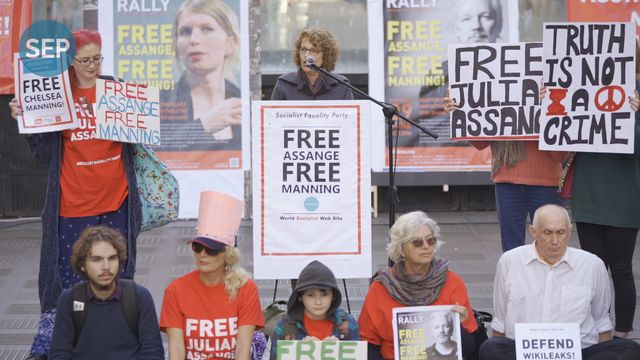 Assange’s extradition hearing begins in London on February 24. The British courts will decide whether to flagrantly disregard fundamental democratic principles and dispatch him to his American state persecutors. The WikiLeaks founder is threatened with a show trial on charges of espionage and the prospect of a life sentence of 175 years for exposing American war crimes in Iraq and Afghanistan, global diplomatic conspiracies and human rights violations. It is the responsibility of all those who defend democratic rights to develop the campaign to win his freedom.

The demonstrations will demand that the Australian government immediately intervene to prevent Assange’s extradition from Britain to the United States and secure his right to return to Australia with full protection from any prosecution. Speakers will include representatives of the SEP, Doctors4Assange, the International Youth and Students for Social Equality (IYSSE) and Assange defence groups.

The Sydney rally will be held on Saturday, February 22 at 12:00 p.m. outside the Town Hall in Parramatta, one of the main centres of the city’s working-class western suburbs. The Melbourne rally will take place on Sunday, February 23 at 2:00 p.m. outside the Victorian State Library and will then march to Federation Square. The Brisbane demonstration will take place in Reddacliff Place on Saturday, February 29 at 2:00 p.m. and is being organised in partnership with the Julian Assange Brisbane Group.

Since last April, when he was illegally dragged out of the Ecuadorian embassy where he had political asylum, Assange has been subjected to the most vindictive mistreatment. He has been imprisoned in virtual solitary confinement in the maximum-security Belmarsh Prison, with restricted access to communication, personal visitors and his lawyers. British authorities have rejected the demands by United Nations Special Rapporteur on Torture Nils Melzer and over 100 eminent doctors that Assange be immediately moved to a hospital. Melzer has repeatedly warned that the medical opinion of those who have examined Assange is that his health has deteriorated to the point that he may die in prison.

The threat of extradition facing Assange is the outcome of a vicious nine-year vendetta directed by successive US governments—with the full support of successive Labor and Coalition governments in Australia.

The treatment of Chelsea Manning, who was imprisoned for seven years for leaking the explosive US army documents and American diplomatic cables to WikiLeaks in 2010, has been no less brutal. Manning has been re-imprisoned since March last year for refusing to appear before a grand jury and retract the testimony she gave during her military trial that she acted alone, without any encouragement or direction from WikiLeaks. She has courageously refused to participate in the attempt to frame-up Assange and condemn him to death in a prison cell despite being imposed with crippling fines of $1000 per day.

Assange and Manning are class war prisoners. Their persecution is the spearhead of an attempt to silence opposition to militarism and war, amid preparations by US imperialism for catastrophic conflicts against Iran and nuclear-armed powers such as China and Russia. It is aimed at criminalising any exposure of the criminality and corruption of governments, the military-intelligence apparatus and corporations, under conditions of a global resurgence of the workers’ struggles for wages, conditions, action on climate change and against war.

The defence of Assange, Manning and all victims of state repression is therefore a vital part of the fight by workers and young people internationally for their social and democratic rights.

The SEP rallies will demand that the Australian government end its collaboration with Washington and immediately use its undeniable legal discretion and diplomatic powers to block Assange’s extradition and secure his freedom.

Under both Labor and the Coalition, Assange’s rights as an Australian citizen have been systematically and wilfully violated. The Greens, the trade unions, the pseudo-left groups and mainstream media have all refused to wage a campaign to defend him or the fundamental democratic rights at stake in his case—despite the overwhelming popular sympathy for Assange among ordinary people.

The support of the Australian political and media establishment for the attacks against Assange flows directly from their commitment to the US alliance and to participating in all of US imperialism’s wars and military preparations, including against China. The Australian ruling elite is pressing ahead with its own assault on democratic rights. After Assange was arrested, unprecedented police raids were launched last year on a News Corp journalist’s home and the Sydney offices of the Australian Broadcasting Corporation (ABC), as part of attempts to prosecute journalists and whistleblowers for exposing Australian government and military criminality.

The Australian parliamentary establishment will only fulfil its obligations to Assange if it feels compelled to do so out of fear of a powerful mass movement of the working class in Australia and internationally. Defenders of Assange, Manning and all class war prisoners must turn to the workplaces, factories, university campuses and working-class suburbs and build the greatest support for boycotts, strikes, occupations and political demonstrations to secure their freedom. The SEP rallies are part of this international perspective, which is being fought for by the World Socialist Web Site and the sections and supporters of the International Committee of the Fourth International around the world.

The SEP welcomes and appeals for the participation in the rallies of all groups and individuals who are genuinely committed to the freedom of Assange and the defence of all democratic rights.

Advertise the demonstrations as widely as possible, especially via social media. Organise speak-outs and other public events and campaigns to promote them. Call meetings and pass resolutions at your workplace, university or school defending Assange and Manning and committing to send delegations to the rallies. Free Assange! Free Manning! No to extradition!