Oppose French unions’ attempts to strangle the struggle against Macron!

Last week, amid continuing strikes and protests, French rail and mass transit workers ended a strike begun on December 5 against President Emmanuel Macron’s pension cuts. Financially exhausted, workers ended the longest continuous strike in France since the May 1968 general strike. As anger builds against Macron and other political representatives of the banks internationally, it is time to draw a balance sheet of this strategic experience of the international working class.

The strike, which rallied support among ongoing “yellow vest” protests, showed the vast power of the working class. Though it slashed economic activity and disrupted commutes, two-thirds of the population supported it against Macron. Strikers knew they were part of a global resurgence of class struggle involving mass protests in Algeria, Iraq and across Latin America, strikes of US teachers and auto workers, and tens of millions of Indian workers striking against anti-Muslim laws. 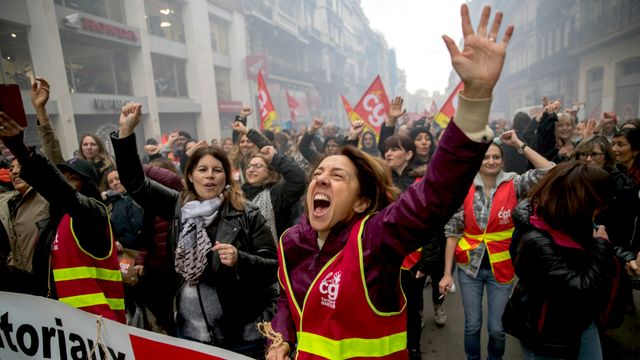 A revolutionary mood is emerging. Calls of “revolution” and “general strike” echoed in protests by millions across France, as demands for a walkout circulated in ports, refineries, and auto plants.

However, the outcome exposed all the pseudo-left parties that called to resolve this conflict via union negotiations with Macron. The Stalinist General Confederation of Labor (CGT) union and French Communist Party (PCF), the big-business Socialist Party, the Pabloite New Anti-capitalist Party and postmodernist “left populist” Jean-Luc Mélenchon signed a brief joint appeal to Macron to “withdraw your plan.” They begged Macron for “immediate talks with the unions on a fair and democratic pension plan that leads to progress for all, without raising the retirement age.”

Instead of mobilizing the working class, however, the CGT and its allies sabotaged the strike, letting Macron proceed. The unions isolated the rail and transit strike, calling no broader strikes in other industries, and paid out only a miserable handful of euros in strike pay over six weeks of rail strikes. Macron could then send his pension-cutting bill to the Council of Ministers Friday, preparing the negotiation of final budget details with the unions and its passage to the National Assembly.

Macron’s policy is to send riot police to crush all opposition. Using armored cars, water cannon and tear gas against protesters, police have arrested over 10,000 people since “yellow vest” protests began in 2018. Brazenly decorating police units responsible for atrocities at protests—like the killings of bystanders Zineb Redouane and Steve Caniço and the nearly fatal assault on elderly protester Geneviève Legay—Macron uses the police as attack dogs for the banks.

Macron leads a violent dictatorship. It planned its pension cuts with finance firms and BlackRock, the $6 trillion global investment firm, which anticipate a windfall as state pensions are slashed 20, 30 percent or more. Insurance firm AXA wrote in a recent ad for wealthy investors that they should buy private pension plans to face “the planned long-term decline in state pension levels.” As for workers, the state intends them to be impoverished after retirement.

The police state’s conscious enmity to the workers is epitomized by Paris Police Prefect Didier Lallement’s curt remark to a Parisian criticizing police brutality at a “yellow vest” protest: “We are not in the same camp, madam.”

Key political and strategic lessons for workers internationally flow from this strike. As the Parti de l’égalité socialiste (PES) warned, there is nothing for workers to negotiate with Macron and, behind him, the international markets and the capitalist financial aristocracy. Stopping the police state’s plans to impoverish the population requires bringing down Macron. However, waging such a struggle requires building committees of action, rank-and-file organizations of the working class independent of the unions, to mobilize far broader layers of workers against him.

The Macron government, isolated and despised, can barely protect itself from the rising outrage in the population. After news magazines reported last autumn that Macron’s family lives in terror of insurrection, he finally dared make a public appearance last week, at the Bouffes du nord theater in Paris. He and his wife Brigitte soon had to flee, however, after his presence provoked protests.

What workers lack is not strength in numbers, courage or determination, but organization, political perspective and leadership. The unions approved the French transit strike last year in a desperate bid to keep control of the workers, after repeated wildcat strikes at the National Railways. Despite this tactical shift, however, they continued to play the central role in negotiating austerity and stabilizing the capitalist regime.

The union bureaucracy did not organize a determined struggle against Macron, but negotiated the pension cuts with him, isolated strikes and opposed a broader struggle. This reflects the unions’ material interests: the French unions’ €4 billion yearly budget is largely funded by the state and business groups. Their class role was exposed by the record of the CGT-PCF’s Greek ally, the Syriza (“Coalition of the Radical Left”) government: it took power in 2015 after an eruption of protests by Greek workers and youth, only to impose draconian EU cuts.

The reactionary role of what the ruling class long falsely marketed as the “left” is a warning: to bring down Macron, workers cannot transfer power to another part of France’s bankrupt political establishment or another faction of the police-state machine. Power must go to the workers who produce the wealth of society and who, in France and internationally, are demonstrating their readiness to fight capitalism. Just over a century after the October 1917 revolution, the question of transferring state power to the working class has re-emerged.

The construction of a new revolutionary vanguard is now decisive. Already, a vast network of “yellow vest” assemblies, strike committees and social media protest groups has formed. After the setback suffered by the initial strike against Macron, the task is to clarify the political tasks that are posed for workers and youth already drawn into the struggle, and to draw broader layers, both in France and internationally, into the fight.

The French section of the International Committee of the Fourth International, the Parti de l’égalité socialiste, is the Marxist vanguard party in France, founded in irreconcilable opposition to the crimes and the betrayals of the working class by Stalinism and the pseudo-left. Its role, as Lenin wrote of the vanguard party in his classic work What is to Be Done?, is “to saturate the proletariat with the consciousness of its position and the consciousness of its task." Lenin stressed, "There would be no need for this if consciousness arose of itself from the class struggle.”

The global wave of strikes and struggles by the working class, of which the movement against austerity in France is just one manifestation, is only beginning. The PES will seek to orient workers and youth in France to this global upsurge of the working class in the struggle to end the outmoded capitalist system and replace it with socialism.

The Struggle Against Austerity in France