After a colon cancer diagnosis, Deb Genetin, a 57-year-old resident of Springfield, Ohio, just outside Dayton, was denied a life-saving surgery at Mercy Health hospital because, in the words of the hospital, her “financing wasn’t in place.” Genetin has not had health insurance in 10 years and makes only $20,000 a year as an administrative assistant in a law firm.

Last month, Genetin told the Times-Reporter, “They never told me how much money they needed, how much money I had to come up with. It was just a ‘No.’” Genetin had previously applied for financial aid through Mercy Health but was rejected. Genetin then sought cheaper care at Ohio Valley Surgical Hospital, where she received the necessary surgery. 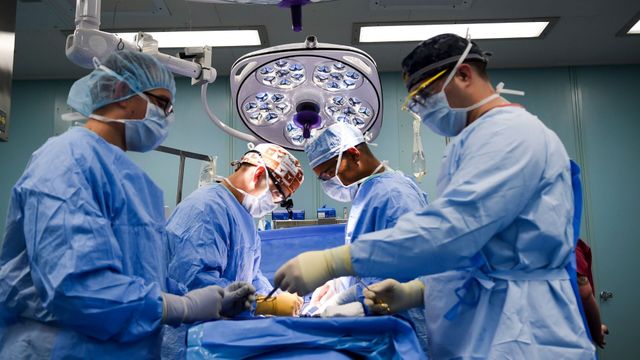 A team of surgeons operate on a patient [Source: Flickr.com]

While Genetin is currently cancer-free and now has health insurance, she is struggling to both meet her payments and pay off medical debt. “I had to drop my hours and my income to get [health insurance] and now I struggle to pay the house payment,” she told reporters.

Genetin is one of thousands of cancer patients in the United States who struggle to afford adequate treatment. In the last decade, researchers and physicians have begun to further explore the patient-level financial and health consequences of high-cost cancer treatment.

A 2018 study from the American Journal of Medicine (AJM), titled “ Death or Debt? National Estimates of Financial Toxicity in Persons with Newly-Diagnosed Cancer, ” evaluate d the extent of financial damage caused by a cancer diagnoses in the United States. The study ’ s large sample size of 9.5 million is a significant extension of previous studies that gathered data on a smaller or state level. The data was pulled from the Health and Retirement Study sponsored by the National Institute on Aging and Social Security Administration. Data was collected from 1998 to 2014 on people over 50 years old.

Inclusion criteria for the AJM study involved new cancer diagnoses of any type excluding minor skin cancer. Based on the year of diagnosis, a baseline financial value was gathered from two years before the diagnosis to act as a control. The trajectory of the patient’s finances was examined at two years and four years following the initial diagnosis. Changes in the patient’s net worth were calculated based on total wealth, a figure including assets and properties and subtracting debts such as mortgages and consumer debt.

The study found that 42.4 percent of the 9,527,522 new diagnoses of cancer between 2000 and 2012 had lost their entire life’s assets by year two. A further thirty-eight percent had depleted their life assets by year four. The average net worth by year two was $92,098, depleted from the average initial net worth of $644,031.

Large decreases of net worth were seen among those with both worsening and improving cancer status. The largest overall decreases were seen in patients over 75 years old with an average loss of $115,000. Comorbidities such as hypertension, current smoker, and lung disease increased the odds of total net worth depletion. Those with Medicaid as compared to private insurance were independently associated with financial losses at year two and four.

This is not a new phenomenon. In 2013, cancer physicians and researchers wrote a two-part manuscript, “Financial Toxicity: A New Name for a Growing Problem” in which they coined a new term, “Financial Toxicity,” to describe the patient-level financial impact of cancer care. The term encompasses both the objective financial burden on the individual and society as well as the subjective experience of financial strain during a period of illness and healing. The inclusion of the word “toxicity” in the term is carefully chosen, as researchers have found that the financial stress of cancer treatment is a risk factor for mortality.

In a study titled “Financial Insolvency as a Risk Factor for Early Mortality Among Patients With Cancer” published in the Journal of Clinical Oncology in 2016, authors Scott D. Ramsey, Aasthaa Bansal and Polly Newcomb linked cancer registry records with federal bankruptcy records. A previous study by the same researchers showed that individuals with cancer are two and a half times more likely to file for bankruptcy compared to those without cancer. With this knowledge, the results of the 2016 study are all the more shocking.

There is no one reason for the correlation between financial toxicity and poor clinical outcomes. Financial insecurity may lead patients to seek out underfunded hospitals where risks of infection or medical errors may be higher. Patients may skip doses of medications or cut pills in half to stretch their prescriptions, in some cases resulting in subtherapeutic, and thereby insufficient, blood levels of medications.

Patients forced to handle large out-of-pocket costs are also more likely to forgo or delay necessary treatments. Cancer patients often work longer hours or cancel vacations to cover medical expenses sacrificing periods of rest and putting undue stress on their bodies during a period of healing. Many lose their jobs after long hospitalizations, or cannot work due to lowered immune systems or fatigue, further dragging them into debt and financial distress. For many, extra expenses for healthy food or even safe, comfortable housing is cut in order to pay for treatment.

In the US, cancer is one of the most expensive diseases to treat, second only to heart disease.

According to the National Cancer Institute (NCI), many chemotherapy agents cost more than $10,000 a month. Many treatment regimens require multiple chemotherapy drugs working in tandem, increasing the cost two- or threefold. And the cost is growing as new pharmacological breakthroughs and treatments carry impossible price tags.

Immunotherapy, for example, is a groundbreaking new treatment that activates the body’s immune system to fight cancer cells. It has been approved in the US and elsewhere as a first-line treatment for many types of cancer. While typical chemotherapy kills all cells, immunotherapy is more precise, sparing healthy cells resulting in fewer side effects and a higher quality of life during treatment. Immunotherapy also capitalizes on the immune system’s ability to continuously adapt in order to kill even the most rapidly changing cancer cells. Relapse rates are reduced with immunotherapy because the immune system has “memory,” and it can remember cancerous cells and fight them if the cancer returns.

While the development of immunotherapy is a result of decades of scientific research across the world—most of which took place in publicly funded institutions—the final, packaged, life-saving product, is only available to a select few. Without insurance, immunotherapy costs roughly $100,000 per person when taken for a year. Like chemotherapy, immunotherapy is often used in combination, which doubles or triples the cost. One immunotherapy agent, named Kymriah, used as a one-time dose to treat refractory non-Hodgkin lymphoma and B-cell acute lymphoblastic leukemia, costs $475,000.

Recent lawsuits against major pharmaceutical companies have shown that the cost of high-priced drugs are not simply a product of research and development—as companies claim—nor are the profits they generate used to fund future innovation. Instead, profits are funneled into stock buybacks, boosting the company’s stock profiles and increasing the wealth of the executives.

Even with private insurance, many patients are denied coverage for immunotherapy or forced to cover up to 25 percent of the cost. Furthermore, drug costs are just one aspect of cancer treatment. Hospitalization, teams of specialists, new advancements in imaging, surgery and radiotherapy collectively contribute to a systemic rise in cancer treatment cost that shoots past the rate of inflation. At the same time, average deductible costs for job-based health insurance have increased from $376 in 2006 to $1,300 in 2019. In a country where 70 percent of people live paycheck-to-paycheck, a single overnight stay in the hospital could deplete a family’s savings.

Young adults, while less likely to be diagnosed with cancer, face an even higher chance of financial ruin after diagnoses. With insufficient savings accounts, student debt, lower-income jobs and lack of eligibility for Medicare, young adult cancer survivors begin their lives buried in debt, many relying on crowdsourcing websites like GoFundMe or private charities to stay afloat.

The upsurge in research on the financial impact of cancer treatment has spurred many health care workers to advocate for screening patients for financial toxicity as well as initiating open conversations about the financial stress of treatment. However, aside from connecting patients with resources like private charities that cover a limited portion of treatment costs, conversations and awareness about financial toxicity are not a solution, as the problem finds its source in the capitalist system and the historic levels of social inequality that it has produced. Among rich and middle-income countries, the US has some of largest income-related disparities in health care. In the face of a cancer diagnosis, this translates directly to financial ruin and higher mortality among poor and working-class Americans.