Following the January 19 Berlin conference on Libya, war tensions between NATO powers over Libya and the Mediterranean continue to mount, after Greek Prime Minister Kyriakos Mitsotakis visited Paris on Wednesday for talks with French President Emmanuel Macron. The Berlin conference has set the stage not for peace, but only for stepped-up imperialist military interventions to divide up the profits to be extracted from Libya and the entire region.

With Mitsotakis, Macron announced the dispatching of French warships to the Aegean Sea and the formation of a French-Greek military alliance, while denouncing Turkish policy in Libya. Amid explosive border tensions and conflicts over eastern Mediterranean natural gas deposits between Turkey and Greece, Paris is threatening to support Greece in a war with Turkey. 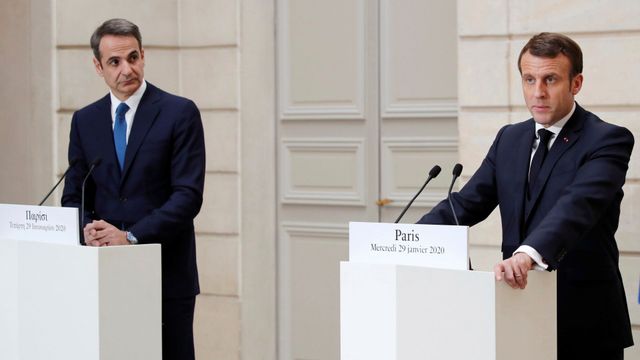 Macron accused Turkish President Recep Tayyip Erdogan of “not respecting his promises” in Berlin, saying that “at this very moment” Turkish ships were taking Syrian Islamist mercenaries to Libya. “We have seen in recent days Turkish vessels arriving on Libyan soil … in violation of explicit engagements taken by President Erdogan at the Berlin conference,” Macron said. He added, “This threatens the security of all residents of Europe and the Sahel.”

Macron, who has backed warlord Khalifa Haftar in the civil war provoked by the 2011 NATO war in Libya, said he “condemns with the greatest firmness the recent accord” between Turkey and Haftar’s main rival, Fayez al-Serraj’s Government of National Accord (GNA).

During the Macron-Mitsotakis conference, anonymous intelligence officials told French media that Rafale jets flying from the aircraft carrier Charles de Gaulle had detected Turkish ships transporting heavy armored vehicles and mercenaries into Libya’s capital of Tripoli, held by the GNA. They also alleged that the ships transporting the troops and hardware were escorted by one of several Turkish frigates cruising in Libyan waters.

Macron maintained a hypocritical and self-interested silence on French-backed Egyptian and United Arab Emirates (UAE) weapons shipments to France’s Libyan proxy, Haftar. “The position of Paris remains totally inflexible,” Le Monde wrote. “Marshal Haftar, who more or less controls most of Libya’s territory, must be taken into account and his demands—disbanding Islamist ‘militias,’ giving more oil revenue to the eastern Libyan region of Cyrenaica—are not negotiable.”

Macron also announced a “strategic security partnership” between France and Greece and declared that he “condemns the intrusions and provocations of Turkey” in Greek airspace and waters. France will rotate its warships through the eastern Mediterranean to ensure that at least one French frigate is in the area at all times. The purpose of the stepped-up French naval presence, Macron added, is “to fully ensure the security of a region that is strategic for Europe.”

Mitsotakis hailed the deal with France, saying: “Greece and France are pursuing a new framework of strategic defense.” Details of the Franco-Greek military alliance are to be announced in coming weeks. However, it appears French warships will likely patrol gas-rich waters off Cyprus, where the Greek Cypriot government has given French energy giant Total exploration rights.

While Mitsotakis called the French warships “guarantors of peace” in the Aegean, it is clear that the danger of military conflict between major NATO allies is very real. Greek Defense Minister Nikos Panagiotopoulos said his staff is “examining all scenarios, even that of military engagement” with Turkish forces at flashpoints like the Aegean Sea or Cyprus.

Turkish officials responded by denouncing the French intervention in the eastern Mediterranean. “If France wants to contribute to the implementation of decisions taken at the [Berlin] Conference, it should first stop supporting Haftar,” Turkish Foreign Ministry spokesman Hami Aksoy declared in a statement. “The main party responsible for all Libya’s problems since the beginning of the 2011 crisis is France,” Aksoy added, noting that France “unconditionally supports Haftar to have its say over the natural resources in Libya.”

NATO’s 2011 war against Libya launched a bloody scramble for profits and strategic advantage in the region that has had disastrous consequences. After the Berlin conference, the imperialist powers are again recklessly intensifying their military intervention. As France, Russia, Egypt, and the UAE intervene to back Haftar in Libya while Italy, Turkey and Qatar back Serraj, the danger of a major regional war over Libya or the eastern Mediterranean is ever greater.

The scramble for Africa and the Mediterranean is intensifying deep and explosive divisions among the major NATO imperialist powers. Last year, France withdrew its ambassador to Italy as tensions mounted between Paris and Rome over Libya.

While Washington has not taken a public position on Greece or Libya, US Secretary of State Mike Pompeo signed deals last October to build major new US military bases in Greece, saying Washington needs them “to help secure the eastern Mediterranean.” White House spokesman Judd Deere claimed that tensions between NATO powers forced Trump to call Erdogan on Monday. During the call, Trump reportedly stressed the “importance of Turkey and Greece resolving their differences in the east Mediterranean.”

Faced with the prospect of US and French military build-ups in Greece, sections of the Turkish bourgeoisie close to Erdogan are calling for closer ties with Berlin to counteract Paris.

The pro-government Daily Sabah call for an outreach to German Chancellor Angela Merkel, who it said needs close cooperation with Turkey to power German industry and keep Middle Eastern refugees from reaching Europe. “Let’s give credit where credit is due: Merkel’s foreign policy is far more reasonable than French President Emmanuel Macron’s approach,” it stated, adding, “Merkel knows that the US abdication of its global responsibilities compels Europeans to take care of themselves and, by extension, to work with Erdoğan's Turkey.”

It concluded, “To improve Germany’s relations with Turkey and keep the upper hand in Libya, Merkel needs to overcome two obstacles: French and Greek adventurism. Macron undermines Libyan peace and stability by throwing his weight behind Haftar … Germany has to stop France and Greece. Let’s see if Merkel will manage to wrap up her political career by completing this urgent mission.”

As imperialist wars spread across the Middle East and Africa, Macron is pursuing a reckless policy in defense of French imperialist interests. On the one hand, he is continuing neo-colonial wars and intervention in Mali and the broader Sahel, south of Libya, supposedly to fight Islamist militias. At the same time, he is bidding to obtain for French oil firm Total a lion’s share of Libyan oil, should Haftar conquer the country, and of eastern Mediterranean gas via deals with the Greek Cypriot government.

This poses a growing risk of an outright military confrontation with Turkey, as Macron is launching an alliance with Greece amid explosive Greek-Turkish tensions. Britain’s Guardian newspaper wrote that, “Friction between the two neighbours has not been so acute since the invasion of Cyprus in 1974” by Turkey, which led to war with Greece. It added that, for Mitsotakis, “hostile relations with Turkey have eclipsed all other issues on the agenda of his near seven-month-old government.”

While he claimed the war danger is “slim, not least because it would be too much of a lose-lose situation,” University of Piraeus Professor Aristotle Tziampiris told the Guardian that “the chances of a [hot] incident, by design or accident, are very real and that is what is worrying us all.”