Socialist Equality Party (US) presidential candidate Joseph Kishore spoke at the third meeting in the International Youth and Students for Social Equality’s (IYSSE) campaign for the student parliament elections at Berlin's Humboldt University on January 28.

The meeting, under the headline, “The new class struggles and the perspective of international socialism,” was attended by more than 60 students. 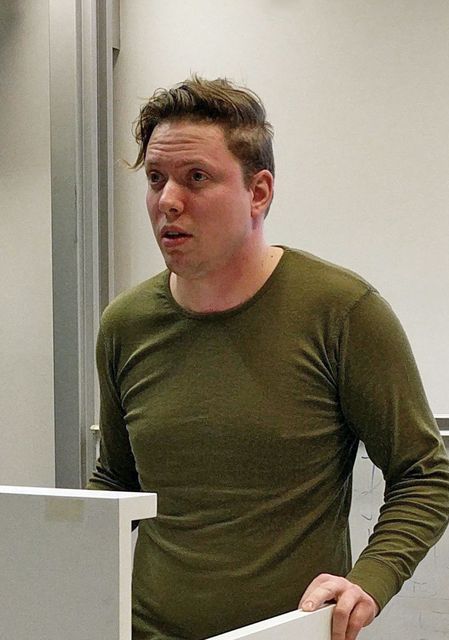 Helmut Wolff, a candidate for the IYSSE in this year’s student parliament elections, introduced the meeting. “I’m very pleased that members of our world party will be able to address this meeting by video this evening. In our election campaign, we have stressed that workers and young people can only realize their interests if they unite on a global scale. To the capitalist logic of inequality and war, they must counterpose the socialist perspective of the worldwide unification of all workers.”

The first speaker of the evening was Alex Lantier, national secretary of the Parti d’égalité socialiste (PES), the French section of the International Committee of the Fourth International.

“It is 15 months since the ‘yellow vest’ protests began,” said Lantier. “For nearly two months, mass protests by millions of workers and youth have continued against Macron’s pension cuts, which became France’s longest strike since the May 1968 general strike. There are growing calls to bring down the Macron government.”

The developments in France have exposed the thoroughly reactionary character of the trade unions and pseudo-left, he continued. The General Confederation of Labour (CGT), the Communist Party, the social democrats, the Pabloite New Anti-Capitalist Party (NPA), and the left populist Jean-Luc Melenchon all claimed that the conflict could be resolved through trade union talks with Macron, which has led the workers into a blind alley.

But Macron and the entire ruling elite are determined to enforce the social attacks with ruthless violence in the face of popular opposition, Lantier reported, before providing a shocking summary of the extent of police violence in France.

“The scope of police repression in France is unprecedented since the Nazi occupation,” he explained. “Using armored cars, water cannon and tear gas against protesters, police have arrested over 10,000 people since “yellow vest” protests began in 2018. Brazenly decorating police units responsible for atrocities at protests—like the killings of Zineb Redouane and Steve Caniço, or the near-fatal assault on elderly protester Geneviève Legay—Macron uses the police as attack dogs for the banks.”

Joseph Kishore, who is also the national secretary of the Socialist Equality Party in the US, spoke to the meeting only two days after the SEP announced his candidacy along with vice presidential candidate Norissa Santa Cruz. 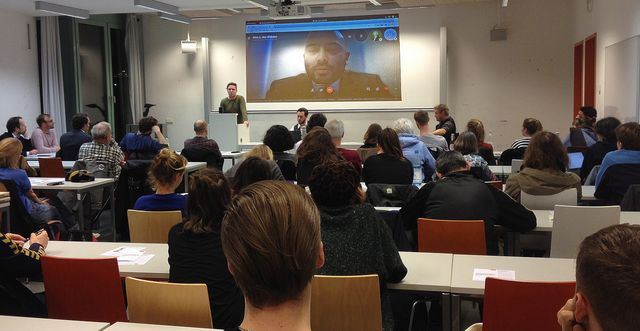 Kishore, who spoke via videolink from Detroit, stated, “The distance between us is just under 7,000 kilometers. However, the political issues confronting workers here and workers there, and for that matter workers and young people throughout the world, are fundamentally the same.”

Kishore said that it was “entirely appropriate and indeed correct” to speak to a meeting in Berlin at the beginning of his campaign.

“In our statement announcing the campaign,” Kishore noted, “we stressed that its orientation is not only to workers and young people in the United States, but to workers throughout the world. Indeed, there is not a single social problem facing masses of people that can be solved on a national basis. The growing danger of world war, which threatens the very future of humanity; social inequality, which has reached levels without precedent in history; the turn by the ruling elites toward fascism and dictatorship; the accelerating threat of climate change and ecological catastrophe; now the rapid spread of the coronavirus—these are all global problems that require a global solution.”

Kishore reported that autoworkers in the United States conducted the first national strike last autumn in over 40 years. Prior to that, tens of thousands of teachers and other sections of workers also went on strike. There is a deep hostility to the entire political establishment, growing support for socialism, and mounting opposition to capitalism, he added.

“The political radicalization of workers in America is of immense international significance,” he said. “As you know, American imperialism is a force of destruction all over the world. The drive by the American ruling class to control the world, to maintain its global hegemony through military force, imperils the entire planet…

“The American ruling class is seeking to control the globe, but it will find and is finding that it cannot control its own house. Imperialism is coming into conflict with the revolutionary eruption of the class struggle.”

Kishore also emphasized that the critical task was the building of a revolutionary leadership. “Workers and young people cannot allow themselves to be diverted behind one or another faction of the ruling elite,” he stressed. “There is no progressive tendency to be found within the capitalist parties.”

This is clear in the United States in particular. While Trump is consciously attempting to cultivate a fascist movement based on extreme nationalism, anti-immigrant chauvinism, and hatred of socialism, the opposition Democrats have nothing progressive to offer, the speaker went on. “Employing the methods of a palace coup, the Democrats seek Trump’s impeachment only because he, in their view, has undermined the US campaign against Russia and the proxy war in Ukraine,” said Kishore.

Kishore concluded, “What is required is not a tinkering around the edges, futile reforms within the framework of capitalist politics. We live in a revolutionary epoch, and the working class requires revolutionary politics. A political movement must be built that is deeply rooted in the historical experiences of the past, which has drawn from these experiences the critical lessons that must inform the politics of the present. Not the politics of wishful thinking, of pragmatic maneuvers, but a politics based on the science of perspective, on class analysis, on Marxism.”

Kishore ended his remarks by emphasizing the importance of the work carried out at Humboldt University. “I would like to refer again to the immense importance for the entire world of the work carried out by the Sozialistische Gleichheitspartei in Germany and the IYSSE at Humboldt University,” he stated. “You have performed an immense service to the international working class in identifying the significance of historical revisionism and its connection to the promotion of the far right and the remilitarization of the German state.” 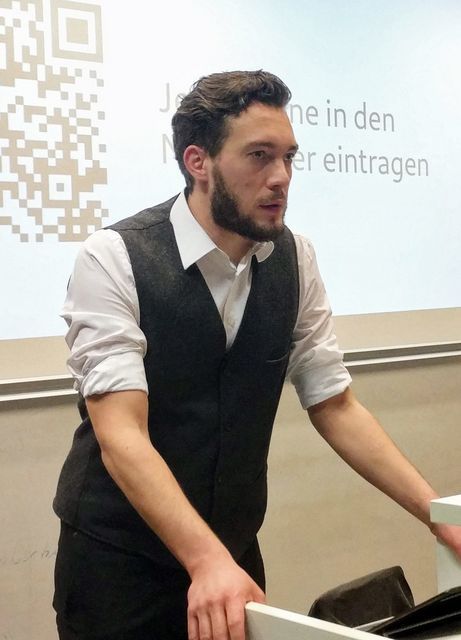 Sven Wurm, spokesman for the IYSSE, and a candidate for the student parliament, focused in his concluding report on the central role played by Humboldt University (HU) in trivializing the Nazis’ crimes and preparing ideologically for war, as well as the IYSSE’s struggle against it.

“Here, one week prior to the anniversary of the liberation of Auschwitz, Professor Jörg Baberowski was able to declare that Hitler did not revel in cruelty and wanted to know nothing about Auschwitz,” remarked Wurm. “And this assertion, which comes directly from the classic arsenal of Holocaust deniers, was printed in the Frankfurter Allgemeine Zeitung.

“Here, the political scientist Herfried Münkler can declare that it is once again appropriate to speak ‘the language of power,’ and here university management, led by the Social Democrat politician Sabine Kunst, was able several months ago to have police break up a student assembly where students were protesting against Turkey’s invasion of Syria.”

But there is also resistance at Humboldt, continued Wurm. “Each time we organize events or campaigns on these issues, we have packed seminar rooms or lecture theatres,” he told his audience. “‘How can it be that something like this happens at a German university?’ is the most common response we hear when we talk about the right-wing developments at HU.”

Wurm explained that the ruling class in Germany, just like in France and the United States, is responding with war and dictatorship to mounting international conflicts and the widespread political opposition in the population. Wurm concluded by appealing strongly to those present to draw the necessary conclusions from this. He called on the students to vote for the IYSSE, mobilize friends and classmates to vote, to become members of the IYSSE and join the struggle for a socialist future.

Following the speeches, an intensive discussion took place, underscoring that a new generation of workers and students is being radicalized and searching for a revolutionary way out of the capitalist crisis. Topics discussed included the role of the working class as an objective revolutionary force, climate change and socialism, and why a revolutionary leadership is required to raise the consciousness of the masses and lead the coming revolutionary struggles successfully based on the lessons drawn from the history of the 20th century.