One week after Ford Motor Company announced plans to temporarily lay off 270 workers at its stamping plant in suburban Chicago Heights, the auto company is set to cut more jobs.

“Morale is at point of mutiny,” a Ford stamping worker told the WSWS Autoworker Newsletter last Friday in response to the layoffs. “They’re checking bags on the way in and out.”

United Auto Workers (UAW) Local 588 sent notice to plant workers on the union’s mobile app last Thursday announcing Ford’s intent to lay off more workers. George Pearson, a Local 588 representative, posted, “The company has approached the UAW about contemplating placing more trades out on an Indefinite Lay Off (ILO). The claim is being related to a loss in volume here at our facility. The exact number and affected trades has not been determined at this time.” 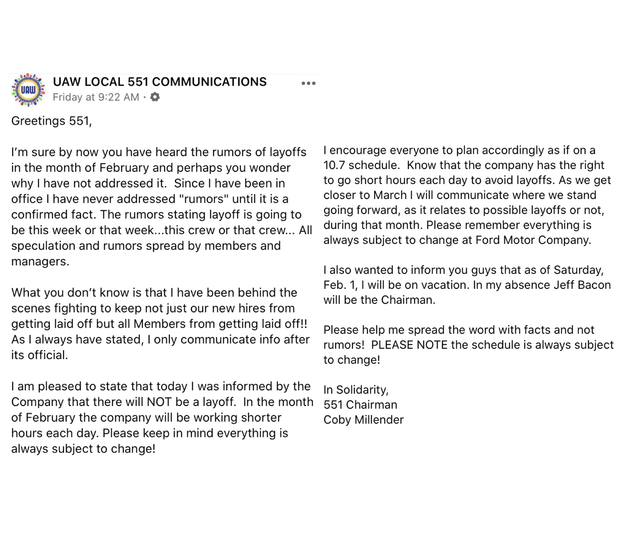 While Pearson states Ford is intent on laying off skilled trade workers, there is no guarantee these cuts will not expand to production workers too. A worker informed the WSWS Autoworker Newsletter that Ford may be seeking as much as a 30 percent across-the-board reduction in its workforce at the stamping plant.

Last month Ford announced it was seeking 270 volunteers to take temporary layoffs. The total hourly workforce at the plant is 1,180. It appears Ford did not reach its quota and is now forcing through the job cuts. As one Ford stamping worker put it, “If they don’t get their numbers then they go to temps and low seniority to achieve the number.” The company is making the job cuts, he said, even though “Ford is spending $3 million to renovate the front offices.”

The statement from UAW Local 588 makes clear the UAW is complicit in the job cuts. The 2019 contracts the UAW rammed through against the opposition of nearly half the Ford workers guarantees the company “flexibility” to slash jobs, force higher-paid senior workers to take “voluntary buyouts” and expand the use of highly exploited temporary workers. It also sanctioned the closure of the Romeo Engine Plant north of Detroit, eliminating 600 jobs. 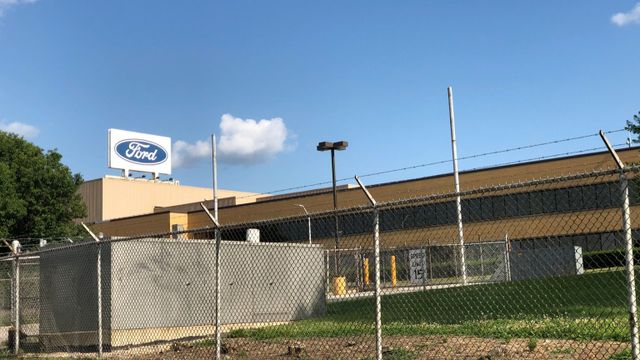 There is little doubt that newly installed UAW President Rory Gamble—who was a long-time fixture in the UAW-Ford Department—gave the go ahead for the layoffs.

The statements by Local 588 rep George Pearson, that “the exact number” of layoffs has not been determined, confirms that the local union will do nothing to oppose the job cuts and is colluding with management to prevent any resistance by rank-and-file workers.

A day after Local 588 informed stamping workers of new layoffs, Coby Millender, chairman of UAW Local 551, which covers more than 5,500 workers at the Ford Chicago auto plant (CAP), informed CAP workers on Facebook of looming cuts to workers’ hours. Millender patted himself on the back for “fighting behind the scenes” to stop Ford from laying off workers. Instead the UAW agree to cut the hours and pay checks of the workers instead. This will have a devastating impact, particularly on lower paid second tier and temporary workers, including the many single parents who work at the plant.

Millender then reminded workers, “Know the company has the right to go short hours each day to avoid layoffs.” He made clear that layoffs are not off the table, stating in March he “will communicate where we stand going forward, as it relates to possible layoffs or not, during that month.” The collusion of Local 551 exposes the role of so-called union dissidents such as Scott Houldieson, the former local union vice president. Houldieson, who is supported by the Labor Notes publication, claims that the UAW can be reformed through the direct election of union officers. While workers, of course, oppose the thoroughly undemocratic process of appointed union presidents, the transformation of the UAW into a bribed tool of management is not the product of this or that corrupt official. Instead it is the result of its nationalist and pro-capitalist program and the decades of labor-management collusion that has resulted in the destruction of hundreds of thousands of jobs.

Since 2004, Ford has reduced its US hourly workforce from nearly 90,000 workers to around 55,000. Last year, the company announced it was cutting 12,000 hourly jobs and closing or selling of six of its 24 plants in Europe by the end of 2020. Ford also eliminated 7,000 white collar jobs, including at least 2,300 in the US. This is part of a global restructuring of the auto industry, with VW, Nissan and other automakers announcing tens of thousands of job cuts.

Ford’s layoffs also expose the UAW’s fraudulent claim that it achieved a “pathway” to full-time employment for thousands of temporary workers. In the maze-like contract agreement “temporary full-time workers” only, not “temporary part-time,” will be able to convert to full-time permanent in 2020 if they work non-stop over three years without a layoff longer than 30 days. The new job cuts will force temps to restart their three-year treadmill to achieve full time status.

The layoffs have only increased workers hostility to the UAW. “Workers are feeling they can’t trust the company or union. They are hearing more from the company about cutbacks and getting denials and concealment from UAW,” a Ford stamping worker said. “Tensions and uncertainty are running high and that's dangerous in a plant that has the potential to get you killed if your head is not in the game.”

The Ford layoffs follows the permanent closure of GM’s Lordstown assembly plant in Ohio, the looming temporary shutdown of the GM’s Detroit-Hamtramck (D-Ham) plant, and the layoffs of temporary workers at GM assembly plants in Ft. Wayne, Indiana. The layoff of 814 D-Ham workers starting later this month will lead to hundreds of transfers to Flint Assembly and other plants, leading to the bumping out of hundreds of temporary workers.

A week ago new layoffs were announced at Fiat Chrysler Automobiles (FCA) Belvidere Assembly Plant in northern Illinois, the third in the last six months. Speaking on the use of temporary workers at FCA, a Belvidere worker told the WSWS Autoworker Newsletter, “The way this contract is written for the Big Three, they can screw anyone getting close to their full-time flip [i.e., conversion] date.” In February 2019, FCA eliminated the third, i.e., “C” shift at Belvidere, amounting to a loss of 1,371 jobs.

The UAW has done and will do nothing to stop job cuts and layoffs. Working on behalf of the auto companies, through legal and illegal means, the UAW’s latest contract agreement is tailored to meet the needs of Ford and Wall Street, not workers. The union’s top leadership, including current president Rory Gamble and two former presidents, are implicated in a corruption scandal involving taking millions in bribes to sign pro-company contracts and embezzling union funds.

A fight against job cuts is only possible if workers take the initiative to build rank-and-file factory committees, independent of the corrupt UAW. These committees must reject the demand for job cuts and reductions in hours. The workers are not responsible for the growing economic crisis and the reckless decisions of corporate management, which were designed to enrich shareholders and corporate executives. At the same time, rank-and-file committees must unite autoworkers throughout the US, Mexico, Canada and throughout the world. The only answer to a global attack by the transnational corporations is to reject the nationalism of the UAW and unite across borders to defend the jobs and living standards of all workers.