Dozens killed in growing border clashes between Turkey and Syria 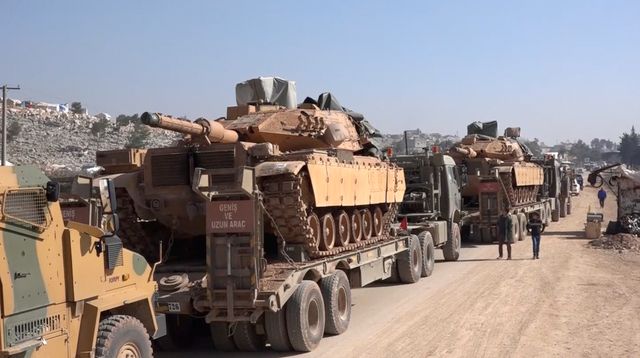 A Turkish Armed Forces convoy is seen at the northern town of Sarmada, in Idlib province, Syria. (AP Photo/APTN)

In a statement, the Turkish Defense Ministry claimed that Syrian shelling targeted “our elements sent as reinforcements to prevent clashes in Idlib, despite their positions being coordinated beforehand.”

Before departing for Ukraine on an official visit, Turkish President Recep Tayyip Erdoğan said, “Turkey has retaliated against this attack as it did previously, and it continues the retaliation.” He added that “Some 40 positions have been targeted in an ongoing operation,” claiming that “30-35 [Syrian] regime troops” were killed by Turkish howitzer shells and bombs dropped from F-16 fighter jets. Subsequent reports indicated that 12 Syrian troops were killed and approximately 20 wounded.

Erdoğan continued, “We are determined to continue our operations to ensure the safety of our country, our nation and our brothers in Idlib,” that is, remaining Al Qaeda-linked Islamist militias. He threatened Russia “not to stand in Turkey’s way.”

However, the Russian military denied Turkey’s claims that it had notified Moscow of the Turkish troops’ position. According to RT, the Russian Center for Syrian reconciliation declared: “Units of the Turkish military conducted movement within the Idlib de-escalation zone during the nighttime from February 2 to February 3 without informing the Russian side and came under fire from Syrian government troops, which were targeting terrorists west of Saraqib.”

At least 4 of Turkey’s 12 military observation posts in Idlib are still besieged by Syrian regime forces.

The clash came amid growing tensions between Turkish officials and their Russian and Syrian counterparts over Syria’s offensive against Al Qaeda-linked forces in Idlib, and the significant gains by Russian- and Iranian-backed Syrian troops in recent weeks. They seized Maaret al-Numan, a strategic town.

Last week, Erdoğan criticized his “Russian partner” reportedly for the first time since the 2016 military coup launched against him with US and German backing. He alleged that Russia “doesn’t comply” with the 2018 Sochi agreement, a September 2018 agreement to establish a jointly patrolled “demilitarized zone” between Syrian government troops and the Western-backed “rebels” concentrated in Syria’s northwestern Idlib province. He added that the Astana process negotiations between Russia, Iran and Turkey is “dead.”

Erdoğan also threatened on Friday that “We will not watch the situation in Syria. … We will not hesitate to do whatever it takes, including using military force.”

Kremlin spokesman Dmitry Peskov responded: “Russia is in full compliance with the Sochi agreements on the Idlib zone,” adding that “A large number of terrorists remain in the area.”

Despite growing military-strategic ties between the two countries, with the deployment of Russian S-400 anti-air missiles to Turkey and the TurkStream gas pipeline, which Washington has denounced, the shaky alliance between Ankara and Moscow is the closest it has been to collapse since November 2015. At that time, Turkish jets shot down a Russian bomber along the Syrian-Turkish border, bringing Russia and Turkey, and potentially the entire NATO alliance, to the brink of war.

As top US officials denounce Syrian and Russian forces fighting in Idlib province, it appears that the Turkish government is tacking back towards closer alignment with Washington. At the end of December, Trump tweeted on Idlib that “Russia, Syria, and Iran are killing, or on their way to killing, thousands of innocent civilians in Idlib Province. Don’t do it! Turkey is working hard to stop this carnage.”

Similarly, Secretary of State Mike Pompeo declared last week: “The United States is monitoring with grave concern the situation in northwest Syria where the combined forces of Russia, the Iranian regime, Hizballah, and the Assad regime reportedly are conducting a large-scale assault upon the people of Idlib and western Aleppo provinces.”

Meanwhile, US Air Force General Tod Wolters, the commander of the US European Command and NATO’s Supreme Allied Commander Europe, visited Ankara on January 30 for talks focused on Syria. He met with both the defense minister and the Turkish chief of the general staff.

The grave war danger in Syria is the direct product of a nearly decade-long proxy war for regime change waged since 2011 by the imperialist powers in Syria, backed by the Erdoğan government. The 2011 NATO war in Libya and the subsequent arming of Islamist militias against the Assad regime were the imperialist powers’ response to revolutionary uprisings in the working class that toppled imperialist-backed dictators in Egypt and Tunisia. Their goal was to undermine Russian and Iranian influence across the region, and to use Syria as a base for operations.

The fighting between Turkish and Syrian troops is the bloody outcome of the repeated maneuvers and strategic shifts carried out by the imperialist powers during this decade of war.

Initially, the imperialist powers led by Washington, the Persian Gulf oil sheikdoms and Turkey poured tens of thousands of Al Qaeda-linked Islamists into Syria, especially through Turkey—a process coordinated by the CIA that created the Islamic State of Iraq and Syria (ISIS), Washington’s own Frankenstein’s monster. In 2014, after ISIS invaded Iraq from Syria, threatening Washington’s Iraqi puppet state, the NATO powers launched a renewed intervention in Iraq and Syria in a so-called “war against ISIS.”

With their Islamist allies in Syria divided and defeated, the imperialist powers made the Kurdish-nationalist People’s Protection Units (YPG) militia their main proxy force inside Syria. However, Ankara saw the YPG, linked to the Kurdistan Workers Party (PKK), against which Ankara has fought a bloody counterinsurgency in southeast Turkey for the last 35 years, as a fundamental threat to Turkey’s territorial integrity. Erdoğan moved closer to Moscow against the YPG, leading to the US- and German-backed coup attempt in July 2016 and to repeated Turkish incursions against the Kurdish forces in northern Syria.

Last year, Washington abandoned its Kurdish proxies in northern Syria, after which both Turkish and Syrian regime forces invaded the area. As the World Socialist Web Site warned at the time, “As the Syrian army backed by Iran marches north to meet Turkish invasion forces and their Al Qaeda-linked Syrian ‘rebel’ allies, the Middle East and the world are on the brink of all-out war. … Turkey has plunged into the maelstrom produced by three decades of imperialist war in the Middle East.”

While Moscow negotiated an unstable truce between Turkish and Syrian government forces in the region last year, this truce is now on the verge of collapse—notably as tensions surge between Turkey and Russia in Libya, where they are backing rival sides of the civil war triggered by the 2011 NATO war.

Above all, Washington is still escalating tensions in Syria as it threatens Iran with a region-wide war. It continues to occupy the oil and gas fields of Syria’s northeastern Deir Ezzor province with its YPG proxies and has inflamed tensions throughout the region with its drone murder of Iranian General Qassem Suleimani on January 3 in Baghdad. These policies, part of a large-scale preparation for “great power” conflict with Russia and China across the Middle East are bringing the world to the brink of all-out war between nuclear-armed powers.