Last week, the South Dakota House of Representatives passed bill H.B. 1057, known as the “Vulnerable Child Protection Act,” which stipulates that any medical professional providing a minor, emancipated or not, under 16 with gender transition care, including gender reassignment procedures or administering hormones and puberty blockers, will be charged with a Class 1 misdemeanor, a year in jail, and a maximum fine of $2,000.

The Republican-led House voted 46–23 in favor of the bill, moving South Dakota closer to becoming the first state in the history of the United States with such legal restrictions. The bill now goes to the Health and Human Services Committee of the State Senate, and if approved there, to a vote by the Senate as a whole, which has a 30–5 Republican majority.

Just over a month into the new year, six other states have begun work on bills that seek to restrict the access of transgender youth to health care services related to gender transition and to punish doctors who get in the way. State legislatures in Missouri, Florida, Colorado, Kentucky, Oklahoma and South Carolina are all considering bills nearly identical to South Dakota’s H.B. 1057. 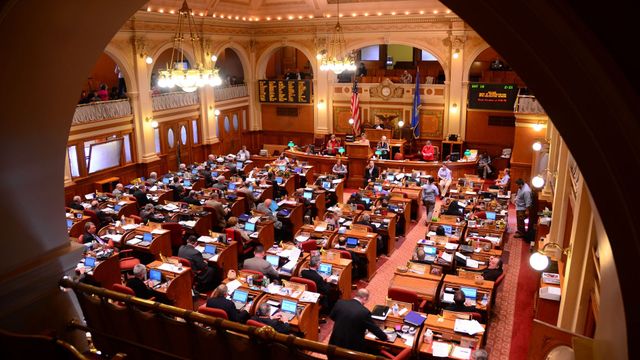 At a time of intensifying class tensions and emerging mass struggles, the bill appeals to the most reactionary elements of American society. It seeks to vilify transgender people in an attempt to move the spotlight away from growing social inequality, to divert attention from the fundamental class issues to issues of identity.

Trump is taking advantage of the issue of transgender rights to spread backwardness and disorientation. Appealing to his right-wing and fascistic base, he reversed the bathroom policy and banned transgender people from the military.

The reactionary and obscurantist outlook behind the campaign against transgender people was summed up by Republican South Dakota State Representative Fred Deutsch, a sponsor of H.B. 1057, who in 2016 introduced the first “bathroom bill,” which sought to ban transgender students from public school bathrooms of their preferred choice. Deutsch recently stated that gender reassignment physicians are carrying out actions akin to the experiments of Nazi doctors.

“To me, that’s a crime against humanity when these procedures are done by these so-called doctors,” he said. “You know, I’m the son of a Holocaust survivor. I’ve had family members killed in Auschwitz. And I’ve seen the pictures of the bizarre medical experiments. I don’t want that to happen to our kids. And that’s what’s going on right now.”

Deutsch makes fascism, whose origins lie in the inherent breakdown and failure of capitalism, equal to gender transition surgery. He outrageously equates the sadistic experiments of the Nazis with the voluntary and desired treatment of gender dysphoria in young people who face bullying and increased risks of suicide.

The South Dakota bill places the onus of the complex issues of transgender people on doctors, professionals whose are discharging their responsibilities in the treatment and care of their transgender patients. Attacking doctors who provide transitional care for transgender youth, the bill aims to prevent youth from obtaining it.

According to the Centers for Disease Control and Prevention (CDC), nearly 2 percent of high schoolers identify as transgender; 27 percent of these youth feel unsafe at school or traveling to or from their school campus; 35 percent are bullied at school; and 35 percent attempt suicide. The CDC found that youth who receive puberty blockers, a means of gender transition that involves hormonal changes and does not include surgery, have a reduced risk of suicide.

In recent years, the Democratic Party has also cynically taken advantage of the plight of transgender people, creating a national controversy in 2016 in response to a reactionary North Carolina law that would require transgender people use the bathroom corresponding to the gender on their birth certificate.

The World Socialist Web Site wrote that the law “is reactionary and must be opposed, together with the rest of the recent efforts by Republican-controlled state legislatures to pass laws invoking ‘religious liberty’ to whip up bigotry and codify intolerance against gay and transgender people.”

“There is an immense element of political and electoral calculation and cynicism on both sides of this controversy. In an election dominated by mass anger over economic inequality and the control of the political system by Wall Street, there is a desire by both parties to change the subject. The Republicans are seeking to mobilize their base among more backward, disoriented and economically depressed middle class layers. The Democrats are seeking to appeal to layers of the more privileged upper-middle class that have made various issues of identity—race, gender, sexual orientation—their obsessive focus.”