The document, entitled National Counterintelligence Strategy of the United States of America, 2020-2022, is dated January 7, 2020 and signed by President Donald Trump. It states that the US is facing an “expanding array of foreign intelligence threats by adversaries who are using increasingly sophisticated methods to harm the United States.”

As compared to the previous NCSC strategy released during the Obama administration at the end of 2015, the new orientation is to the threats posed to the interests of US imperialism around the world by digital technologies, online information and social media. In releasing the strategy document, NCSC Director William Evanina said that it represents a “paradigm shift in addressing foreign intelligence threats as a nation.” 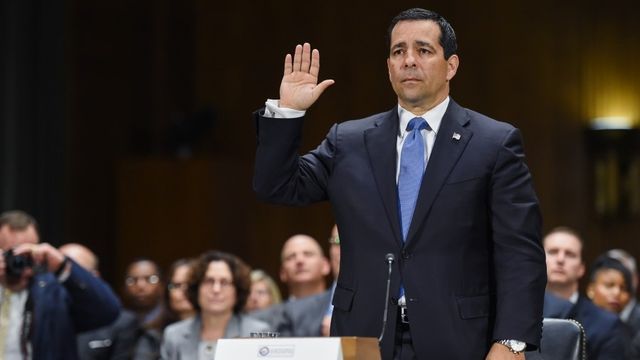 The swearing in of William Evanina as Director of the National Counterintelligence and Security Center (NCSC) on May 15, 2018 [Photo credit: dni.gov]

Pointing to the ongoing partnership between US intelligence and the technology industry on a range of operations, Evanina said, “With the private sector and democratic institutions increasingly under attack, this is no longer a problem the U.S. Government can address alone. It requires a whole-of-society response involving the private sector, an informed American public, as well as our allies.”

The NCSC Director goes on, “Sound counterintelligence and security procedures must become part of everyday American business practices. Implementing the strategy will require partnerships, information sharing, and innovation across public and private sectors.” Evanina, of course, does not mention the fact that no greater threat exists to “democratic institutions” and “an informed American public” than the US national intelligence apparatus.

The intelligence strategy document is very brief, uses generalizations and is short on the details of any specific threats. It also provides only broad outlines of its plan of action and does not go into the specifics of what counterintelligence measures will be taken to combat the threats it does enumerate. This is the modus operandi of the American intelligence agencies: say as little as possible, repeat the age-old lies about promoting “democracy” around the world and then get on with the secret and criminal business of US-sponsored mayhem and murder.

The NCSC strategy document lists the top foreign intelligence threats to US interests as Russia—repeating the well-worn but never proven assertion that the country is seeking to “instigate and exacerbate tensions and instability in the United States, including interfering with the security of our elections”—and China.

The document also mentions the US “adversaries” Cuba, Iran and North Korea as well as the organizations Hezbollah, ISIS and al-Qaeda only once before moving on to its primary concern: the “significant threats” posed by “the ideologically motivated entities such as hacktivists, leaktivists and public disclosure organizations.”

The inclusion of individuals and organizations involved in exposing government and corporate criminality—such as WikiLeaks and its publisher Julian Assange as well as other journalists and news sites both within and outside the country that are prepared to tell the public the truth—makes clear that left-wing, socialist and other alternative political websites will be the target of sustained US counterintelligence activities in the coming period.

Of significant concern for US intelligence is the impact of alternative and socialist political ideas and perspectives being disseminated among the US population under conditions of growing class conflict, political hostility to the government and both parties of the capitalist ruling elite and distrust of the corporate-controlled media.

The NCSC document emphasizes “influence campaigns in the United States to undermine confidence in our democratic institutions and processes and sow division in our society, exert leverage over the United States and weaken our alliances.” This is the exact same language used by US intelligence during the concocted campaign over “Russian meddling” in the 2016 presidential elections. While no evidence was ever presented proving that the Russian state was engage in an “influence campaign” in 2016, the US corporate media incessantly reported and continues to report it as well-established fact.

The document then states that the influence campaigns “are designed, for example, to sway public opinion against US Government policies or in favor of foreign agendas, influence and deceive key decision makers, alter public perceptions, and amplify conspiracy theories. … Our adversaries regard deception or manipulation of the views of U.S. citizens and policymakers to be an effective, inexpensive, and low-risk method for achieving their strategic objectives.”

It then states that US adversaries are using “a range of communications media to enable their covert influence campaigns. Using false U.S. personas, foreign intelligence entities develop and operate social media sites and other forums to draw the attention of U.S. audiences, spread misinformation, and deliver divisive messages.”

The targeting of “hacktivists, leaktivists and public disclosure organizations” in the new strategy of US counterintelligence makes it clear that a major assault on First Amendment rights of free speech and freedom of the press is being prepared. Due to the global nature of the internet, online publishing and social media, it is impossible for US state agencies to make a clear distinction between what it considers “foreign” and “domestic” threats.

Proof that the blurring of national boundary lines of counterintelligence is already underway was evident in the statement made by NCSC Director Evanina at a gathering of cybersecurity officials on February 4. As an example of the actions to come, Evanina presented the Justice Department’s recent charges against the head of Harvard’s chemistry and biology department, Charles Lieber, for making false statements about his participation in a Chinese research program.

Furthermore, the use of the Espionage Act against individuals—including former NSA contractor Edward Snowden, who revealed the massive and illegal surveillance of the public by the state—for leaking information related to national security is part of the escalation of state repression against whistleblowers.

The Trump administration brought multiple charges against Assange on May 23, 2019 as part of the campaign to have the WikiLeaks founder and editor extradited to the US from Britain.

Assange faces a 175-year prison sentence, or possibly the death penalty, in the US for courageously exposing the crimes of US imperialism against the people of the world. Meanwhile, whistleblower Chelsea Manning has been imprisoned for nearly a year for refusing to testify against him.

The defense of basic democratic rights such as free speech and freedom of the press—and the immediate release of Assange and Manning—requires a mass political struggle by the working class internationally against the drive by the capitalist system toward dictatorship and war and for the abolition of the NSA, CIA, NCSC and all other such organizations.